Progress is happening on the 66 I blogged about earlier.

Step 1 - I stripped it down to bare bones 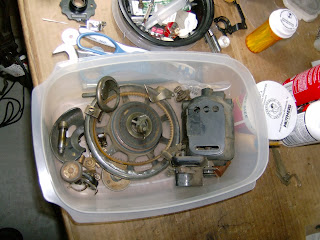 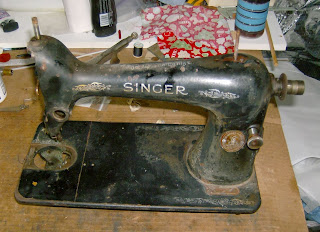 Step 2 - Cleaned all the old brown scum off and polished any brightwork that couldn't be easily removed.  Notice the many rust spots on top, I'll get back to them later. 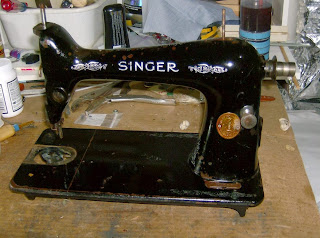 Step 2 - Cleaned up all the removed parts and reinstalled.  See the red felt in the hook area? That is there as an oil reservoir to supply lubrication to the hook. Many owners think it is a ball of lint and pull it out. Some day I will work up a tutorial on how to replace that felt. 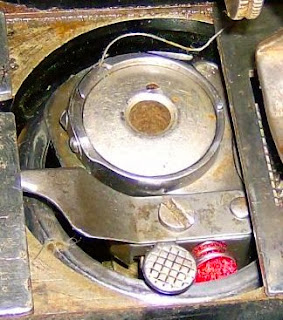 Step 3 - I don't think I'll reinstall this motor, that wiring looks like an accident waiting to happen. 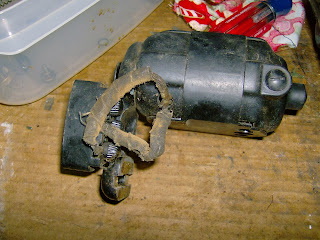 I'm sure I have a comparable motor in my motor tub. 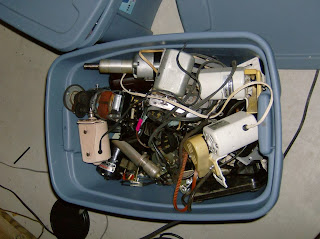 Step 4 - I applied rust converter to the rust spots. 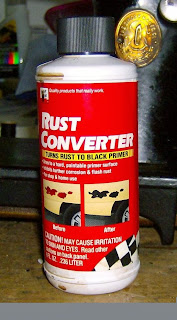 This converter is advertised to turn rust into black primer. While flat black spots are not the most desirable, they are better than rust spots. I think the rust converter would have done an even better job except that I had wiped down the head with sewing machine oil before applying the converter. I wiped the paint down with degreasing wipe but that wouldn't get the oil soaked into the rust. If I had thought, I would have done it in the reverse order. 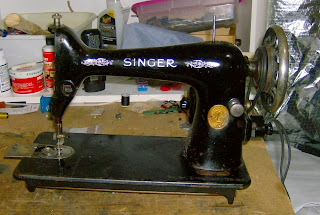 I still have to clean and reinstall the tension assembly, bobbin winder, and faceplate.  Then comes the job of testing and adjusting. I think it will be finished soon, glad I didn't have any other machines show up for servicing while I had this one in pieces.

Was that electrical tape wrapped around the motor wires? I love old sewing machines but I don't think I'd take on something like this. You're a brave man. That rust converter was an really good idea! I'll have to keep that in mind. My Singer 185K has the red felt in the hook area. Figured out what it was when I finally got a manual.

Good eye - there is no insulation on the motor wires except electrical tape. I would risk getting sued if I returned the machine like that! I swapped out the motor and some day when I have spare time, I'll re-wire it.-Ed

Do you restore all these sewing machines? This would make a great gift for my wife.

I've seen a couple Singer 66s for sale recently. Didn't buy either. One was overpriced. Both needed the wiring replaced. These machines have a nice long bed. I'm guessing that would probably make them well suited for quilting. From what I've read Singer made a ton of these machines. I've got a Singer 185k. Pretty sure (mechanically) they're the same machine.

Hi
I was wondering if you could show how you re assembled the singer 66 bobin winder. I have a 1906 singer 66 bobbin winder in pieces and can't get the springs back in place. there are 3 for this machine. Thanks for your blogs!
Cindy

I could but This blogger has already spent a lot of time doing just that:

Hi Ed, what do you use for step 2, to remove the "brown scum"?
Cheers, Sarah

I use two main cleaning products. The first is a spray-on upholstery cleaner, Tuff Stuff. You have to be careful with it on the old machines with gold decals, some have had a problem with decal degradation using Tuff Stuff. I have not experienced any problems with the cleaner. After Tuff Stuff has cleaned away most of the grime, I follow up with Go-Jo hand cleaner. The cream hand cleaner dissolves greasy dirt and leaves a nice shine on the machine. If you want to try it, the type without pumice is gentler on painted surfaces. -Ed

I haven't found the update (so forgive me if it's there and I didn't look far enough) but I'd really like to know how to replace that little piece of red felt in the spring in the bobbin case. I just got a 66 and the felt is already gone.