Even though it has the slide plate that turns under the seam allowance, I really like my 385.17881 Kenmore because it is so smooth and quiet. 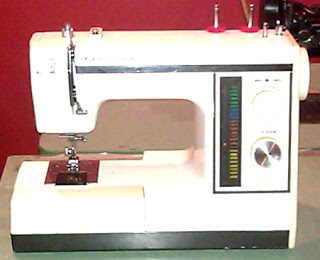 I always consider those traits to be an indicator of the quality of the machine.  Unfortunately, when I got it, the stitch length dial was very difficult to turn and I tried to loosen things up with a heat gun, melting some teeth on the plastic gear behind the stitch length dial.  I was able to reposition the gear so that the missing teeth were  not where they would affect stitch length selection, but the dial still turns very hard and I only have stitch lengths of 10-12.  I have been looking for a replacement for that machine, hoping to find the exact model needing work so I could cannibalize parts from my current machine to rehab the new one. 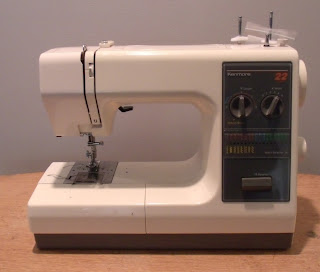 When I received the 385.1684180, I saw that it appears to have been well-used, but not abused.  The light bulb was burned out and the plastic bushings that hold in both spool pins are broken.  Sears Parts Direct had the bushings in stock and they are on the way to me.  The bobbin area was very clean, making me think the machine had been well cared for, but when I opened the bottom covers, a lint ball the size of a plum fell out!  It had been cleaned from above, but never went in for a professional servicing.  There was also a lot of gummy substance on many of the surfaces underneath, including the hook gear.  I tried to clean it off with mineral oil, alcohol, and several other substances but scraping it off seemed to be the only way to remove it.

Those issues  were easy to fix but one was more difficult - it would not stitch in reverse.  Pressing the reverse button had no effect, it just kept going forward.  Tracing out the linkage from the Reverse button, I found that there are two springs and a collar that slides along the hook shaft. 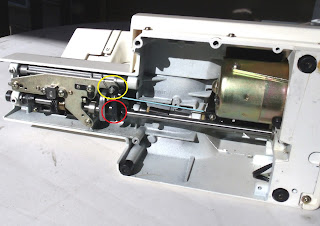 When the collar is to the right, the machine sews forward.  When the collar slides to the left, the feed dog travel is altered so the fabric feeds in reverse.

I could feel that the collar was not moving freely and spent two days trying to free it up.  After lubing and exercising the collar and hook shaft for hours with no results, I accidentally knocked the arm from the weaker spring out of its track and found that the collar itself was actually free-moving, it was the arm from the weaker spring to the collar that was binding.  I had oiled the pivot point of that arm in the very beginning but that was not enough.  I removed the arm and spring, cleaned everything well and re-lubricated.  The Reverse button now works as advertised and the machine sews backward as well as forward. 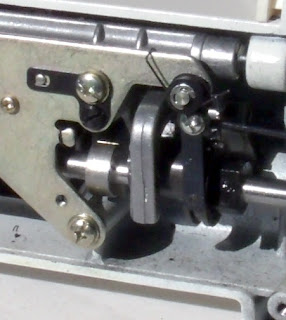 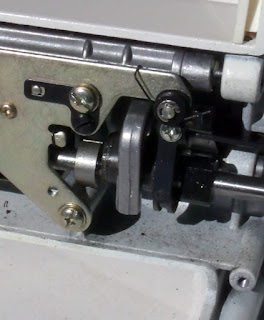