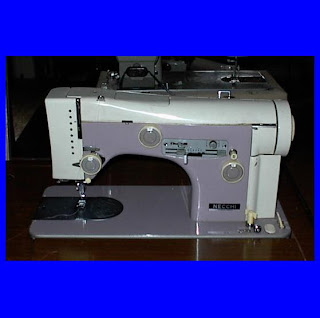 Before I became hooked on industrial machines, my favorites were Necchis. Necchi was one of the first, if not the first, to introduce zig zag machines to the home sewer and the Supernovas of the late 1950s had decorative stitch capabilities that did not show up on most other manufacturers' machines for another decade. All you have to do is sew a short seam on a Supernova to know immediately that all the parts are flawlessly machined and fit together properly. The rotation of the balance wheel is smooth as silk and the machine doesn't make enough noise to wake a sleeping cat. Unfortunately, this precision comes at a price - there is so little space for oil between the moving parts that Necchis must be frequently lubricated to maintain their efficiency. The needlebar swivel on the zig zag models is a particularly sensitive to lack of lubrication and will freeze up tight if ignored for too long. Probably half the Necchis I have acquired had frozen needlebar swivels which took hours of oiling and persuading to get them moving freely again. I suspect this is the reason that many sewers abandoned their Necchis, the American and Japanese models of the time could sew for months or even years without being oiled.
Necchi has passed through several phases, but the machines made in Italy before the Age of Plastic are, in my opinion, the best-engineered and most well-built sewing machines ever made. The models that fit in this category are the BF, BU, Mira, Nora, Lelia, Supernova, and Lycia. Some of my Necchi collection can be seen at http://www.geocities.com/lamx . Beginning with the Lydia, Necchi began experimenting with plastic gears and camstacks that have disintegrated over time and need to be replaced. A replacement plastic Lydia camstack costs over $100 - about 4 times what the machine is worth on the open market. Sometime in the 70's, Necchi started having machines made in Japan and quality declined somewhat. The Japanese Necchis are okay, but not built to the same high standards that the Italian models enjoyed. After a short time using Japanese manufacturers, Necchi moved production to Taiwan and changed from selling sewing machines to boat anchors. I can't even comment on modern-day Necchis.
Posted by Unknown at 7:05 PM 236 comments: