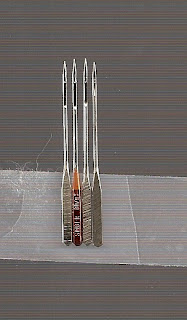 There has been more than the usual chatter on the sewing forums lately about needles. It seems that very few sewers know
anything about needles and the few who think they do are merely repeating urban myths that they heard from some questionable
source. I decided to perform some research and publish my results here. Before sewing machine and sewing forums sprang up on
the internet, I had a very limited knowledge of sewing machine needles. Thanks to folks like Bill Holman, who are willing to
share their years of experience, I learned enough to be dangerous, but still keep hearing stories about one brand of needle
being better than another, or one brand being longer than another so they won't work in certain machines. I dug through my
needle stash and pulled out samples of widely-used needles and put them on my scanner at high resolution to see what the
difference really is. I started this exercise with the preconceived notion that standard 15x1 needles are all manufactured to
the same specification, so they all had to be identical, and all the hype about one brand being better than another was just so much hogwash. I do know that there are different styles of needles - sharp, ball point, leather, etc., and some needles are manufactured a little off-center to aid in sewing knits, but a ball-point Schmetz should be identical to a ball point Singer, right?.
The usual argument is that Singer needles are a bit longer than Schmetz and, for some reason, that makes the Schmetz needles sew better. I took needles made by Schmetz and Singer and carefully lined them up on the glass of my scanner. I tossed in an Organ needle, too, because that's the brand I use most and wanted to see how Organ compares to the other brands. I also
have a box of very old Singer needles and tossed one of them in the mix to see how needles have changed over the years.
In the photo, the Schmetz and new Singer are the two center needles, the Singer being identified by the red shaft. The Organ needle is on the left, and the vintage Singer needle is on the right. I used a straight edge to align the shafts and found that all the stories I had heard about Singer needles being longer than Schmetz are all hot air - both modern needles are the same length. Additionally, the distance from the top of the shaft to the top of the eye (the critical distance for timing) is the same on all four. The distance from the eye to the point of the Organ needle was just a tad shorter than both the Singer and Schmetz, as was the vintage Singer needle. The eye of the vintage Singer needle is roughly half the size of the eye of all the modern needles, and the vintage Singer needle has no scarf.
Here are my conclusions:
- Modern Singer and Schmetz needles are identical.
- Of the three brands, no one modern needle appears to be better than another.
- Organ needles appear to be identical to Schmetz and Singer, except that the distance from the eye to the point is shorter. If you like Schmetz, try Organ at one-third the price and see if you can tell the difference.
- If you still have some old needles in the drawers of Grandma's treadle, you might be better off replacing them with modern needles. At least, save them to use with the older machine and don't "borrow" them for your new, computerized machine.
Posted by Unknown at 4:36 PM 12 comments: