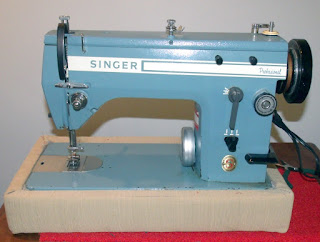 I have an industrial 20U33 that I like to sew on.  It is smooth, strong, and quiet and makes a perfect stitch.  It also has a 9mm zig zag, which I rarely take advantage of but I know it's there if I need a wide zig zag.
I have had it mounted in a power stand from a Singer 95-10 that went away years ago. 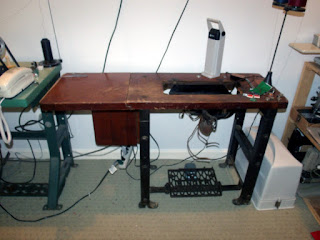 I like the table because of its solid wood top that I intend to refinish some day and the flip-up leaf that extends the sewing surface.  Problem is, the ancient clutch motor has four wires protruding from it and I can find no documentation how to hook up the wires to make the motor operational. 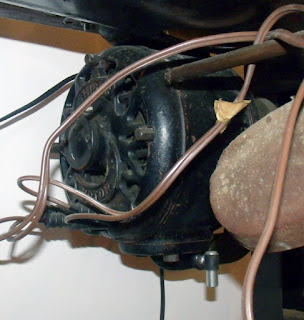 To substitute for the missing clutch motor, I installed my largest family machine motor - a 1.3 amp model from a White. 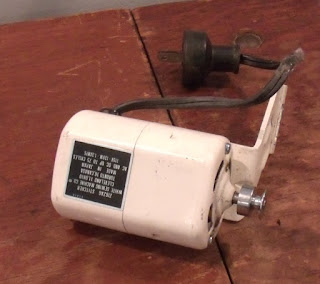 The treadle did not allow the foot control to be positioned in a comfortable location so I wedged it under the far end of the treadle and depress the treadle to actuate the speed control, just like I would if the clutch motor were working. 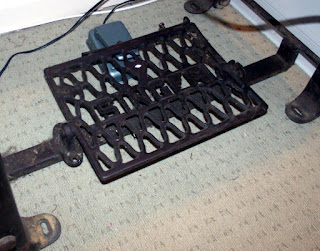 This setup allowed me to sew but there was no light.  I tried a stick-on LED light but it did not provide adequate illumination in the proper direction. 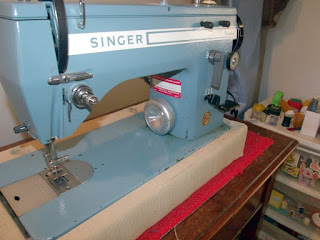 A tabletop Ott Lite provided illumination but I was constantly knocking it over.
To the rescue was a Singer 252 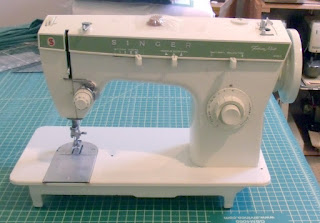 with a broken plastic gear in the upper section. 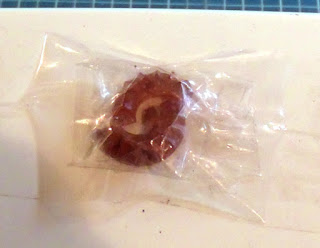 I was able to find a replacement gear but see no way to replace it without removing the main shaft - a task I do not wish to undertake - so it is now a parts donor.

The first donation was the foot control, motor and attached light.  They fit perfectly on the 20U33 and I now have a machine I like to use with enough light to see what I'm doing. 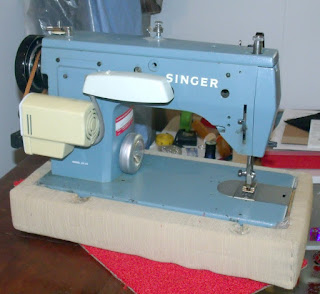 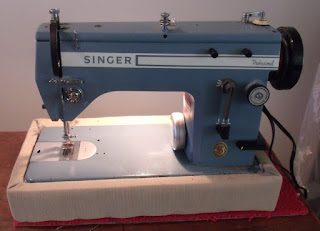 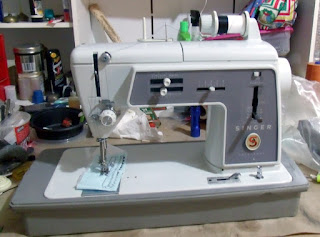 This week, I had the pleasure of working on the first model of Touch & Sew made by Singer.  It is a model 600 but the model number is not displayed in the usual place, it just says "Auto-Reel" and the wind-in-place bobbin is placed in wind mode using a push-down button. 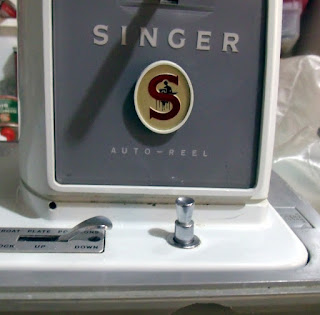 Later versions of the 600 and its descendants had the winding mechanism actuating button under the slide plate.

When I saw the machine, I assumed there would be little to do other than oil and grease because it looks as though it has been used very little.  No paint chips, scratches, needle strikes, or other signs of wear.  It was noisy running, indicating that some time had passed since its last lubrication, so that's where I started.  After oiling and greasing, I tested the various functions and found that (a) the release mechanism was not latching and 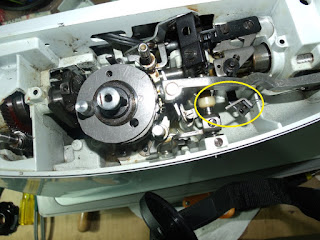 (b) the needle would not return to the right in zig zag.

The zig zag problem was easy to figure out, there was a broken spring lying in the bottom of the housing.

I couldn't find a new replacement and none of my parts machines used the identical spring, even though the part number for the spring in the 500 is the same.  I found a similar spring in my parts bin that was longer and cut it down to the same length as the old spring.

After replacing the spring, the release mechanism would still not latch and clattered back and forth with every rotation of the shaft.  The service manual tells how to adjust that mechanism but says, "Be sure stitch pattern selectors are properly engaged.  Otherwise, machine will not engage when in operation." I looked at the pattern selectors, and, sure enough, the lower selector was not popping out when moved to position "A". 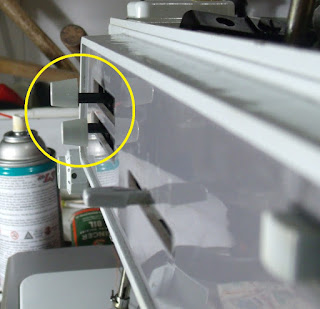 and I assumed that the lever would not lock into the slot because of that. 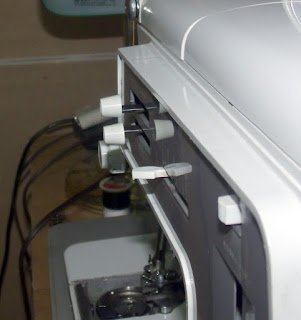 On to testing the stitches and I noticed there was less than 1/4" clearance under the presser foot.  Normally that is an easy adjustment, but on this series of machines, the presser foot pressure adjuster 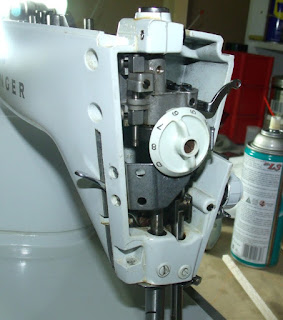 must be removed to access the presser bar clamping screw. 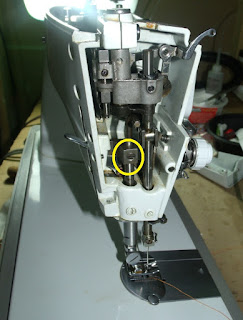 Removing is not a problem, reinstalling is a bit troublesome.

With all those adjustments and repairs, straight stitch worked properly but zig zag would only catch on one side.  That normally means that either the presser bar height is incorrect or the hook is not timed to the needle.  In this case, it was the hook timing.  When the hook point was supposed to be even with the needle, it was about 10 degrees off. 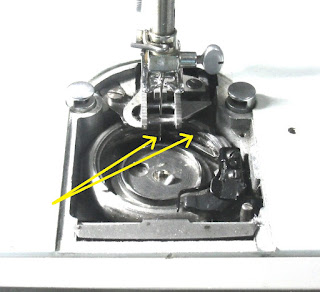 After spending much of my Labor Day weekend tinkering with this machine, today I finally put it all back together, wiped off the greasy fingerprints and sewed a successful test swatch.  I hope the next one is a bit easier, although I enjoyed the challenge and learned a lot from this one. 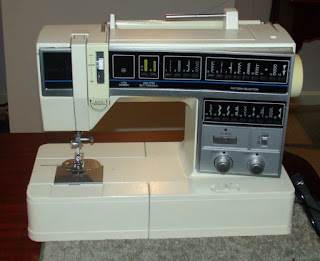 Yesterday, a friend gifted (cursed?) me with a Singer 6267.  She said it had been in storage for some time and then left in a hot car for a day and the next time she ran it, it was stiff and ran slow.  She replaced the machine and now, if I didn't want it, she would donate it.  It came with a goodly assortment of accessories and one of the two manuals. 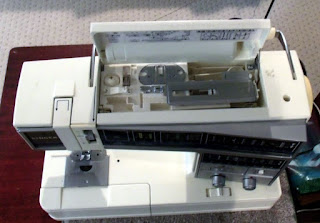 Being a sucker for a free sewing machine, I took it home.  I cleaned lint out of the gear teeth in the lower section and oiled all the spots I could get to but cannot figure out how to remove the top lid.  If anyone knows the secret to that, please clue me in.  I was able to download the second manual from Singer so I could figure out how to wind a bobbin and remove the bobbin case for cleaning.

Anyway, it sews fine, all the stitches I tried worked fins and it sews with all the speed I would expect, albeit a bit noisy.

The only thing I can find wrong is the slot to the right of the upper tension adjustment, where the thread is supposed to lie, is too tight for thread to comfortably fit in the slot, it has to be forced.  I need to find where to open up that slot. 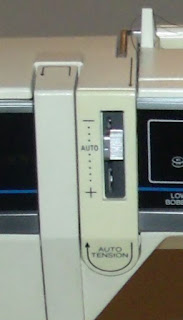 I sewed a couple of quilt blocks for a pillow and everything worked as advertised. 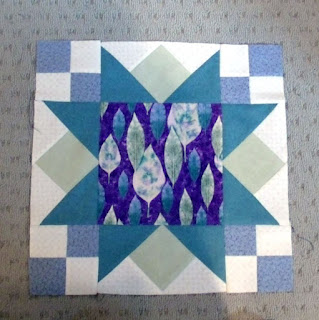 The jury;s still out on whether I will keep this machine or not, it's newer and more complicated than the rest in my stable and it has the type of slide plate that folds back the seam allowances as you sew.  I can get used to lifting the fabric as a seam allowance slides across the bobbin cover but don't feel that I should need to do that, I have plenty of machines that don't require me to trick them into sewing well.  I do like the LOW BOBBIN warning light, too many times I have sewn seams with no thread in the bobbin. 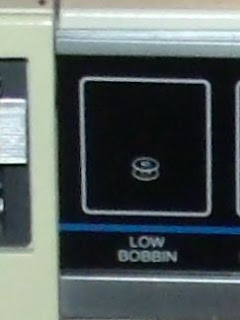