Lots has happened in the past few weeks.

We closed the quilt shop. After 18 months with not a single profitable month, we got tired of continuously pouring our savings into stock, rent, and other expenses and pulled the plug.  It took two weeks to bring all the remaining stock and fixtures home and now we are trying to sort it all out.  Kathie should not need to buy fabric for years to come. 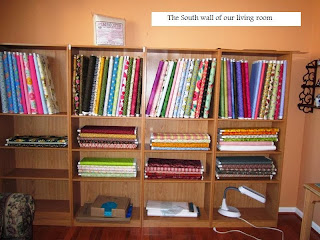 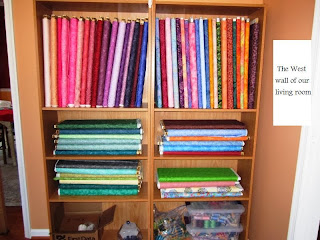 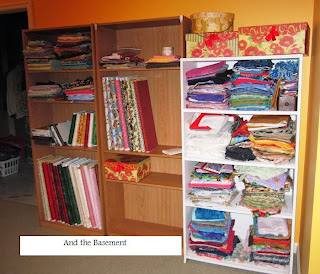 I have been loading the remaining stock into Kathie's Etsy shop at discounted prices.  A link is at the side of the page.

I split off my vintage sewing machine items from Kathie's store and set up my own Etsy shop with just sewing machine-related items. I have lots more to list but it's a start. I have placed a link to my shop at the side of the page, also.

I have eight Singer motors waiting to be re-wired but won't get to them anytime soon.

The 66 is Finally Finished!

I spent most of the day putting the finishing touches on this machine.  All I had left was the tension assembly and the bobbin winder and it would be ready for testing.  The bobbin winder went without a hitch. I love those old bobbin winders with the guide finger that precisely positions the thread winding on the bobbin so it comes out perfect. I'm sure that economics was the reason they were replaced with the lower quality contraptions on later machines because there are  many more parts and moving parts on the older winders.

On to the tension assembly - when I separated the tension discs, there was a piece of thread lodged between them, possibly the cause of some previous tension problems. 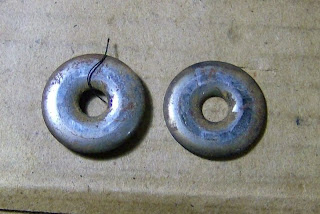 I cleaned and reassembled the tension assembly and installed it. It regulated tension all right, but did not release when the presser foot was raised. Do you see anything wrong with this tension assembly component? 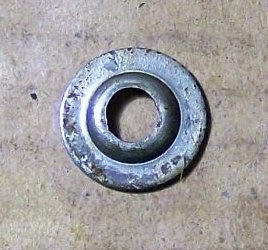 Neither did I the first time around but I knew there should be some piece with a bar passing between the sides of the split stud. The pin in the tension assembly needs something to push against to release the spring pressure from the outer disc.  The part should look like the one on the right here 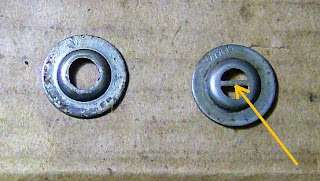 I threaded it and found that the upper thread would not pull up the bobbin thread.  The hook was a bit out of time from being disassembled for cleaning. After re-timing the hook, the machine seemed to be binding. I had adjusted the feed dog centering and tightened the screw back down too tight. with the machine running smoothly and sewing like it shoud, I noticed that one of the motor wires had a gap in its insulation so I had to replace the motor again and find a belt to fit. It seemed like it was one thing after another and took all day. We are in the middle of an ice storm, so I wasn't going anywhere anyway, but I could have found other tings to do with the time.

Here is the finished product. Not the best looking machine I have ever put out the door but considering the condition it arrived in, not too bad. 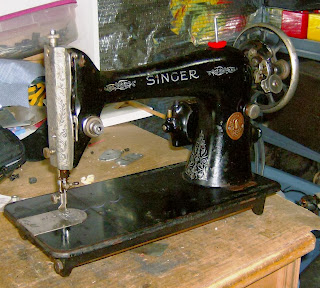