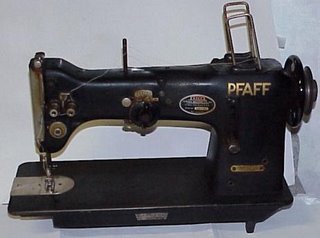 The main difference between industrial machines and family-use machines is that industrial machines are designed to perform ONE task and perform it very well. Family-use machines are designed to do everything and as a result perform some tasks inadequately. A perfect example is buttonholes - read all the postings on various forums complaining about the poor quality of buttonholes formed on family-use machines, then look at any item of commercially produced clothing and see what the buttonholes look like. The machine that made those buttonholes will do nothing but sew buttonholes 16 hours a day, 5 days a week, but don't try to use it to install a zipper! The vast majority of industrial machines are straight stitch only because that's the kind of sewing that's performed most in factories. What you lose with the household machine is the strength, speed, and consistently perfect stitches obtained with an industrial sewing machine. In most cases, the industrial sewing machine has two distinct parts: the sewing machine itself, and the power stand, consisting of the table and motor. Most manufacturers recommend that a one-half horsepower 3450 rpm or 1750 rpm motor be used on their machines. Using this powerful motor, the machine can achieve a fast sewing speed by using pulleys. On some industrial machines you can achieve a sewing speed of 4500 spm (stitches per minute) or more. Family-use sewing machines have their motors attached to the body of the machine. The motors are usually rated at one-tenth horsepower. The power is limited because of the motor size, so they use a pulley or gearing system to increase the power while producing a slower stitch speed. Most household sewing machines sew at 800 spm.
Sometimes terms like "semi-industrial", "heavy duty", and "industrial strength" are used to imply that a household sewing machine has the power of an industrial. In these cases, the buyer should verify the actual motor power and stitching speed. That said, the Brother 1500 series and Juki 98 series are straight stitch machines possessing some of the features of home machines, like needle threaders and thread cutters. Their throats are slightly larger than standard family machines, making them popular with quilters who are unwilling to upgrade to a true industrial machine. The Bernina 950 probably has the most features on a "semi-industrial" - 21 stitches, 5-step buttonhole, and the 1/2 hp motor will drive it to form 2000 stitches per minute but throat area is no larger than a home machine. At around $1700, that would be my choice if I wanted a bunch of functions combined in one ruggedized machine. However, for the same money, I would buy a used straight stitch industrial ($250), a used zig zag industrial ($600), and one other specialty machine, depending on the sewing you do (buttonholes, grommets, quilting). As for reliability, the major brands are probably best, Pfaffs, Jukis, Brothers and the older Singers are the ones I have used.

If you are looking at a used machine, check the price of any needed parts before buying. I bought a used Pfaff 144 double-needle machine that was missing the feed dog. Knowing that feed dogs for Singers cost in the neighborhood of $20, I willingly gave the $135 for the Pfaff. When I went to order a Pfaff feed dog, the dealer gave me a quote of $695 for just the feed dog! He told me I was lucky I didn't need a throat plate too, because that would add another $350! I have never owned an Adler, but hear that replacement parts for them are similarly priced.
Posted by Unknown at 2:39 PM 5 comments: