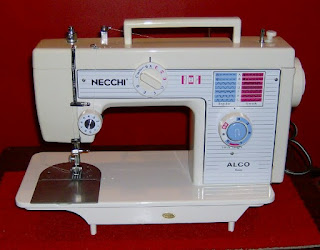 In the thrift shop the other day, I saw what I considered to be an anomoly - a sewing machine with the names Necchi and Alco, both on the same machine.  I had been under the impression that the Alco and Necchi names were connected through the same distributor, but this is the first time I have seen one with both names on it.

This one is a 524FB (FlatBed), made in Taiwan. Sales documents that accompany the machine indicate that it was purchased in May, 2000 at one of those "Liquidation Sales" in Florida. 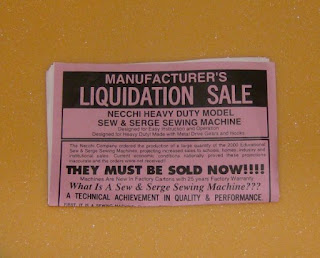 I thought the 524FB was considerably older than that, my old Blue Book shows production beginning in 1991 and models usually become obsolete in about 7 years.  I guess this one could have been old, unsold stock and that's why it was dumped at a motel sale.

This machine was touted as a "Sew and Serge" machine.  The "serge" function is merely a zig zag or overcast stitch plus a bolt-on cutter that is powered by the needlebar to give the impression of an overlock stitch.

The machine was sewing okay but making a buzzing sound that I didn't like. I removed the end cover, thinking that the motor bearings might be bad. I took off the belt and ran the motor by itself and it didn't buzz. When I put the belt back on, I noticed that one of the motor mounting studs was in a position where the cog belt was rubbing against it. 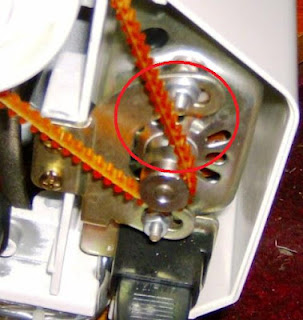 Repositioning the motor cured the problem.
Posted by Unknown at 11:37 AM 39 comments: