A lady dropped off a sewing machine last week. She said it didn't sew, she had tried to sell it and got no takers, so I could have it for parts. This was my first view - a plain, white generic plastic carrying case.  I wonder what kind of machine is in there... 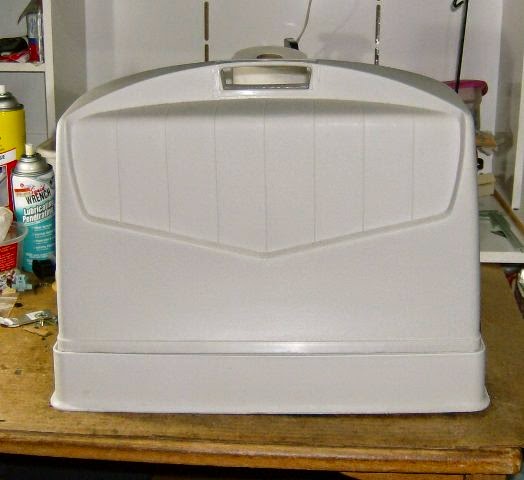 Well, that's unusual, a sewing machine with no obvious badge or manufacturer's name. 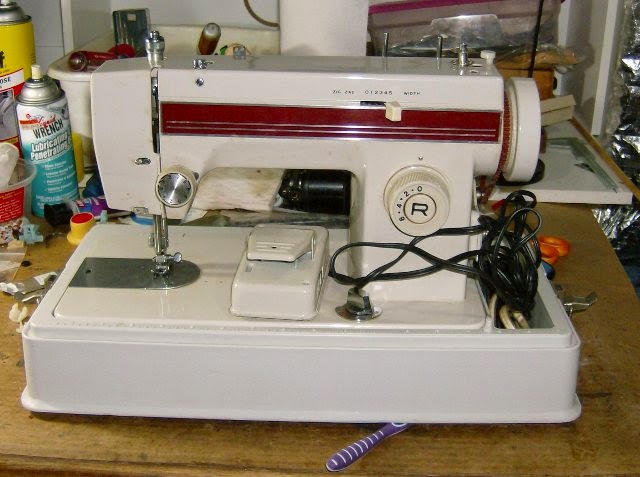 Maybe it's on the back...Nope, nothing 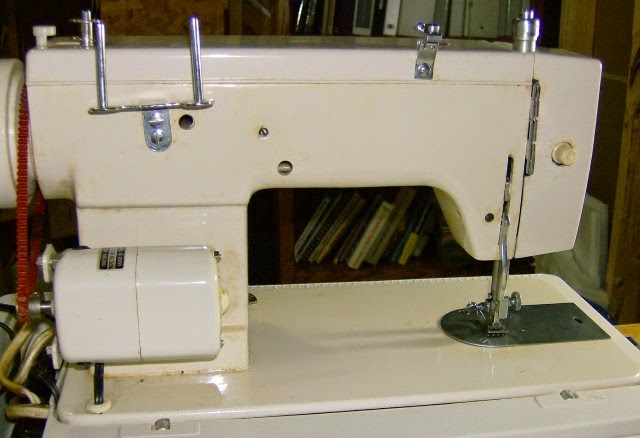 I'll tip it over, there's bound to be a manufacturer's logo or JA number...Nope, nothing there, either. 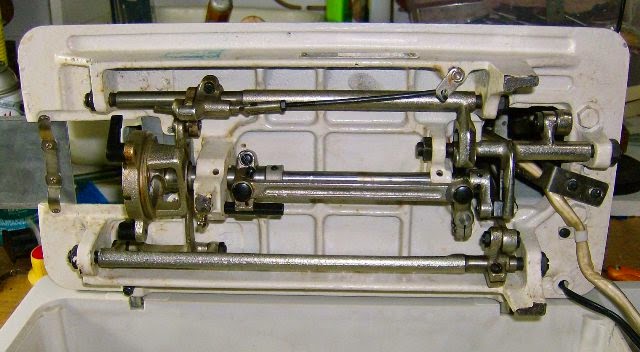 Here's the only identification information - a tiny sticker saying, "Made in Taiwan". 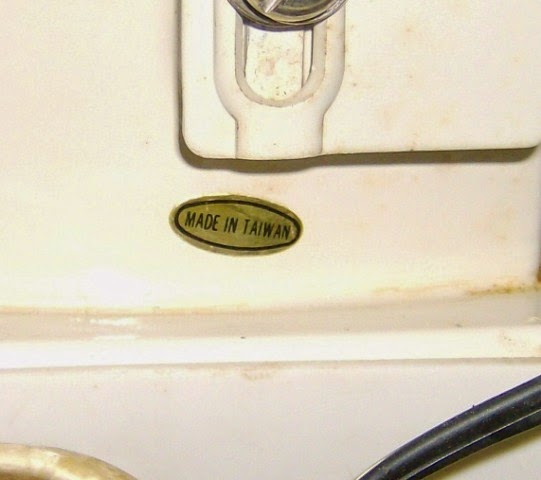 Tipping it over to look at the serial number, I noticed that the bobbin case was not installed properly.  That could be why it doesn't sew. 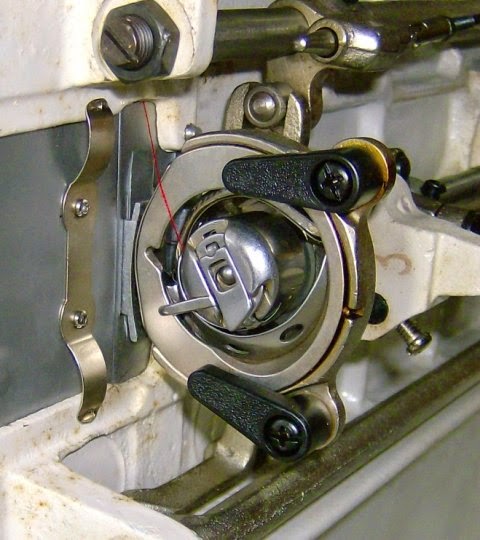 Removing the bobbin case and shuttle, I spied red thread behind the shuttle. Maybe that's why it doesn't sew. 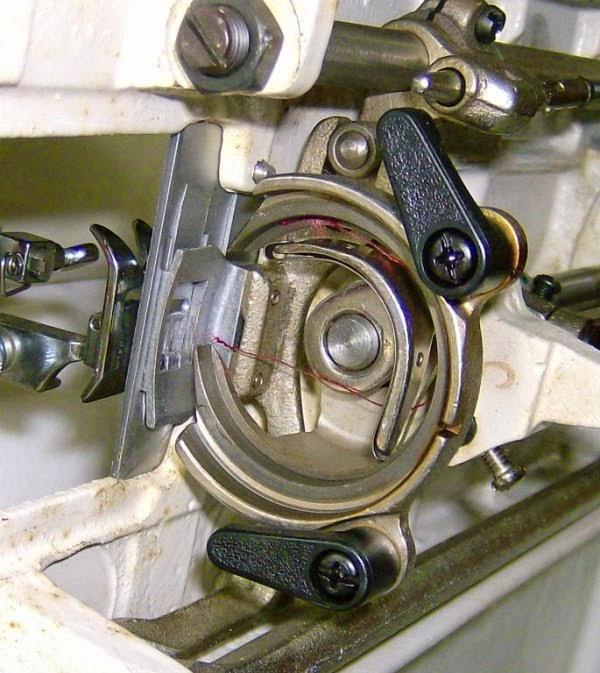 There was a serious burr on the point of the hook, so bad that fine abrasive wouldn't take it off.  I had to clean off the burr with a file, then polish with the fine abrasive.

After oiling, I threaded it up to test sew. First thing I noticed was that the tension did not release when the presser foot was raised. The paddle that presses the tension release pin on the back side of the tension assembly appears to be bent. 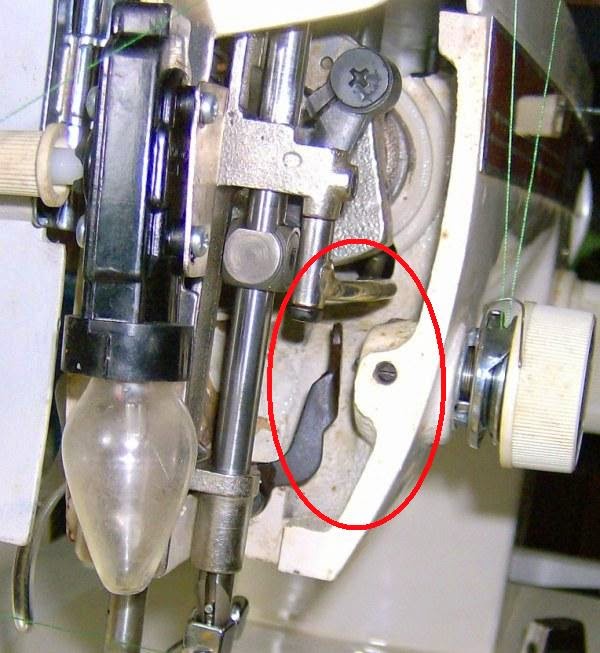 I tried to bend it back without removing the whole light/needlebar/presser bar/swing assembly but couldn't get it where it needed to be.  If I couldn't make the paddle reach the pin, maybe I could make the pin reach the paddle.  I disassembled the tension assembly and removed the pin from the front and cut a same-diameter finish nail to about 2-3mm longer than the original pin, that has worked for me in the past. 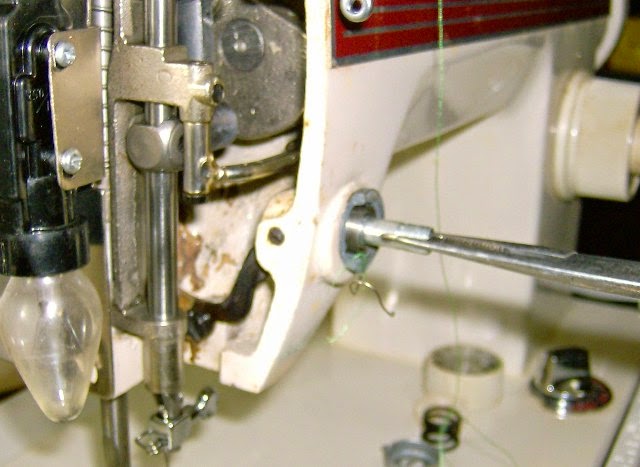 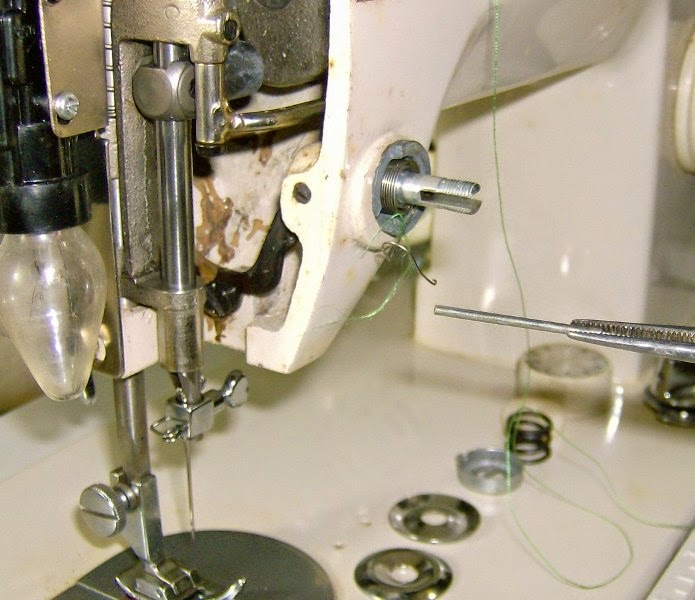 That still wasn't long enough, I guess I'll have to continue turning tension to '0' to thread the needle until I figure something else out or find a longer finish nail or bite the bullet and remove all the mechanicals to get at that paddle.

On the first test run, it sewed pretty well - a bit noisy, but changing the orange, toothed tractor belt for a smoother version quieted it down significantly. 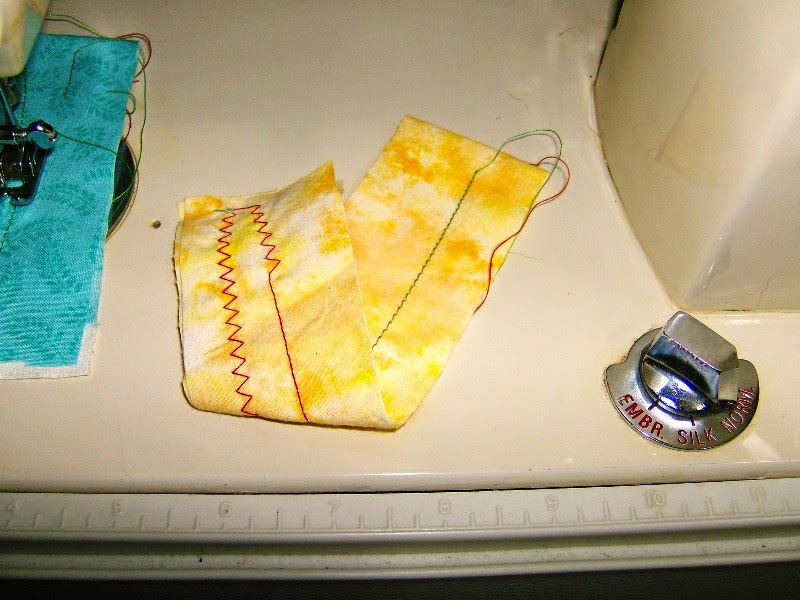 I learned that it is a left-needle zig zag machine, at '0' stitch width, the needle sits at the far left end of the hole in the throat plate; as stitch width is increased, the needle swings farther and farther to the right. That configuration makes it tougher for a quilter to judge a quarter-inch seam but having the fabric supported on three sides in straight stitching mode reduces the possibility of the fabric getting sucked down under the needle plate.

Now, I need to use it on a project to see how it performs in the long run.

Last week, a lady called having a problem with her Kenmore Ultra Stitch 12.  When I went to pick it up, she had a second machine belonging to a friend, a Kenmore 1720. 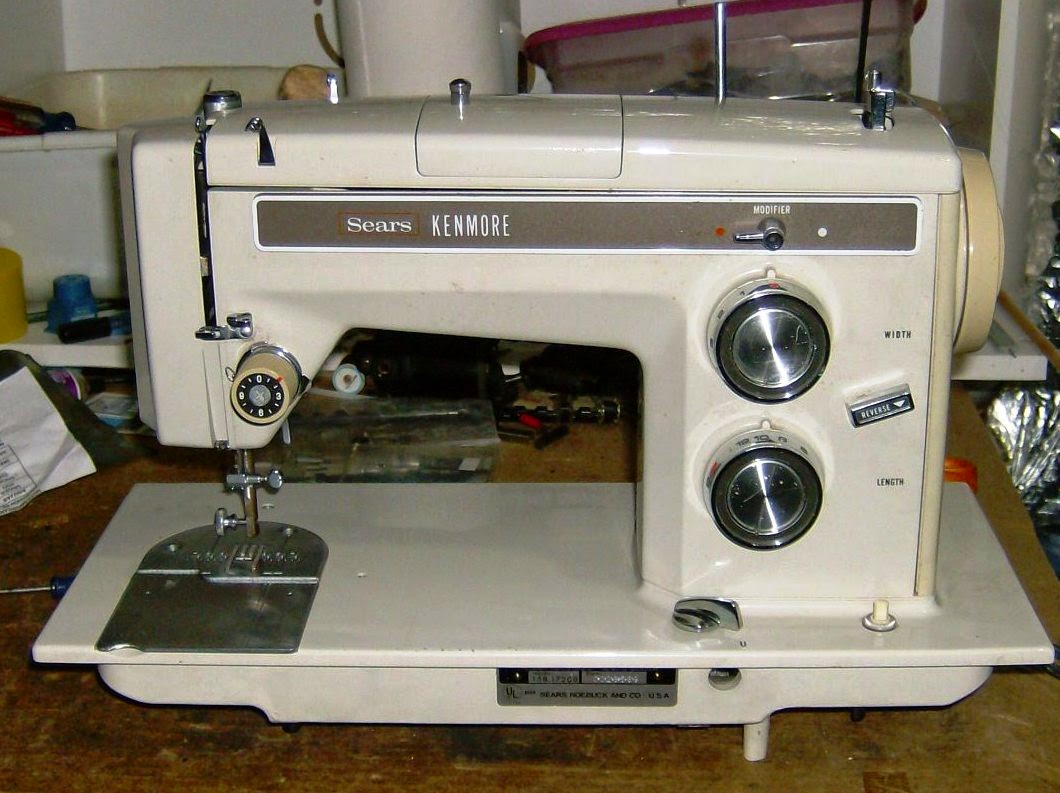 She said there was nothing wrong with it, it just needed cleaning and oiling.  The machine looks very well cared for and little used but it had a very loud clanking sound when operated.  Except for that noise, the machine ran smoothly and, with the bobbin case /shuttle removed, very quietly so I was pretty certain where the noise was originating from.  I opened up all the panels and oiled everything and, while doing that, found some thread wrapped around the knuckle of the thread take-up lever. 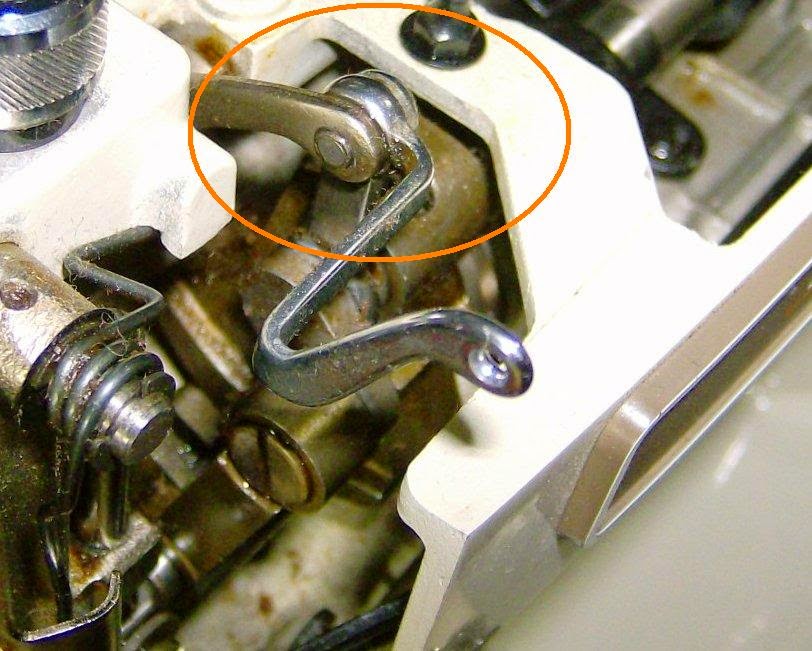 Here's where it gets goofy - AFTER I removed the thread, the machine locked up so tight that the motor wouldn't turn it over and it was difficult to rotate by hand!  I looked for additional thread clogs and re-oiled evrything with no improvement. To isolate, I disconnected the connecting rod that transmits movement from the main shaft to the lower section. 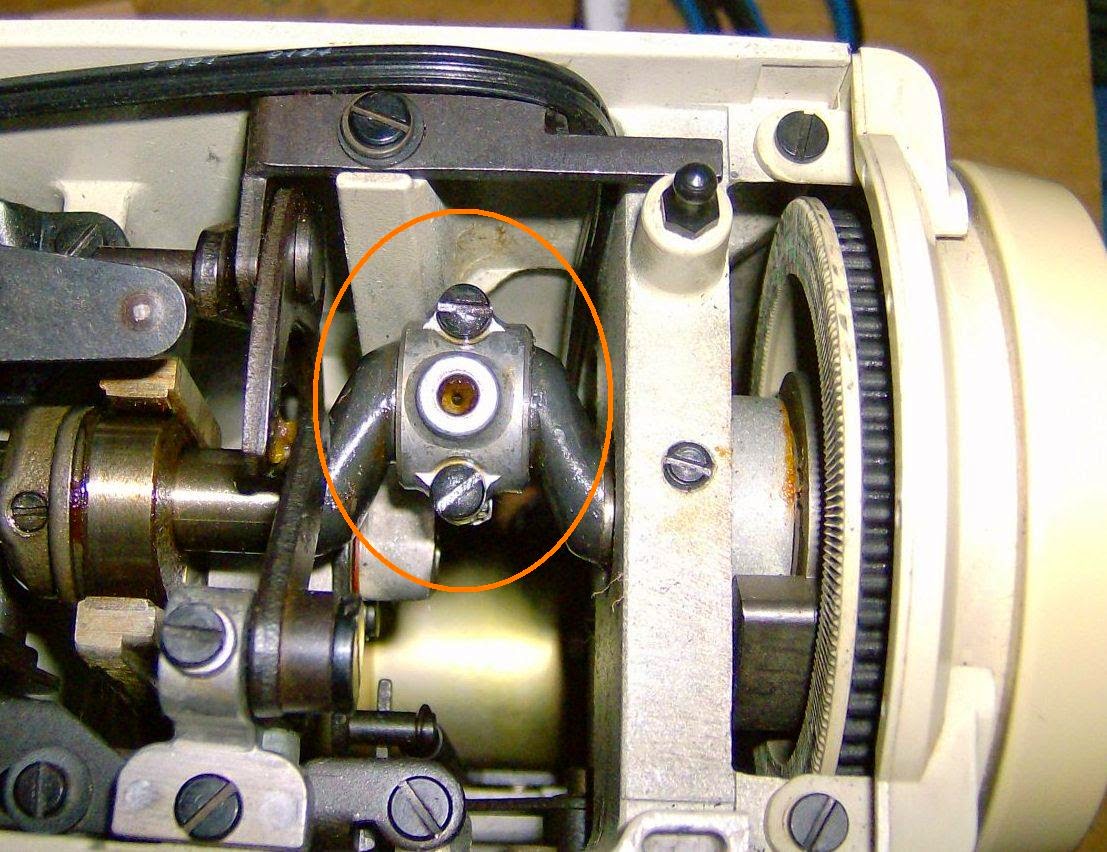 This cuts the mechanism in half and tells me whether the problem is in the upper or lower section.  It was in the upper section.  Having exhausted all my ideas, I doused the whole upper section with Liquid Wrench and let it sit overnight.  This morning, it seemed a bit looser turning by hand and, after a few revolutions, the motor took over and spun the shaft. I ran in the machine at top speed for about a minute and all the binding is gone.  I have no idea where the problem was.

Then on to the noise in the shuttle area.  The thread gap between the tip of the shuttle cushion spring and the shuttle should be just over the thickness of thread but this one was a good 1/8 inch. 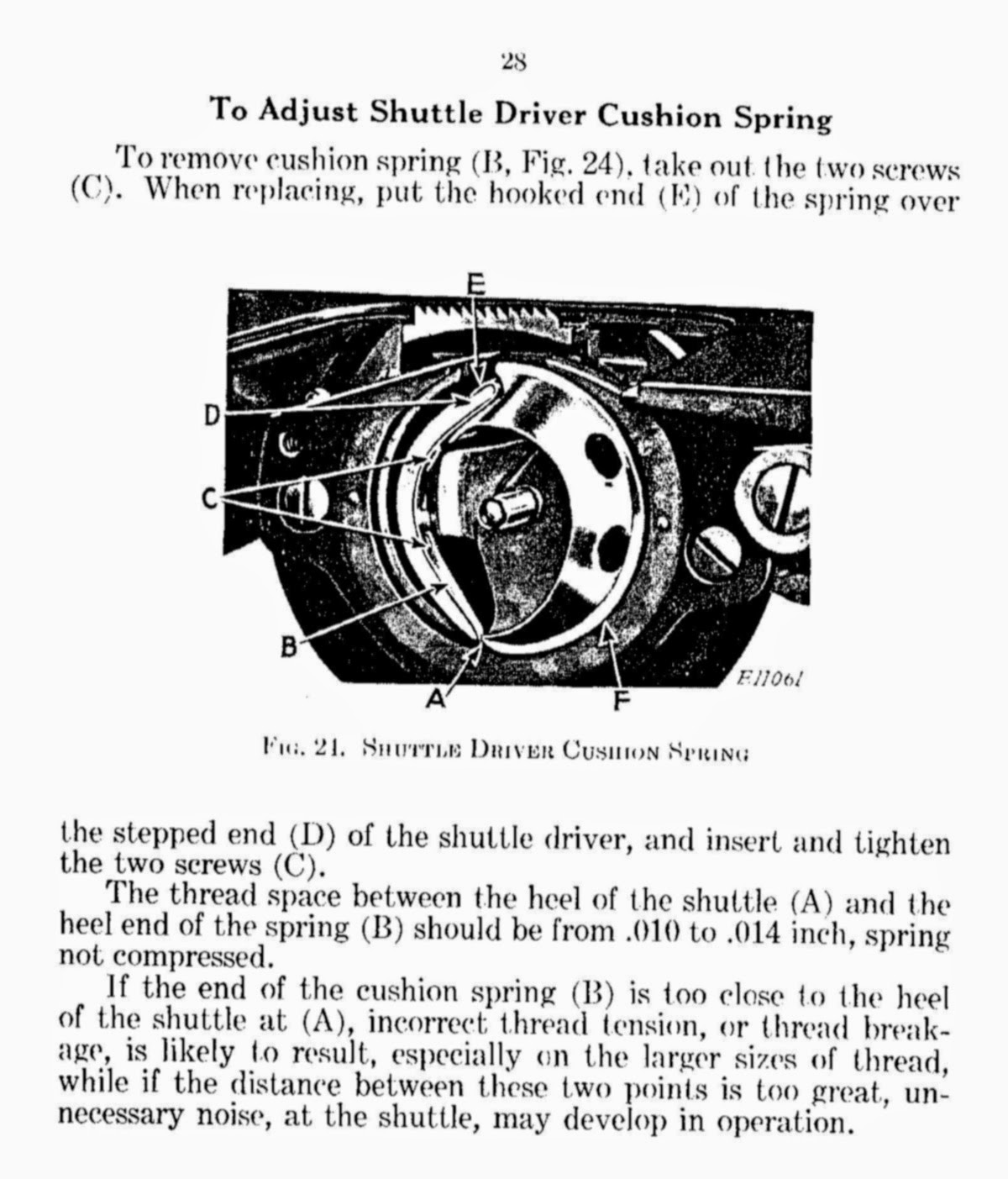 That explains the noise!  I went to bend the cushion spring to narrow the gap and found that there was no end - the end of the spring had broken off. 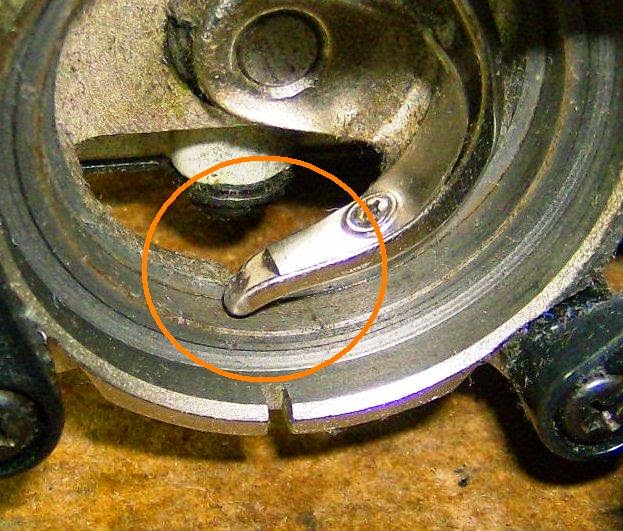 I rummaged through all my parts bins and could not find a single cushion spring. Apparently, that is something that needs replacing so seldom that I haven't kept any spares.  Then I remembered the Julia I am parting out still has the cushion spring so I cannibalized it but it is too long to work in the Kenmore.  Fortunately, my parts source has the springs and attaching screws in stock, so I can order replacements.

We had a community yard sale last weekend and I made a landfill contribution on Friday.  I now have a clear path to my 29-4 Shoe Patcher. 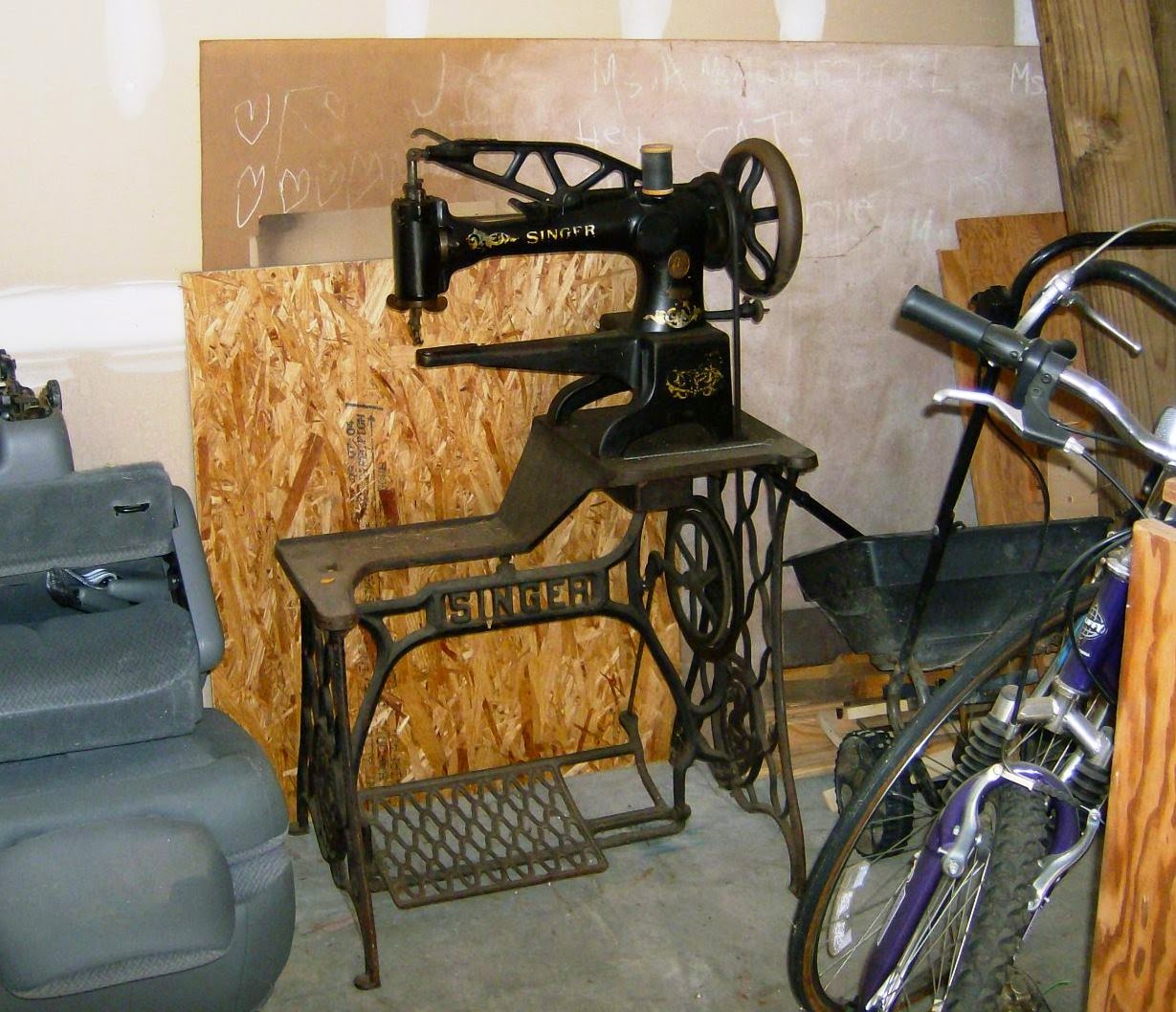 I picked this machine up at a local auction for $25 but would have paid $50 for someone to load it into my minivan for me - It is a MONSTER!  I was surprised to get the machine that sells in the $400 range on Ebay for such a low price, especially because it is treadle-operated and there were several Amish bidders in the house.
The decals are not complete, but more prevalent than many because these machines were used in shoe factories and saw a lot of use. 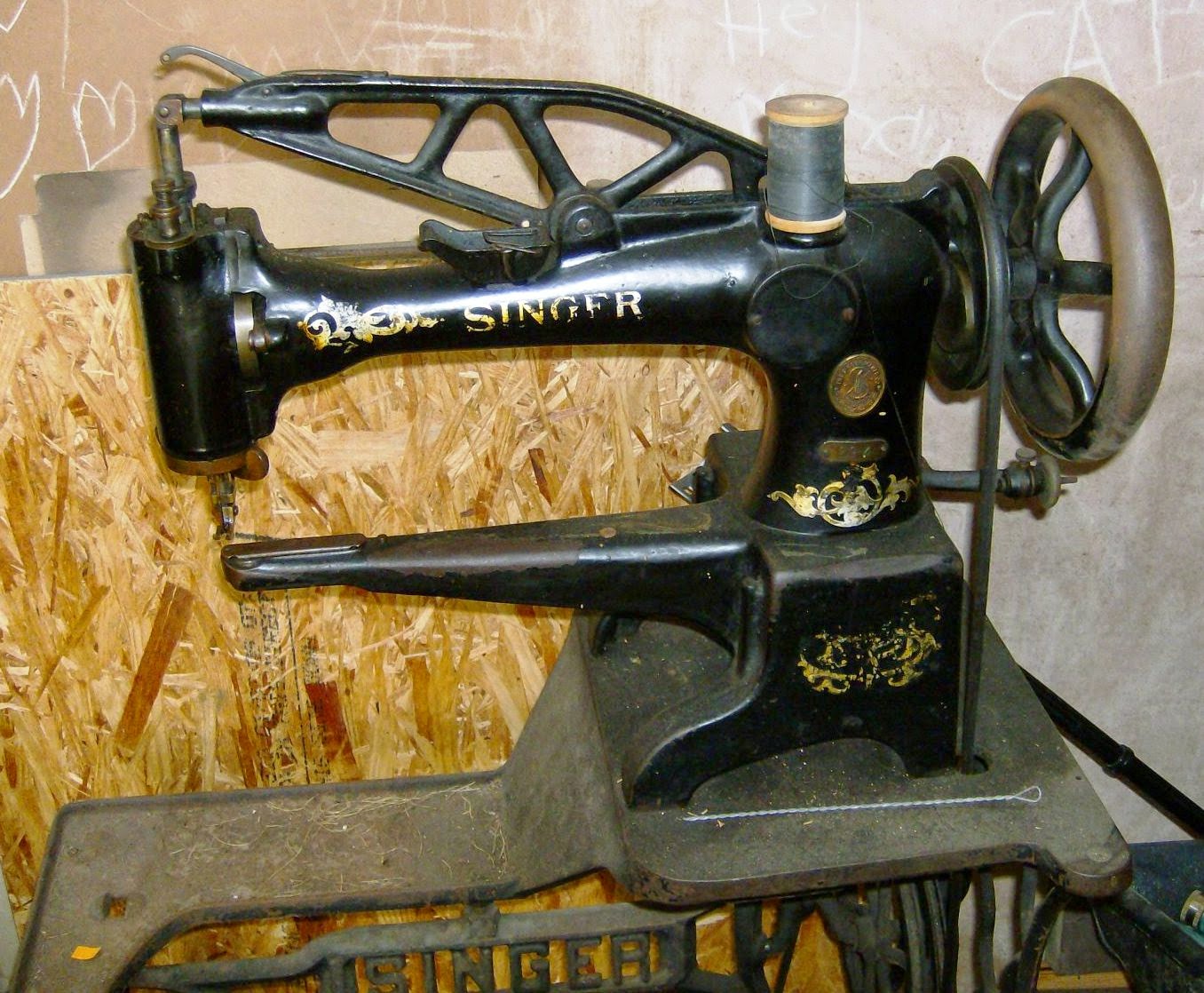 I took the machine home and put it in the storage shed, intending to get to it later - I never did.  When we moved to our present house four years ago, I put it in the garage and piled lawn furniture, bicycles, yard working equipment, and a table saw in front of it and have never dug it out to tinker with it. 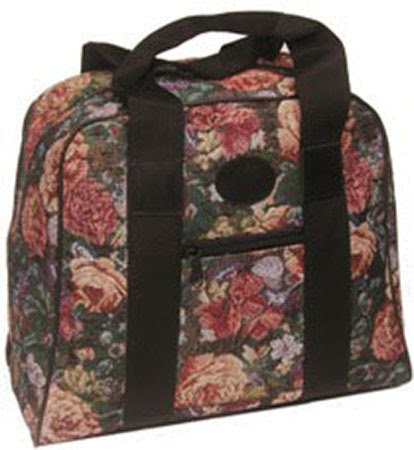 and one end of the zipper did not get caught in the sewing process. 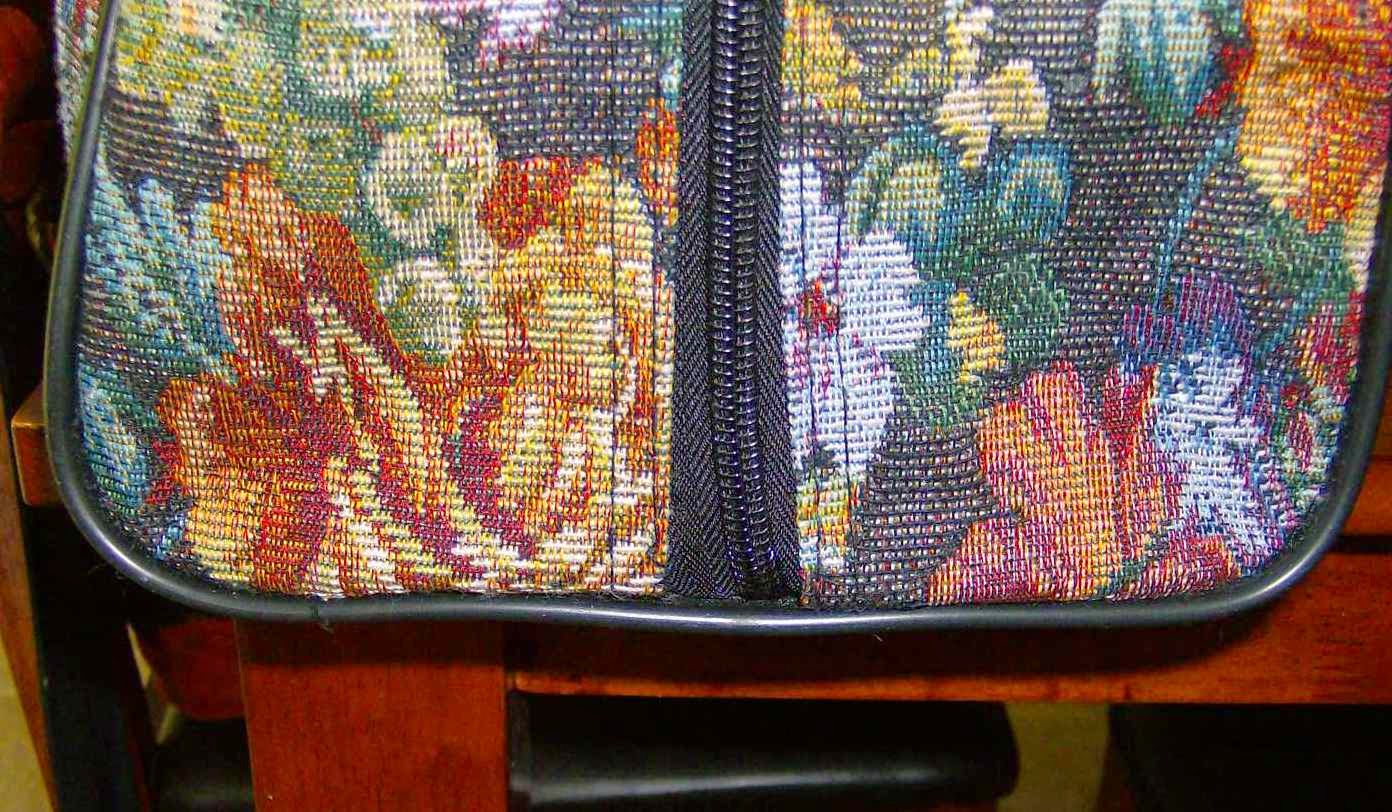 I tried to repair it on a flatbed machine but just can't get the fabric to lay down flat enough to sew it.  I have tacked it by hand for now but would like to effect a permanent repair by machine and the 29 is the only machine I have that might do the job. It has a narrow free arm and the feeding foot rotates to feed the fabric in any direction. 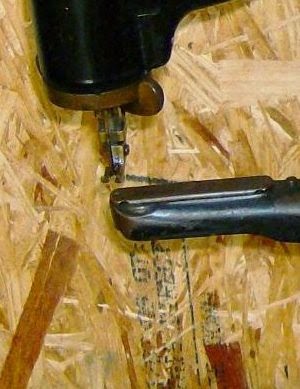