I was cruising the Goodwill auction site today and ran across "8 Pounds of Sewing Machine Accessories".  No one had yet bid and the starting price was $5.00 so I clicked on it to see what was there. 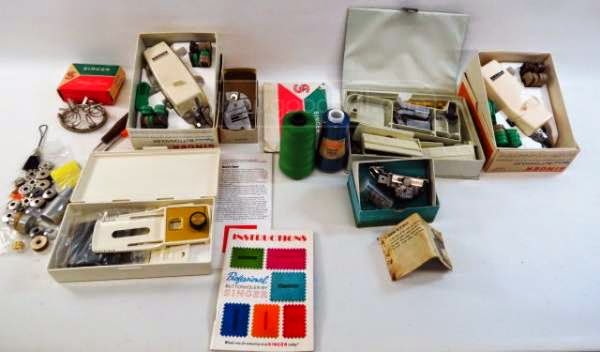 I recognize most of the items but two have me stumped.  Can anyone tell me what this is? 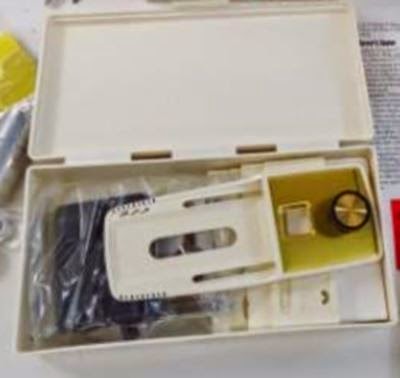 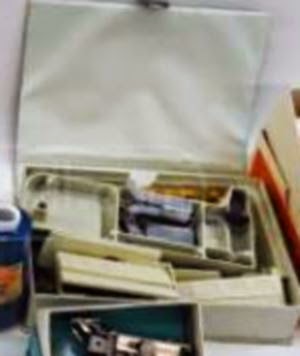 The description says that they are mostly Singer and Kenmore accessories and I don't recognize these two items as Singer, so they are possibly Kenmore.  The white plastic composition tells me they are not really old, maybe from the 70's +/-.

It's just to satisfy my curiosity because while the $5.00 price was good, the $20+ shipping drove them out of my price range.  Maybe someone on the West Coast can use them.

We went to the weekly auction last night.  I was drawn in by the photo of an electric Willcox & Gibbs machine that appeared to be in good condition.  I keep saying I have too many straight stitchers and I am trying to downsize but, here I go, chasing one more sewing machine.  When we got there, the machine was in as good condition as the auction website indicated. 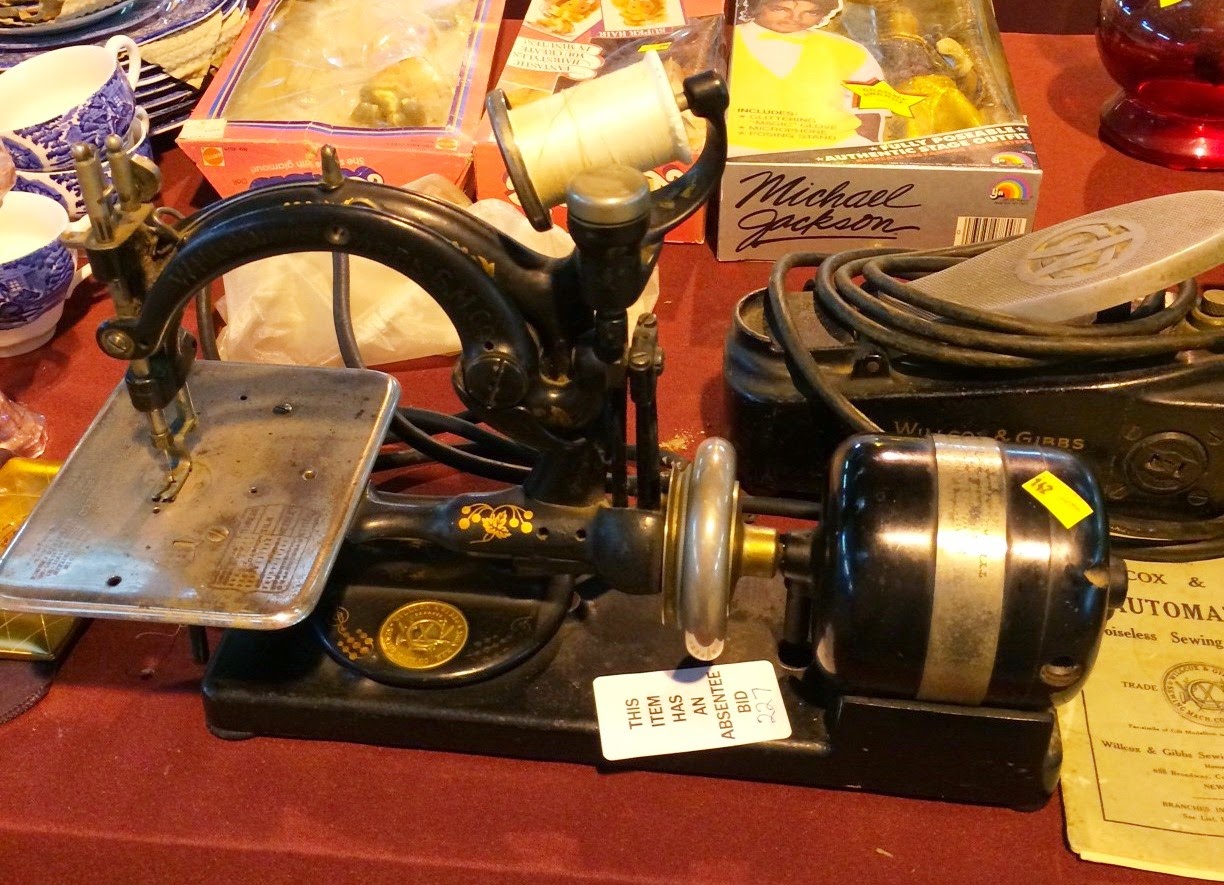 Decals were almost 100% and the lot included the foot control, manual, and box of accessories.  I had a maximum bid in mind but that lowered when I looked into the vent holes in the end of the motor.  There was lots of carbon or dirt and I could see some bare widings that should have been covered with electrical tape.  I was afraid the motor was toast and there was no way to plug it in to test it.  My mental bid limit didn't factor into the decision because bidding ended at $100 and that was way over my maximum.

There were two more sewing machines, a Singer Spartan (not the 3/4 size black one - the newer green one). It sold for $5 with no accessories or manual or any other go-withs, just the machine.  This is not a photo of the actual machine, just a file photo to remind you what it looked like. 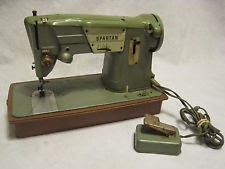 Then there was a Singer 66 in a treadle cabinet. The cabinet was worn and the sewing head had rust and decades of dirt on it but it still brought $55.  Maybe the buyer wants to use the treadle base to make an end table.  I wish I had taken a picture of that one because the decals were some I had never seen before and I can't find any like it on the internet. They weren't Redeye or Lotus, the two I am familiar with.  I thought maybe they were 127 decals that had been applied at a rebuild but that's not what they were, either.  The auction website has changed so I can't download photos of items up for bid and now that machine is gone so I can't research further.
Posted by Unknown at 9:58 AM 6 comments:

Today I dug out a Singer 403 that I haven't used in a long time (maybe never). 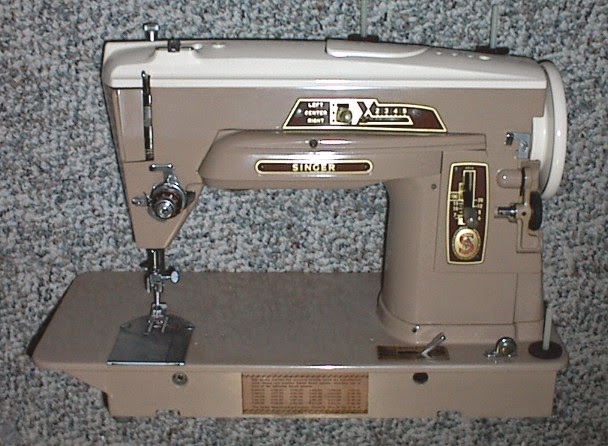 I'm not sure I ever serviced this machine when I got it because there's some tape residue on the vertical pillar that I would've cleaned off if I had ever cleaned and oiled The machine.

As I was sewing on my project, I noticed suddenly I was getting loops on the underside of the fabric. It had me stumped for a minute until I saw that my upper tension dial was at zero. The tension knob was so loose that just the slightest bump moved it from its desired setting.

As I was getting ready to correct that situation, it occurred to me that maybe some others would like to know how that's done so I got the camera out and took some pictures of the process.

Here is a clip from the service manual telling how to disassemble the 401/403 tension assembly.  To merely tighten the knob, you only need to perform these two steps. 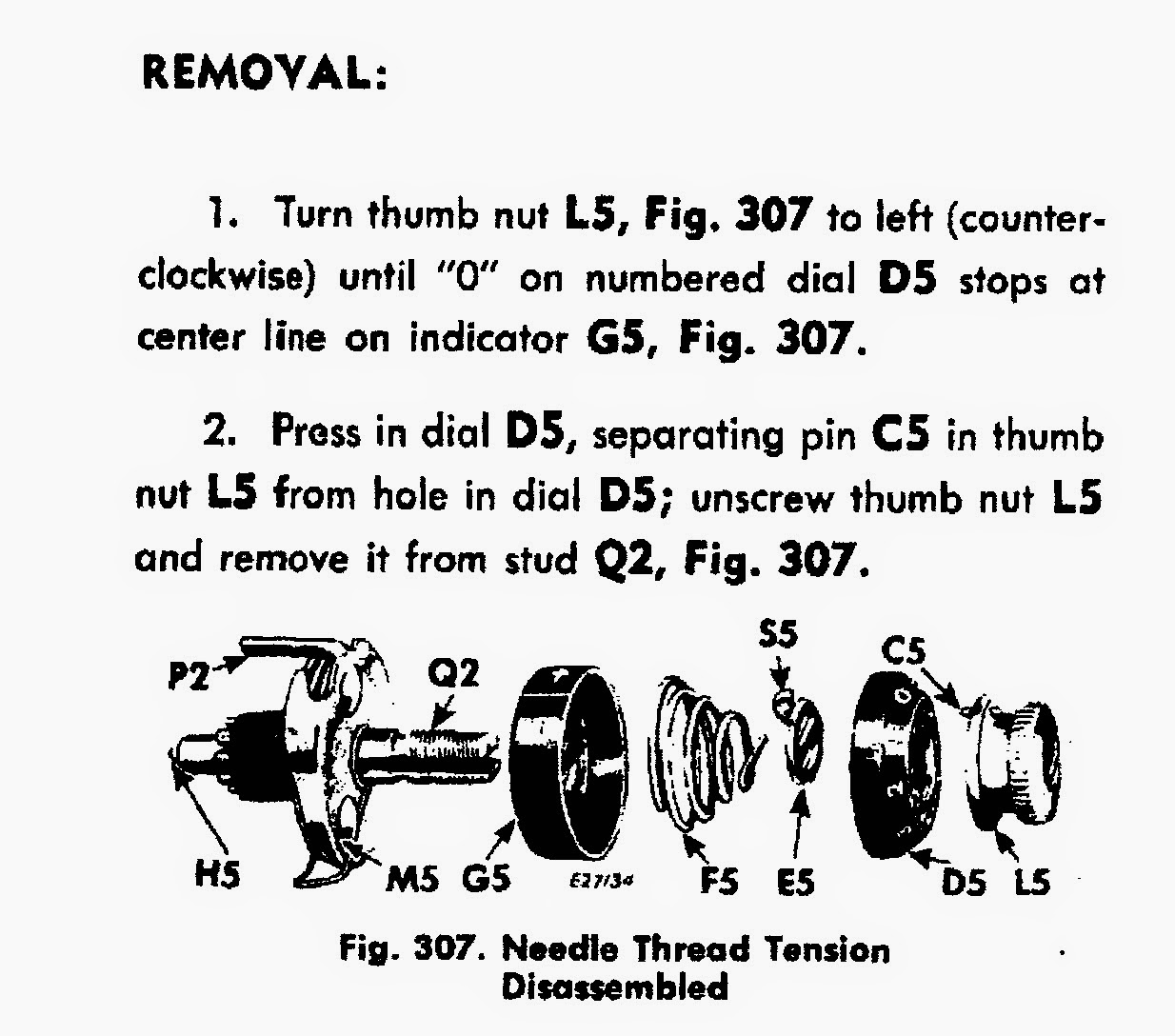 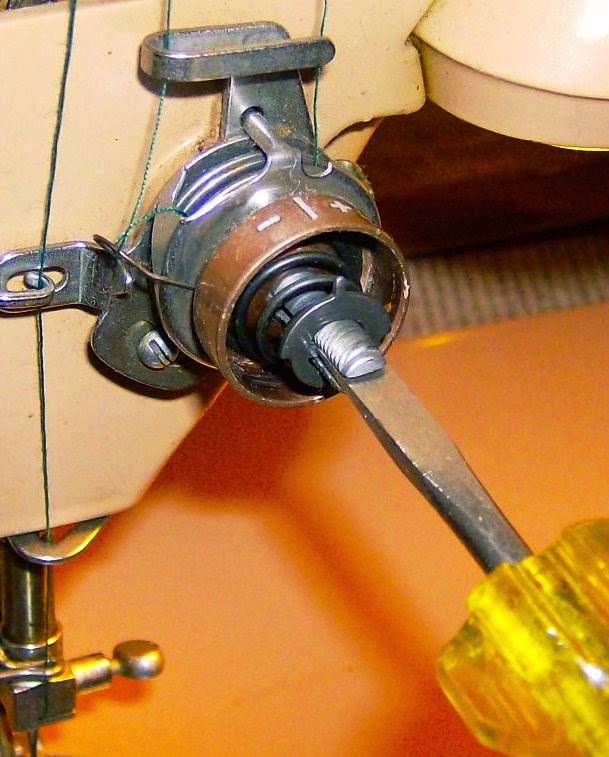 If you get the stud halves spread too far apart and the thumb nut L5 will not go back on, squeeze the stud halves back together a bit with pliers and try again until you get it where you want it.

I had previously noticed that the +|- indicator was skewed off to one side so while I had the tension assembly open, I thought I would fix that also. 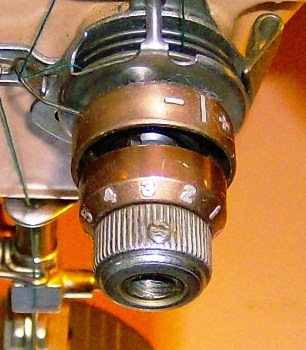 There is a set screw inside the nose door that holds the entire upper tension assembly in the machine. Loosen that set screw and you can turn the assembly to any position you desire. When you have it where you want it, tighten that setscrew and you're ready to reassemble. 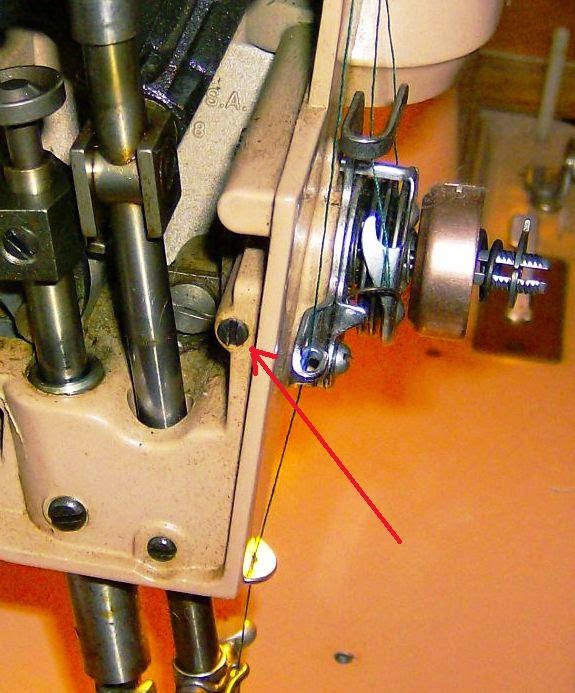 Assembly is the reverse of disassembly.

After the tension assembly is reassembled, you want to adjust the tension so that you have a good balanced stitch with no regard to the numbered dial.

Once you have a good stitch, push in the numbered disc D5 and rotate so that the number 4 appears at the top of the dial at the +|- indicator. Release the numbered disc and make sure the pin C5 is seated in one of the holes in D5 and you're done. 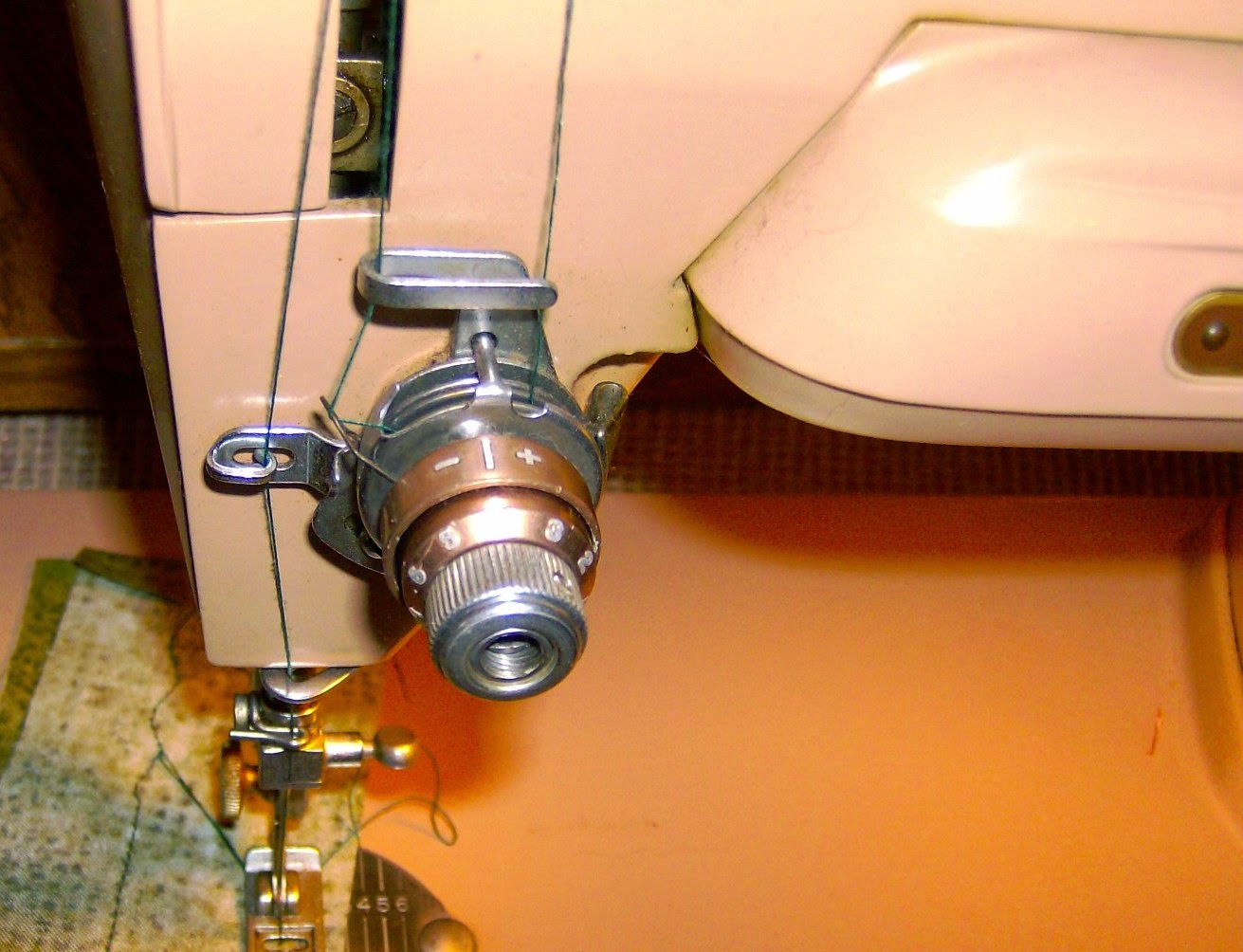 I got a chance to test drive the high shank snap-on feet this afternoon.  I was pleasantly surprised, Everything fit and worked well.  I used a Necchi Lelia 513 as my test bed because it was the easiest high shank machine to reach.  The installation was simple, I just removed the current foot and screwed on the High Shank Adapter. 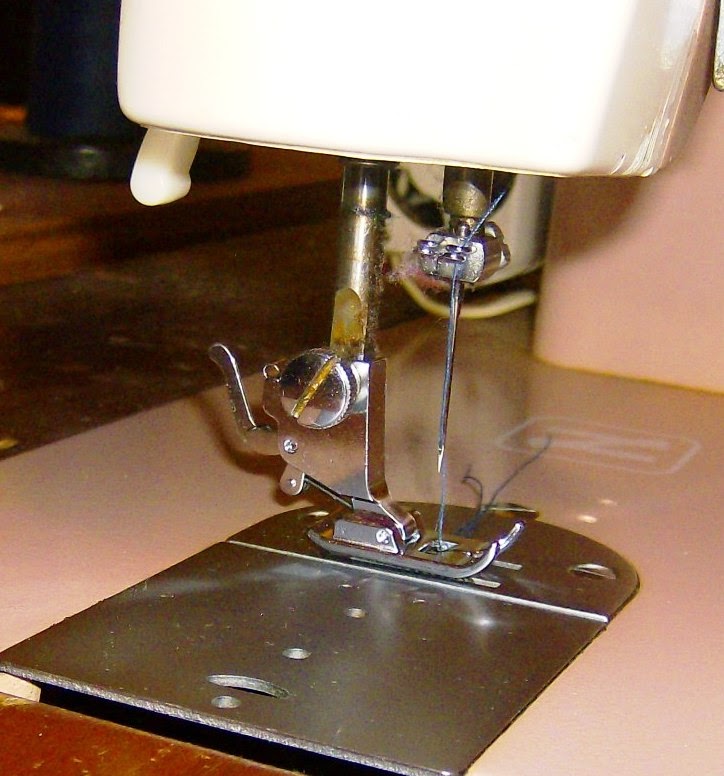 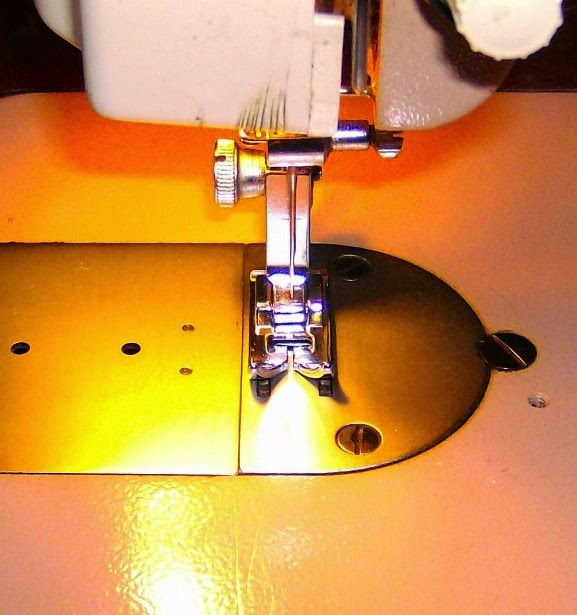 and the fork on the foot matched the teeth of the feed dog.  So far, so good. 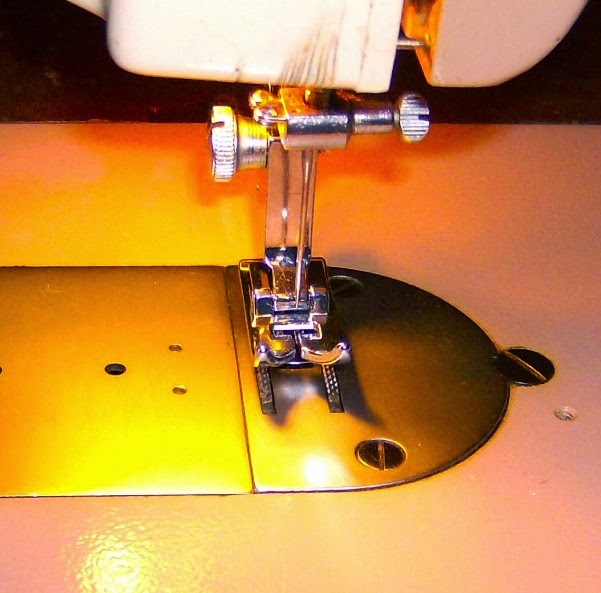 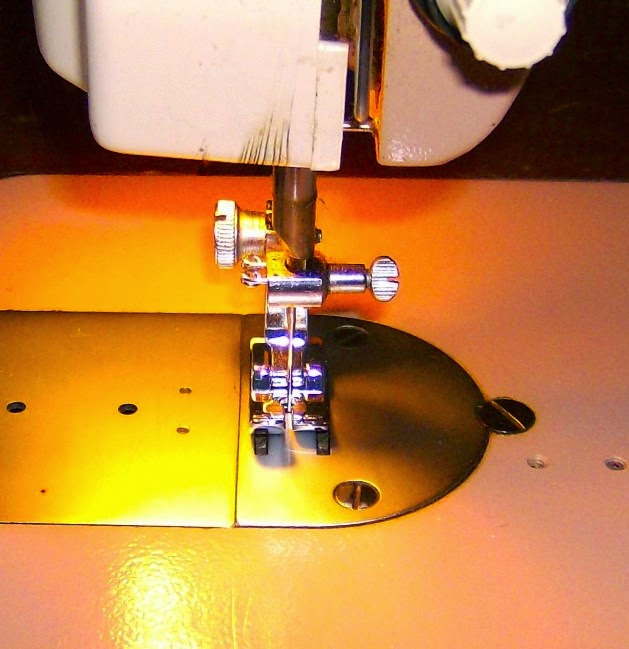 Then, I attached the zipper foot.  I prefer the old, adjustable zipper feet because I can adjust the position of the foot in relation to the needle but this is the style of zipper foot that comes with new machines, now, so I guess I'll have to adapt. 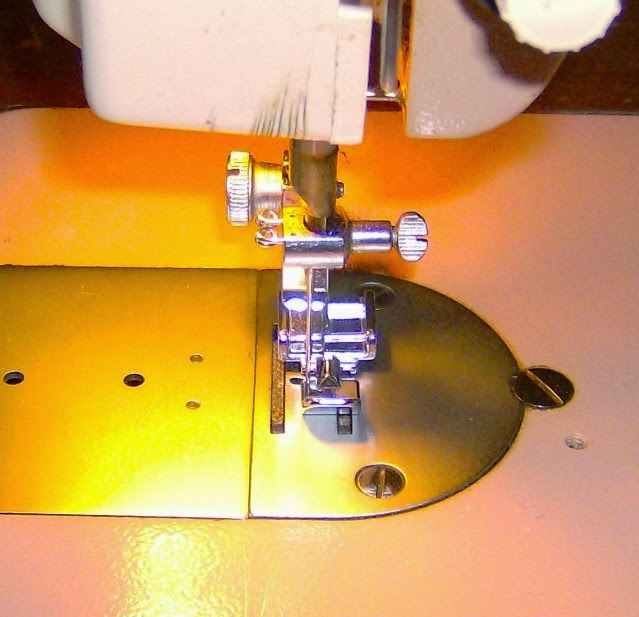 The item I sewed with the zipper foot was welt to go on a small chair I am recovering.  The shape of the zipper foot did not allow me to sew close enough to the cord to make a smooth welt but moving the needle to the left position did. 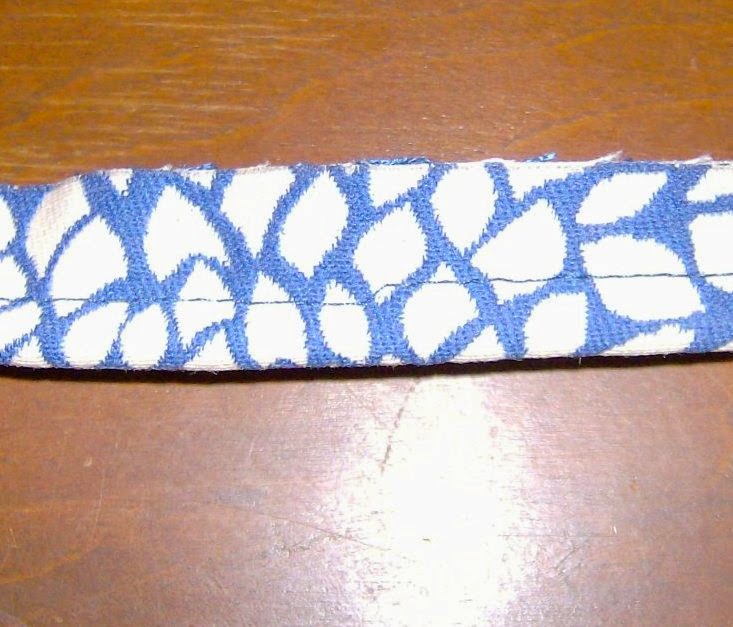 Hopefully, it would perform better on a zipper.

I didn't try the remaining feet because I figure I would never use them, anyway but I expect they would perform just a well as the feet I did try.

I will place a few of these sets on my next parts order to see if other folks like them as much as I do.  It sure makes changing presser feet much more pleasurable.

On my second trip to a new thrift shop in town, I spotted a modern-looking cabinet. 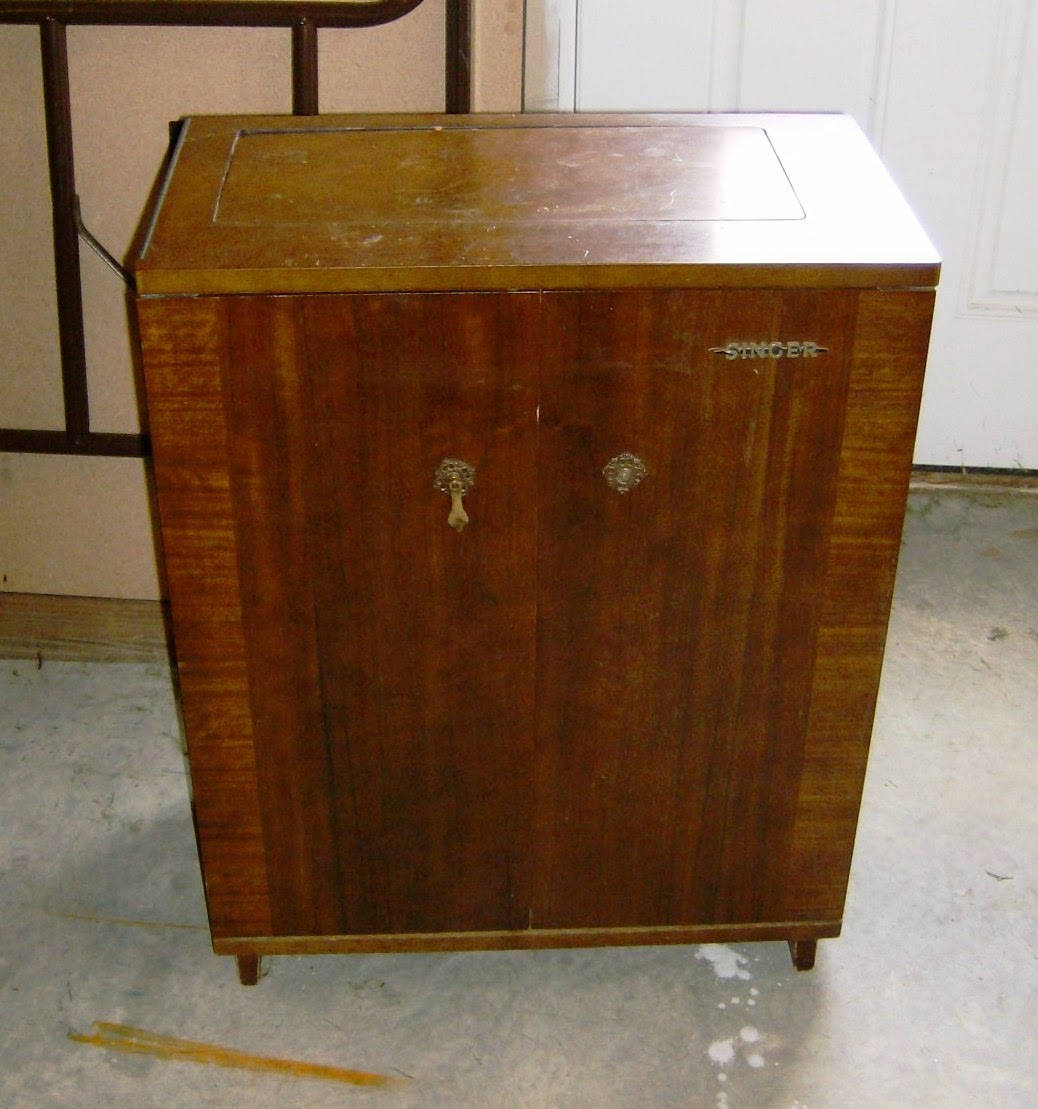 The cut-out in the top told me it was a sewing machine cabinet and it was so modern, I wouldn't have given it a second look, except for the SINGER nameplate on the door. 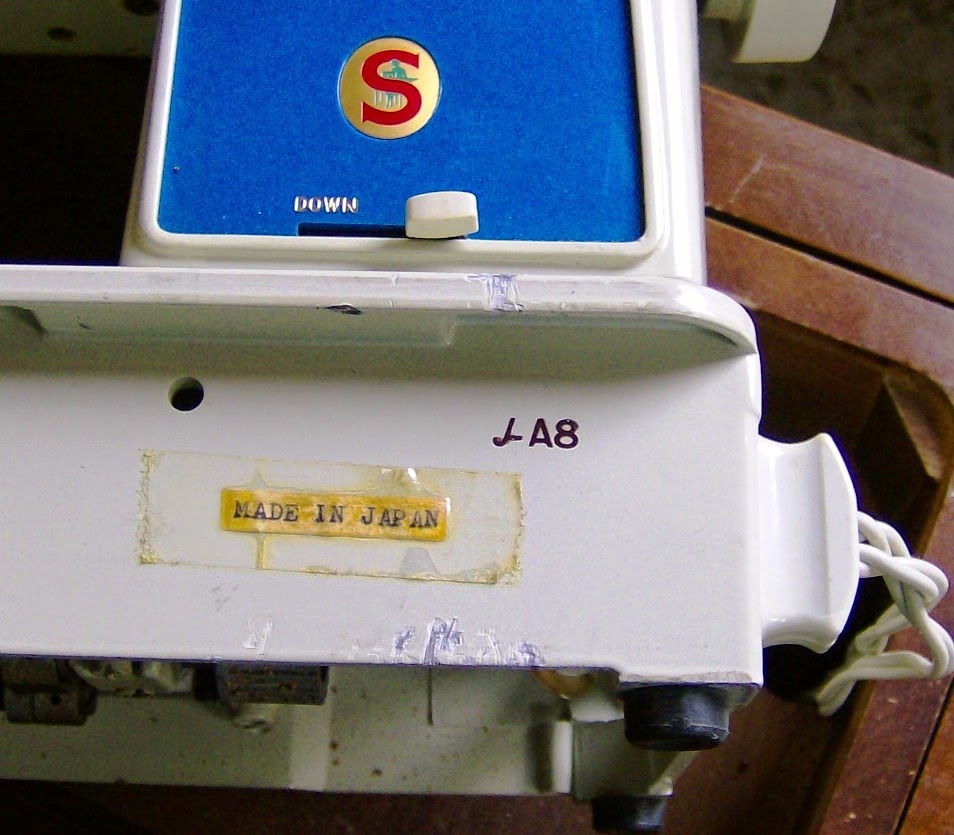 The cosmetic condition is exquisite although I am not too crazy about the gaudy blue plastic faceplate. 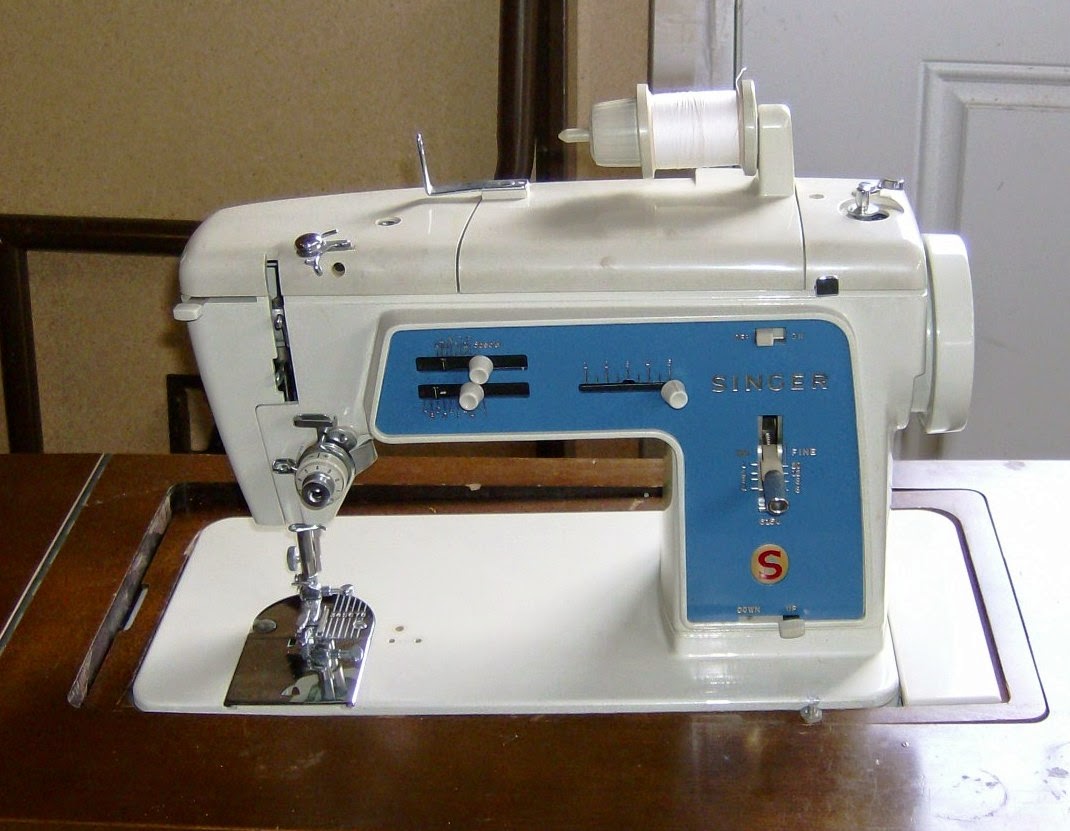 It had the instruction manual and a unique attachment box. Most of the attachments are still in their original plastic envelopes. 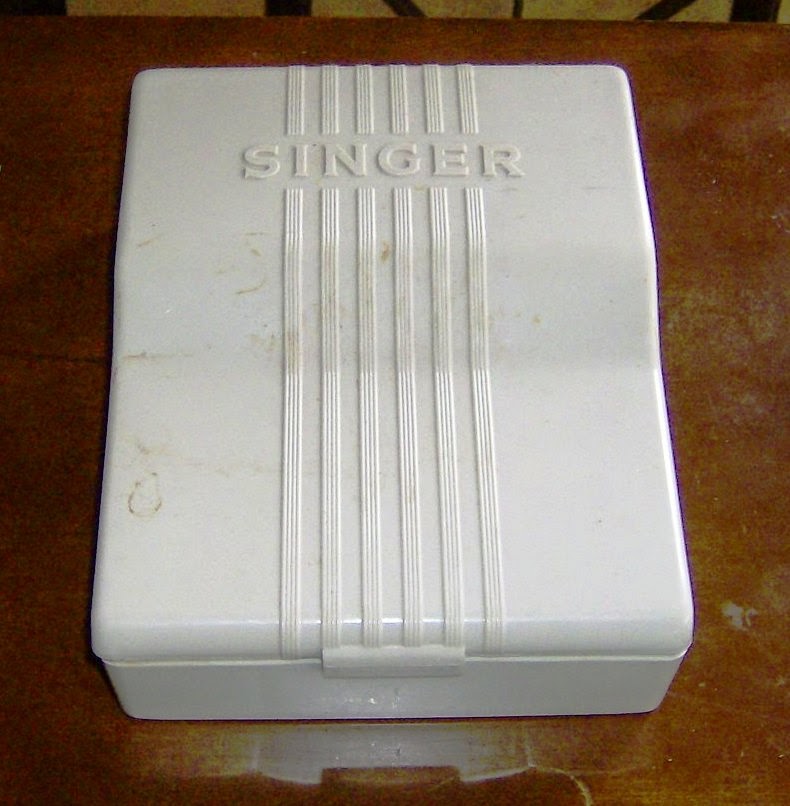 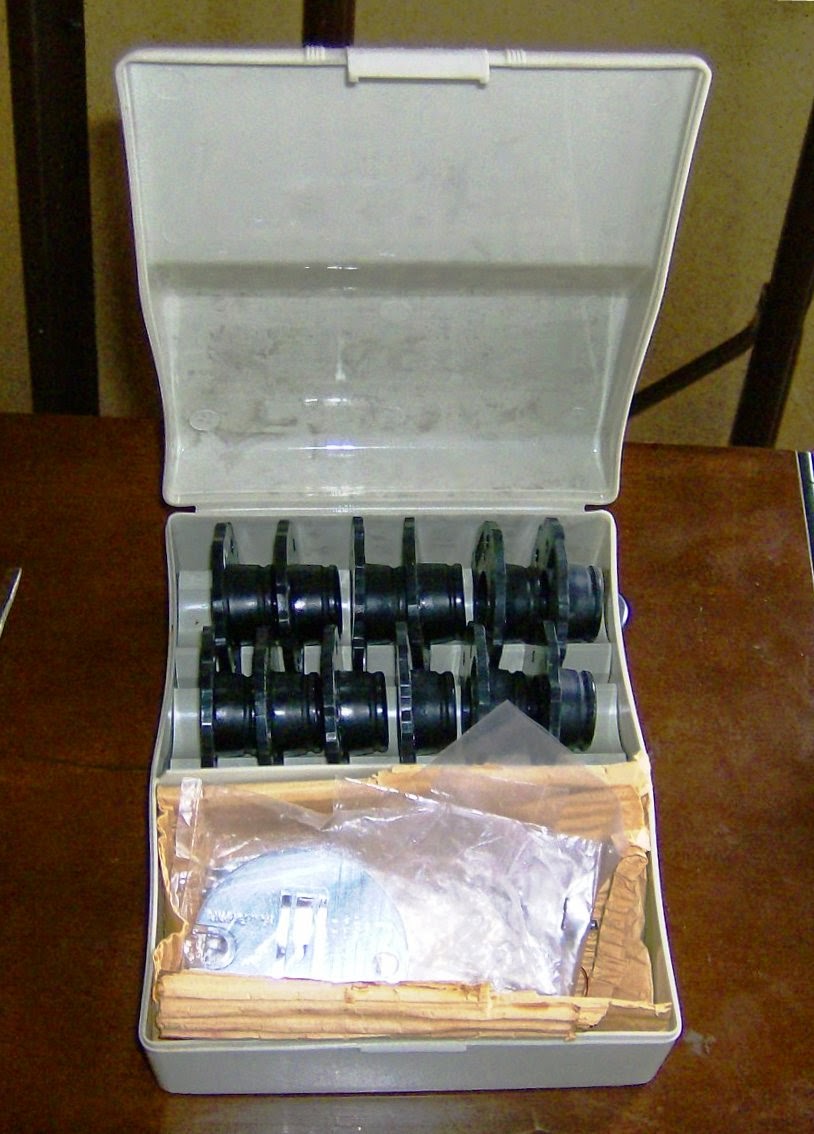 The store owner plugged it in and ran the motor and that's when I noticed that the hook was not rotating.  Anxious to demonstrate my extensive knowledge, I told him it had a broken gear.  Imagine my embarrassment when we opened up the bottom plate and found that this model does not use gears to transmit rotation from the upper section to the lower, it uses a cogged timing belt.  Here is what remains of the belt.

I didn't make any decision that day, I came home and checked the internet to see if a replacement belt is available and it is, so I put one in my cart.  Yesterday, I stopped by to see if anyone had taken the machine for parts and it was still there.  The owner said he would take $15 but I was with Kathie, so I couldn't take it then.  This morning, Kathie was at a sew-in so I went to the store and picked it up.

Except for the belt and the camstack, it is all metal inside.  Everything is clean and rust-free, even though the dropping feed dog and one of the cam selectors are frozen, common ailments on old sewing machines. 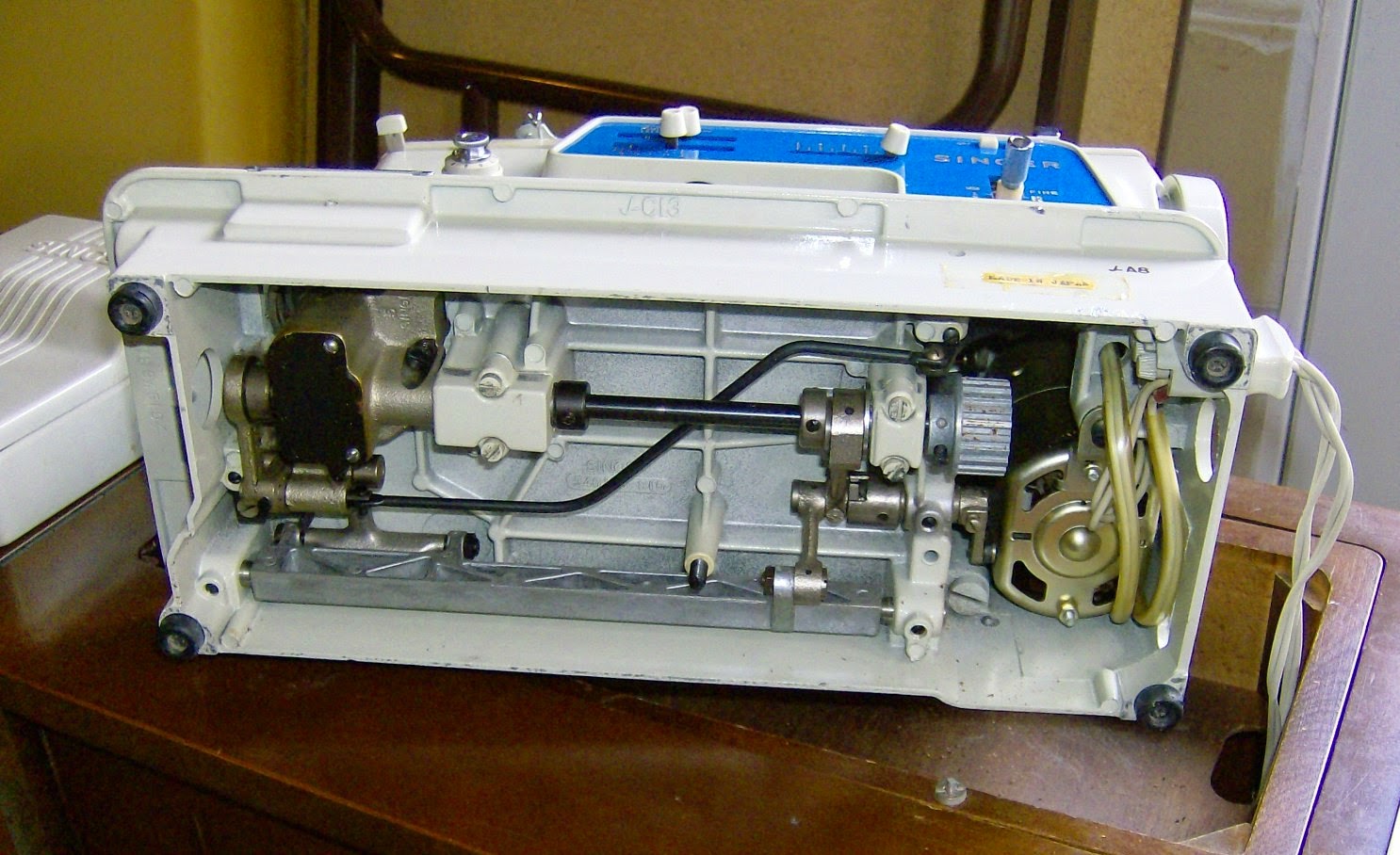 The machine is in such nice condition that I would like to get it running but the idea of replacing that timing belt has me nervous.  I have yet to find instructions anywhere in my service manuals or on the internet.  The lower pulley is easy, it is at the end of its shaft 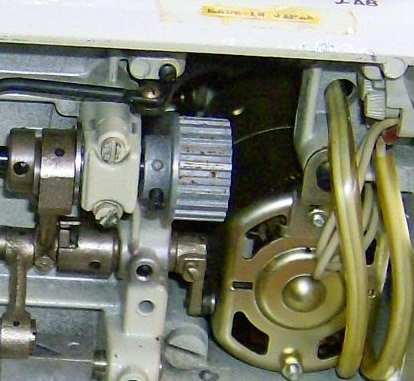 but to get the belt over the upper pulley, the belt has to go over the main shaft.  It would be nice to know if I can remove the rear bushing and slide it in that way or if everything on the main shaft has to be removed or loosened so the shaft can be slid out far enough to insert the belt from the top.  If anyone can provide guidance, please do.

The jury is still out deliberating whether to invest in a belt and try to replace it or just carve the machine up for parts
Posted by Unknown at 11:30 AM 4 comments: