I had someone ask me today for instructions for the Singer Circular Stitcher. 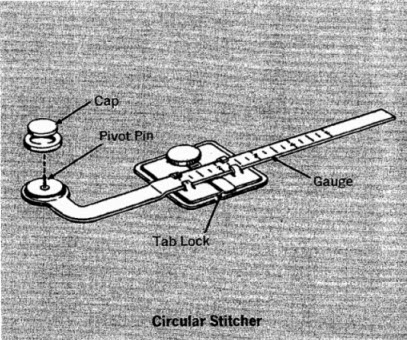 I thought it would be an easy task but spent hours scouring the many books in my personal library and then the internet only to come up dry.  It seems that many people have obtained a Circular Stitcher without instructions.  I did learn that the instructions are contained in the Singer 636 Instruction Manual so I downloaded the whole 66 mb manual from the Singer website to get the one page Circular Stitcher Instructions.  Here they are: 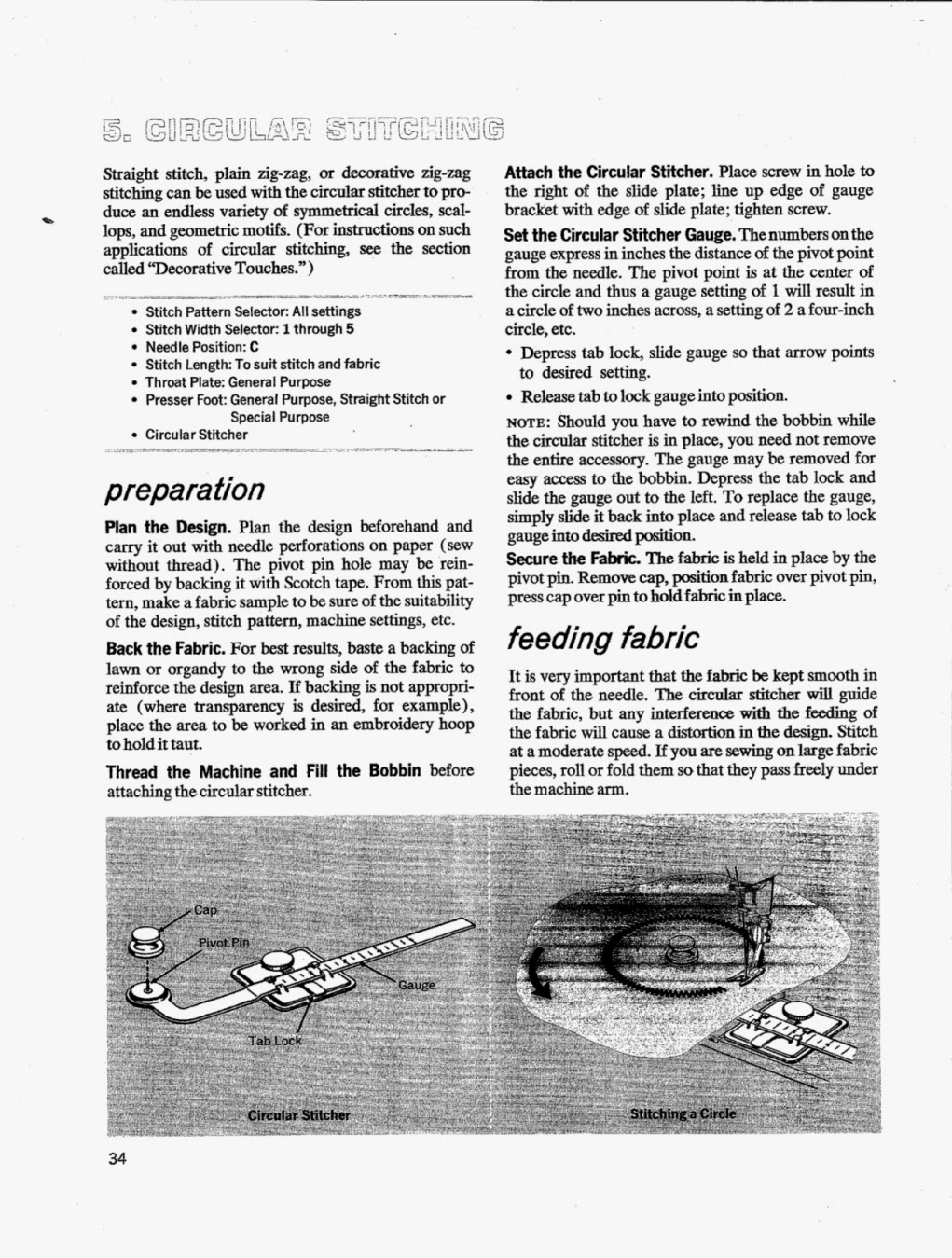 When we opened the quilt shop, I loaded up on Ebay Featherweights, planning to clean them up and sell them in the shop.  You know the rest of the story - the shop is closed and now I have more Featherweights than I want to store!

This week, I decided to start getting them ready to sell online.  Last night, I finished the first one and listed it on Etsy.  It wasn't easy on the wallet, it was missing the bobbin case, feed dog, foot control and light bulb; the bed cushions were all mashed down; and the needlebar was slightly bent.  After a week's work, it is all assembled, tested, and ready for someone to enjoy. 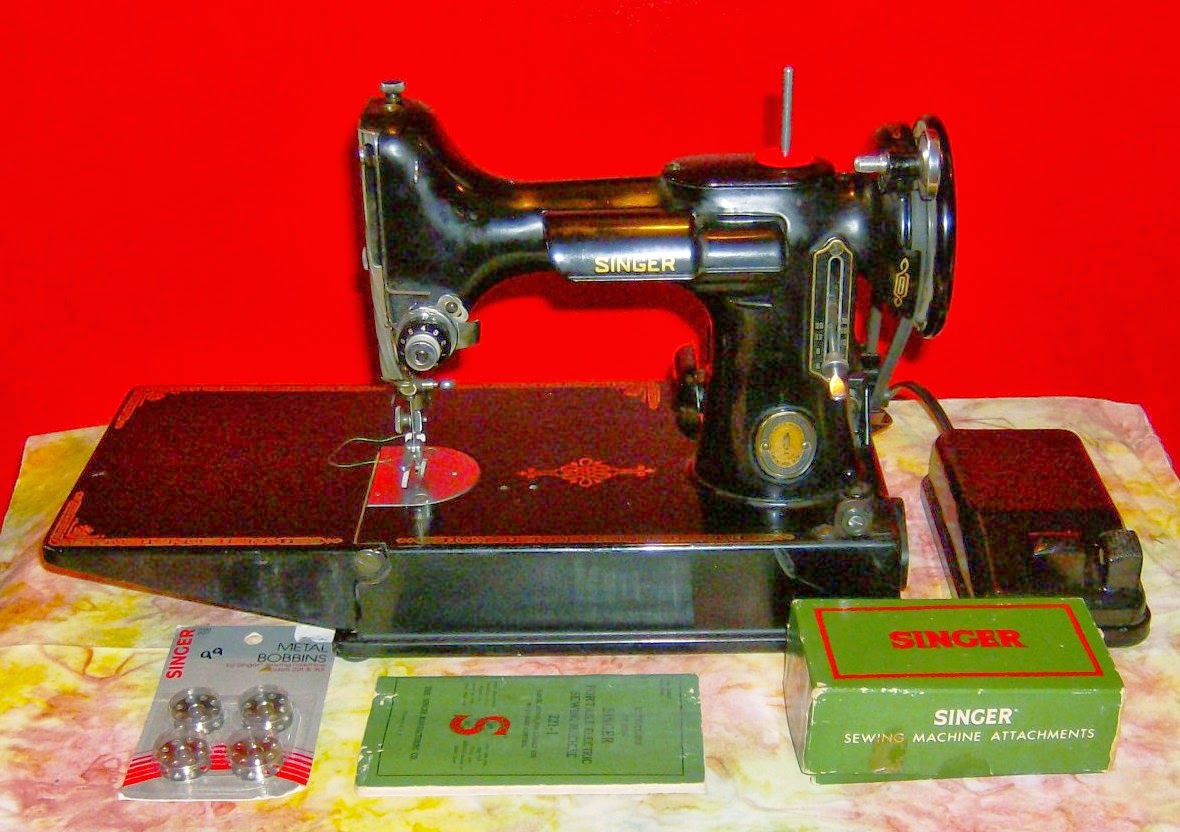 Now, only three more to go!

The other day I lifted my Nora out of the cabinet to install a light bulb and noticed that the power cord was a bit on the worn-out side. 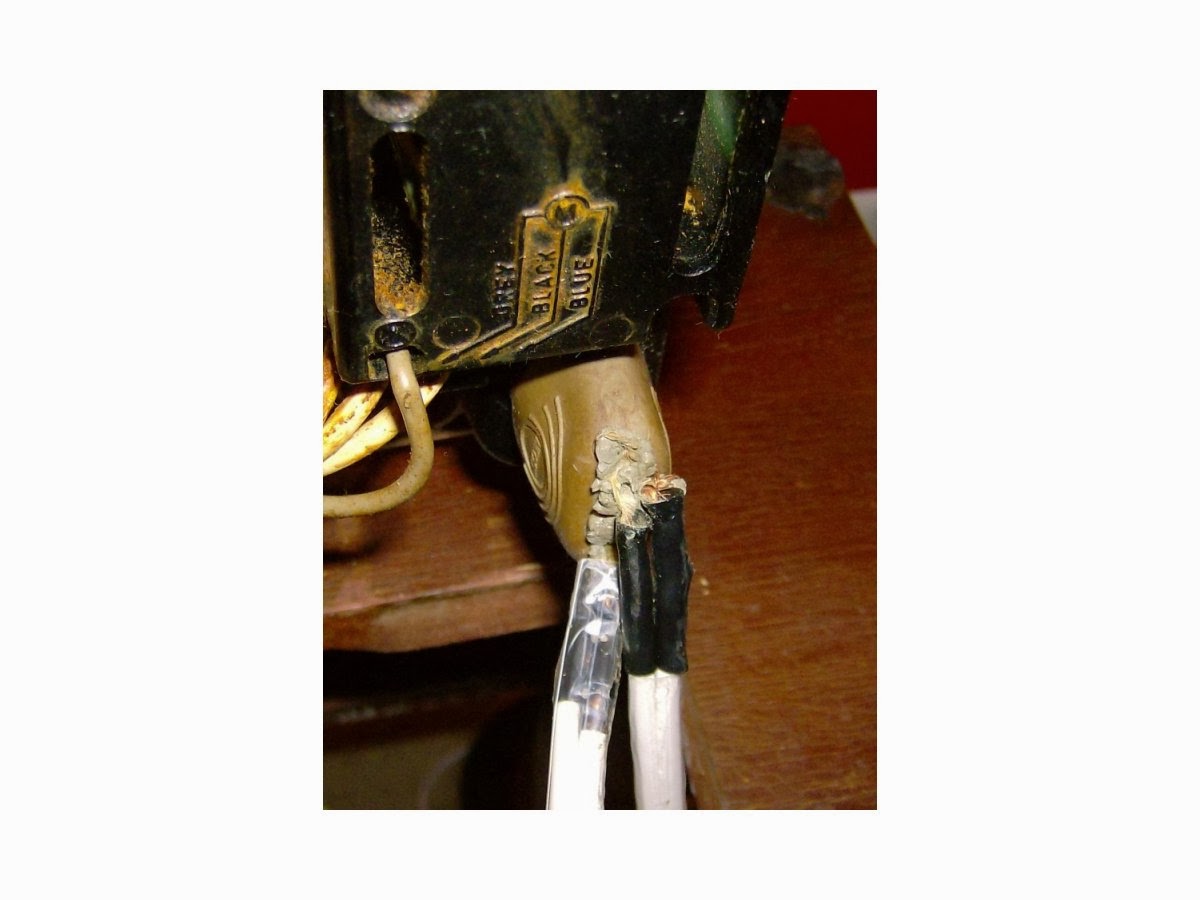 On my next parts order, I put three replacement cords in my cart and they arrived today. If the Nora had a peculiar cord, I probably wouldn't have been able to find a replacement but, fortunately, this is the same cord used by Lelia, Mirella, Esperia, Supernova and probably other Necchis, so replacement was available.

I think most people who read this blog know how to replace a power/foot control cord but some might be hesitant so I thought I would go through it step-by-step for those folks.

First, unplug the power cord so you don't get shocked.  Tip the foot control over and remove the screws from the four corners of the bottom plate. 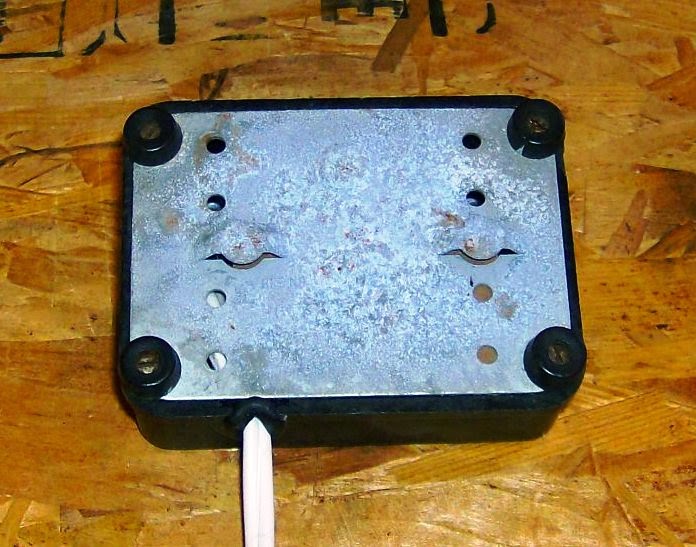 Lift off the bottom plate and insulator below to expose the connection points for the power cord. 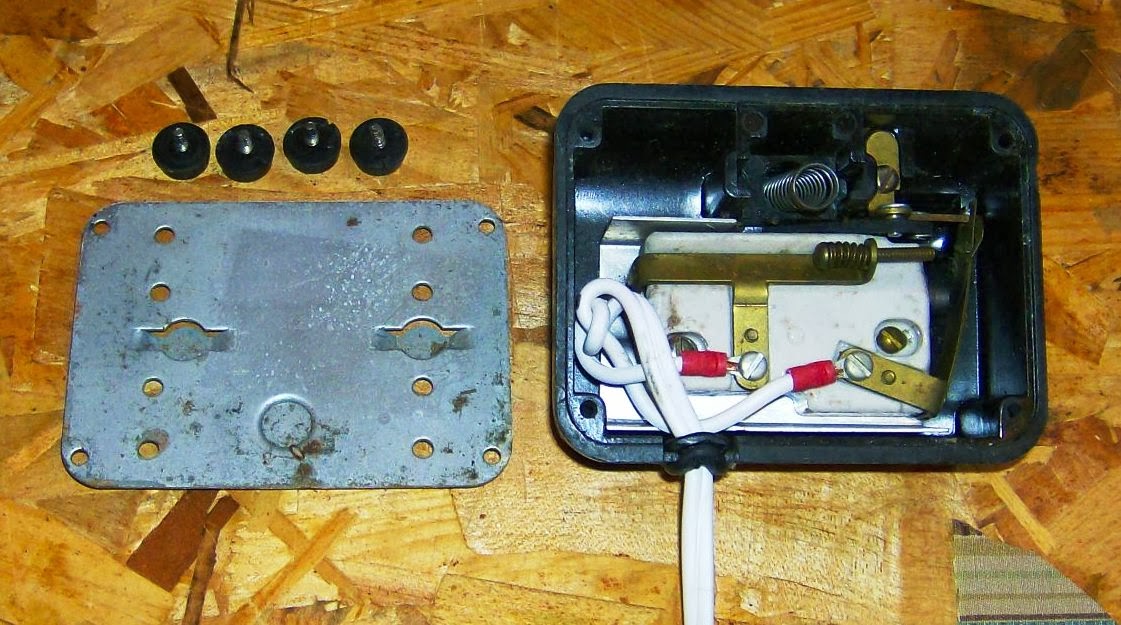 Unscrew the two terminals and remove the connectors.  Remove the grommet from the old cord.  Install the grommet on the new cord before connecting the terminals because you can't do it afterwards. 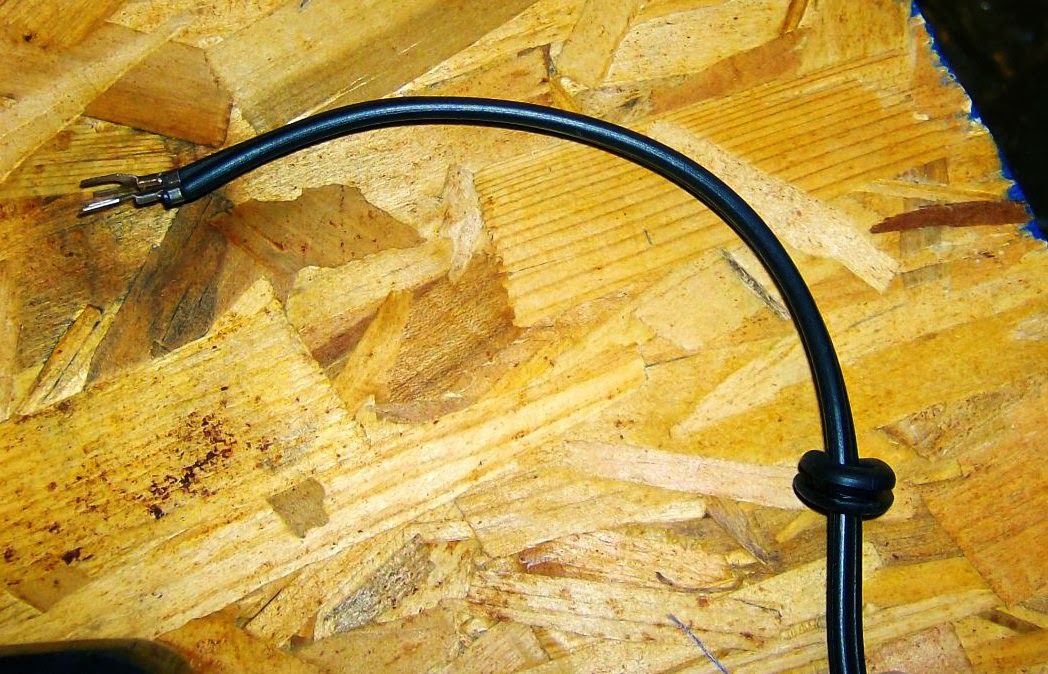 Separate the two wires about 3-4 inches and tie them in a simple knot. This keeps a portion of the cord inside the foot control and relieves any strain on the ceramic guts of the foot control. 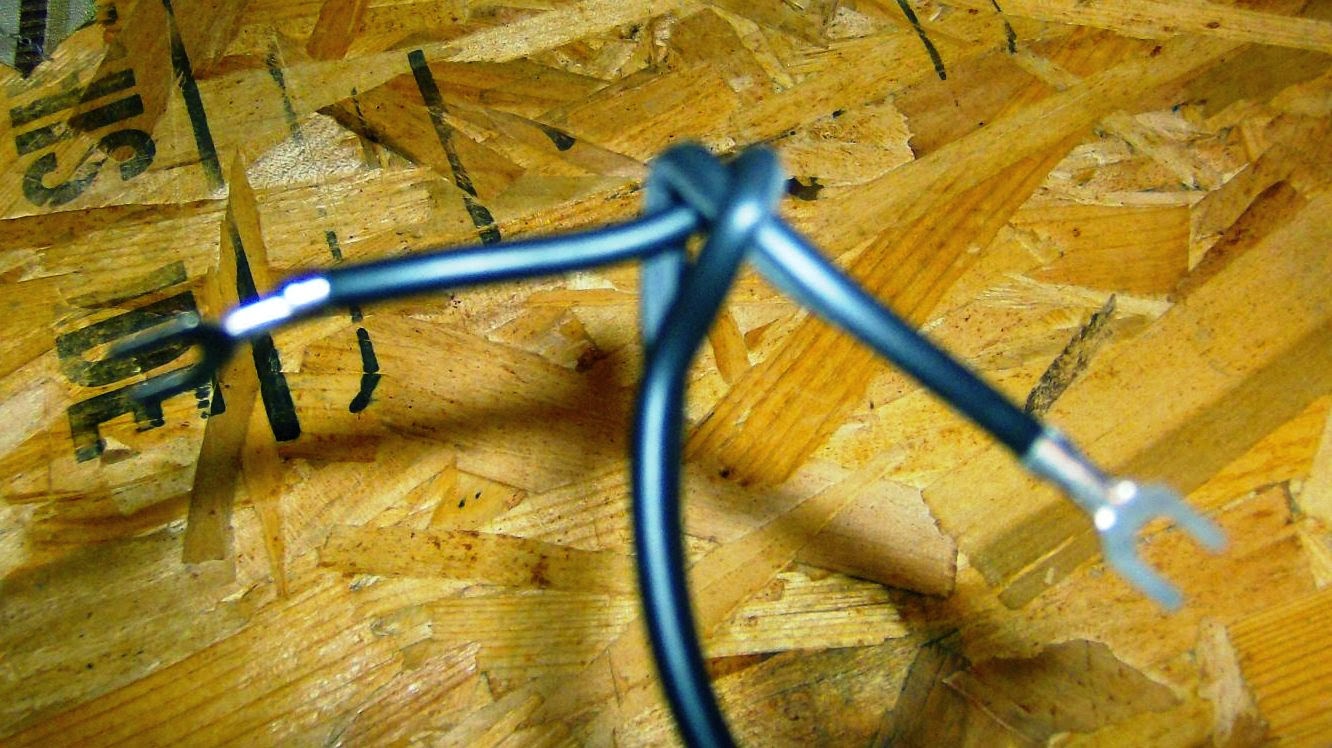 Connect the two wires to the two terminals.  On a two-wire system, it makes no difference which wire goes to each terminal. 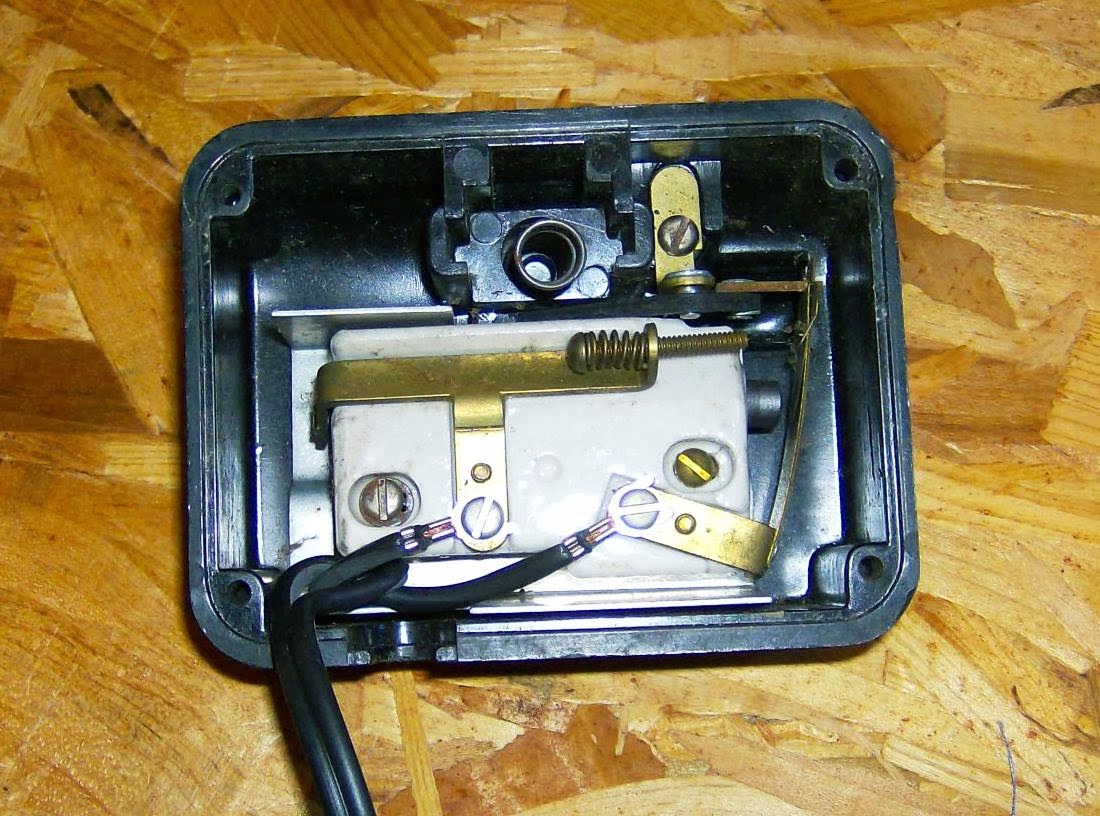 Reinstall the grommet in the slot in the back of the controller, 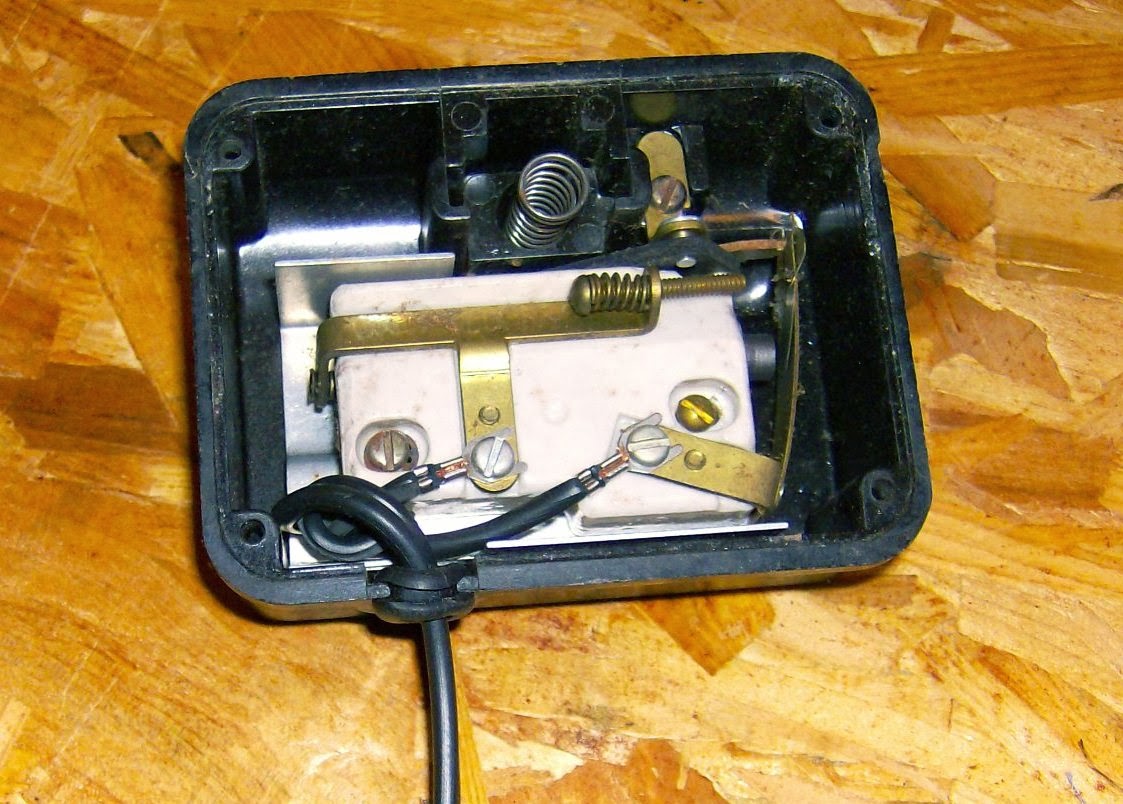 set the insulating blanket on the terminals to keep the energized terminals from contacting the metal controller bottom plate and reinstall the bottom plate. 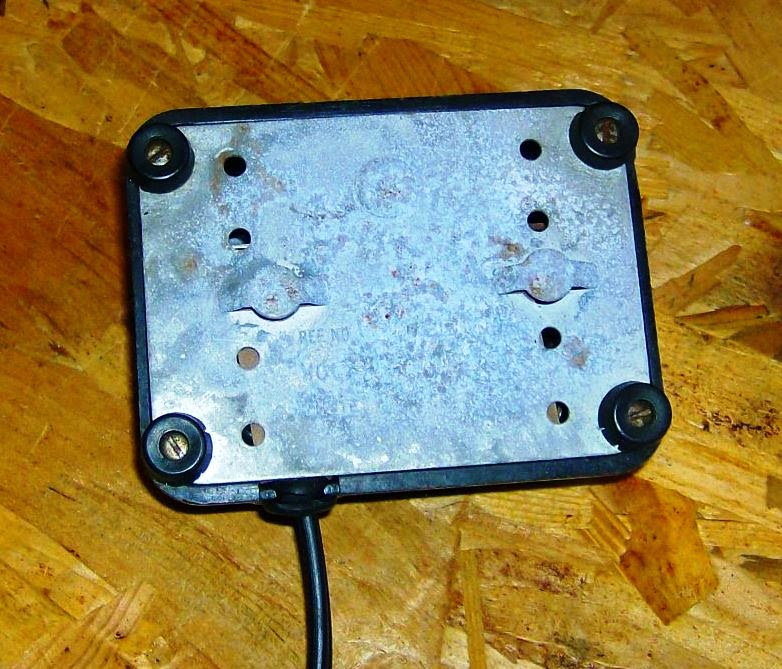 You're now ready to plug it up and take it for a spin! 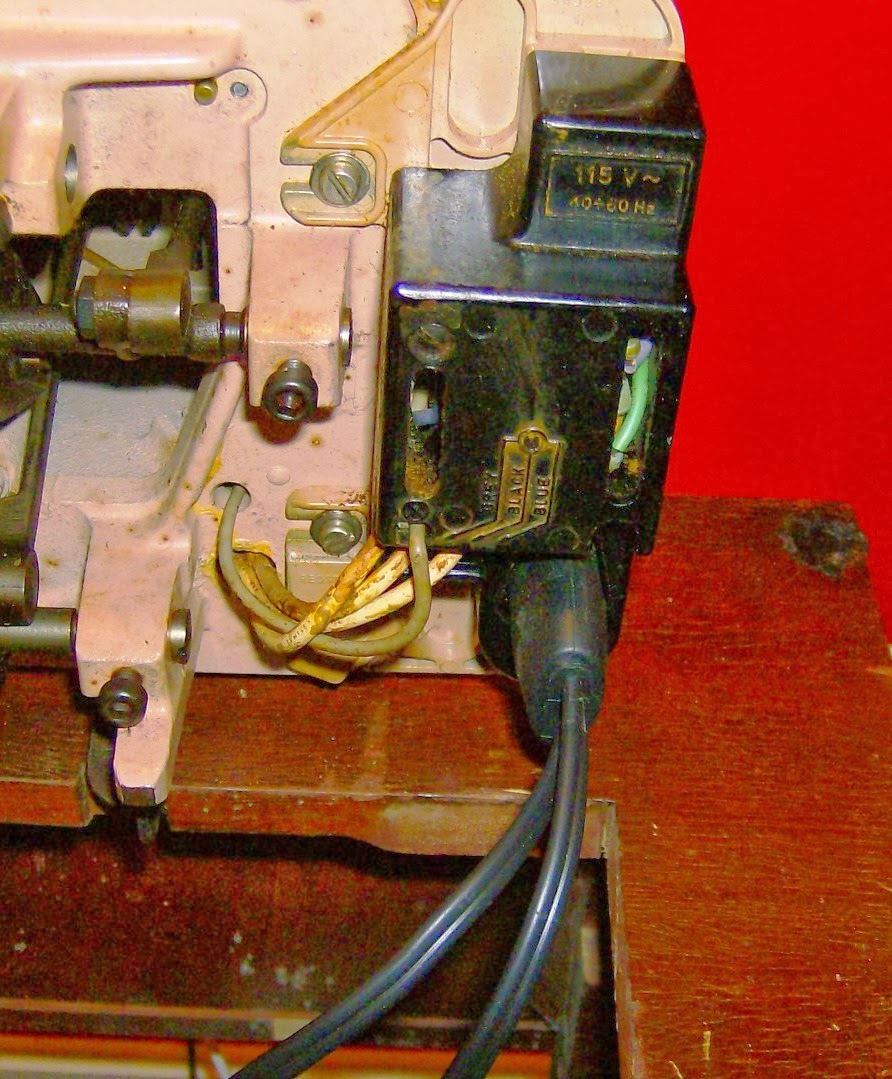 I abandoned the Supermatic for an old standby Singer 401A and finished the project I was working on.  Sewing on the 401A made me think about the 401G on the shelf that hadn't been used in years.  All I remember is that I didn't like it when I got it and put it on the display shelf for someday in the future when I felt like tinkering. 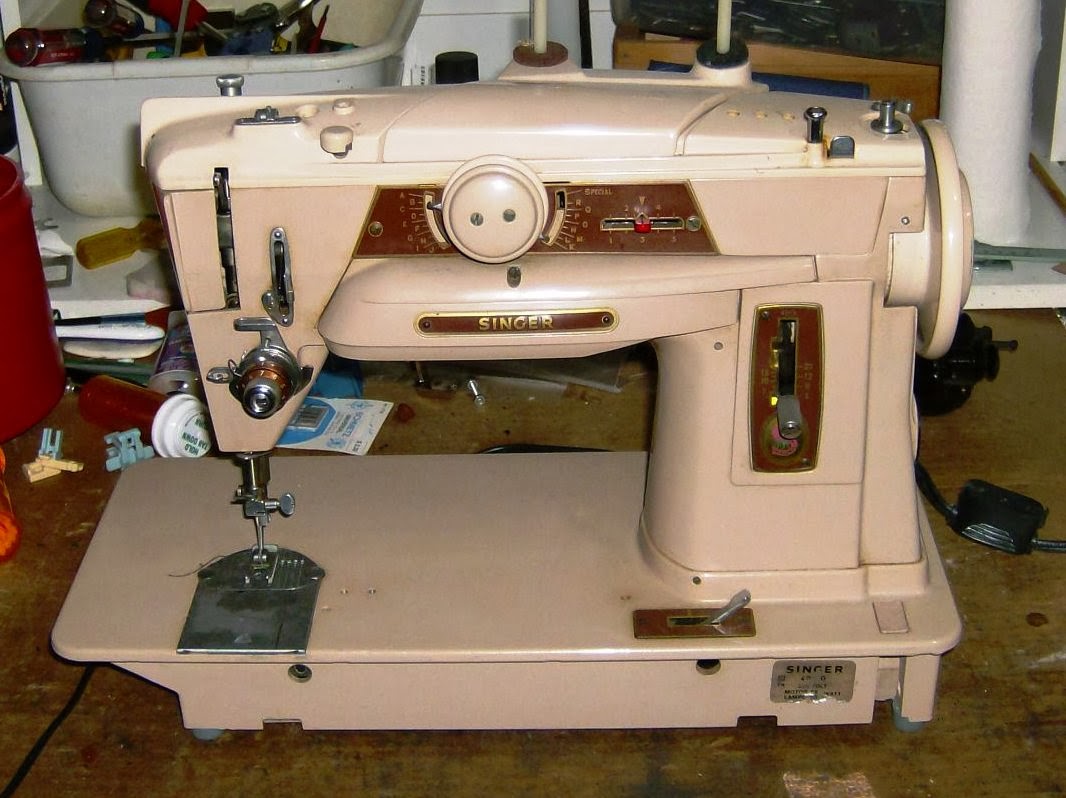 The machine is in excellent cosmetic shape, obviously not used too much in the past. It came with a unique accessory box having two slide-out drawers instead of the 401A box with hinged lid 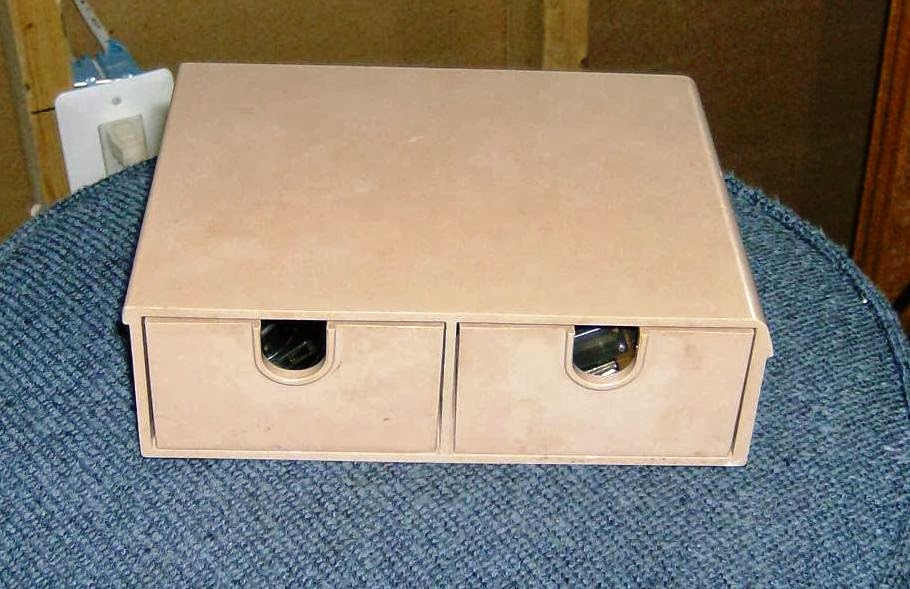 It is kind of a cross between the American 400 series and the American 500 series machines.  It has the general body shape of a 401A with the thread finger of a 500A. 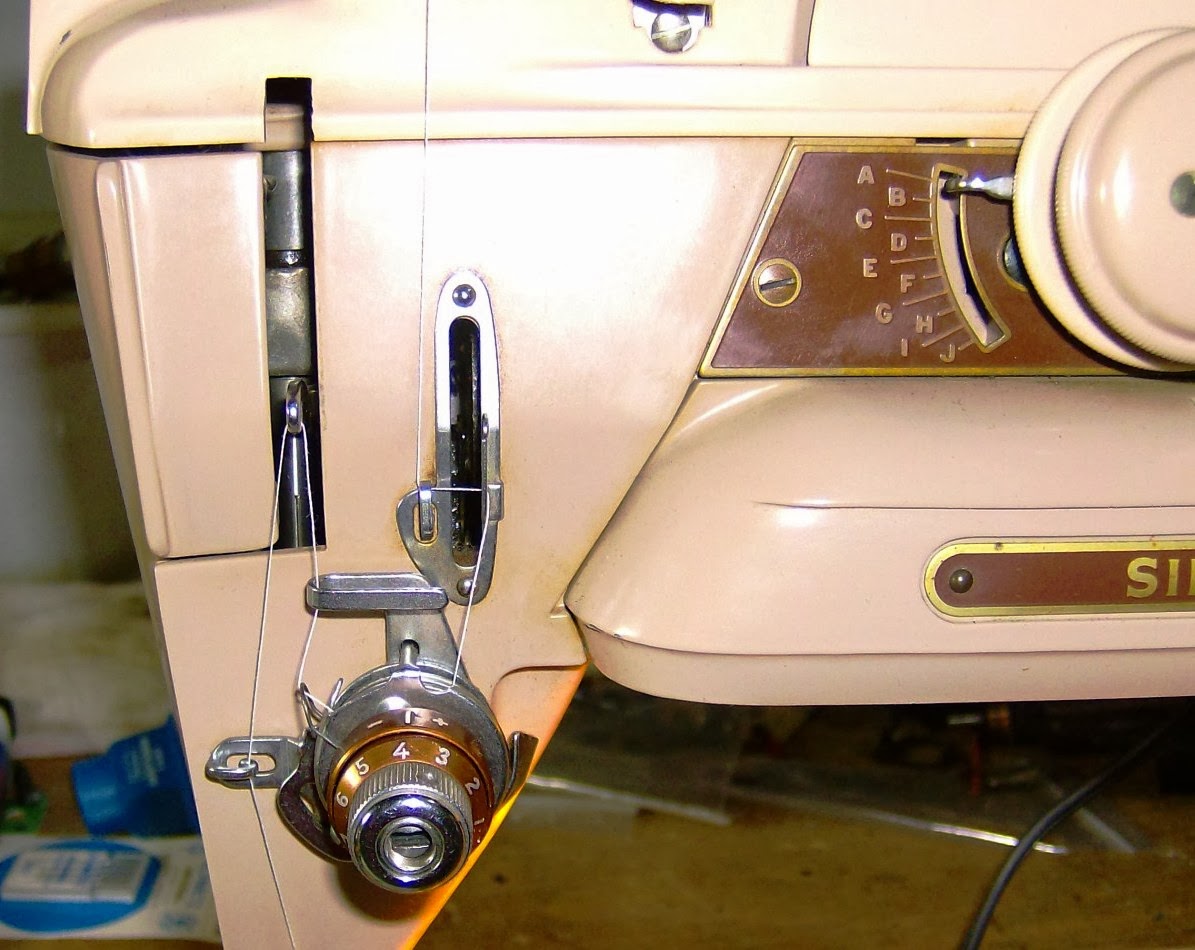 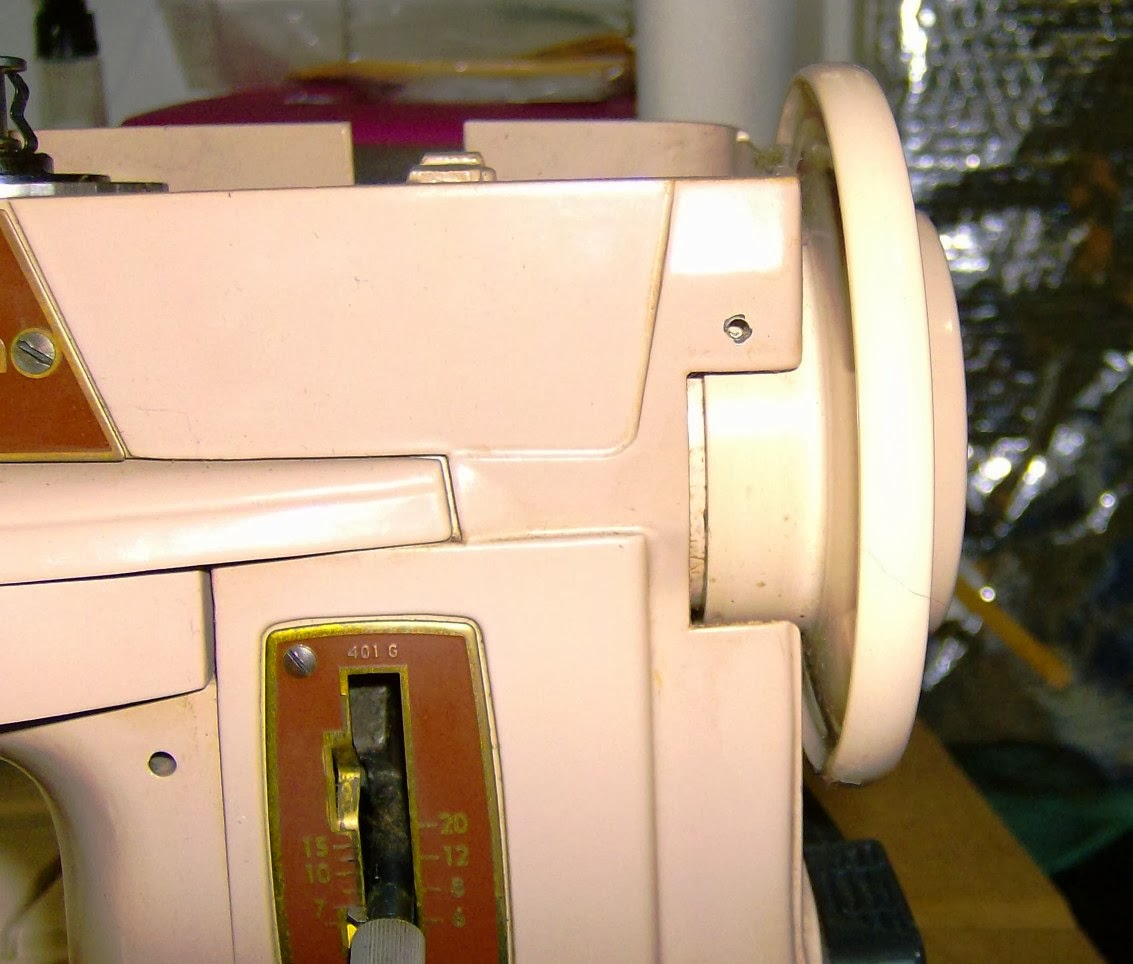 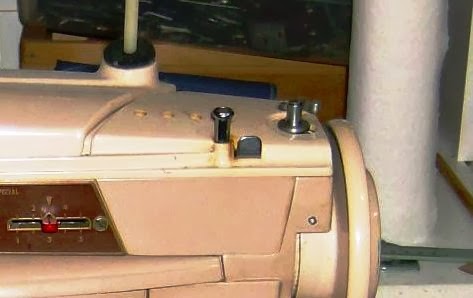 To begin with, the motor would not run.  Turned out the connector on the motor was loose and not making connection.  That gave me the opportunity to pull out the motor and lubricate both ends of the shaft.  Next issue was a loose hook shaft - not much, just enough to make a click when it was jiggled.  Loosening the screw on the collar and sliding it toward the hook about half a millimeter solved that. 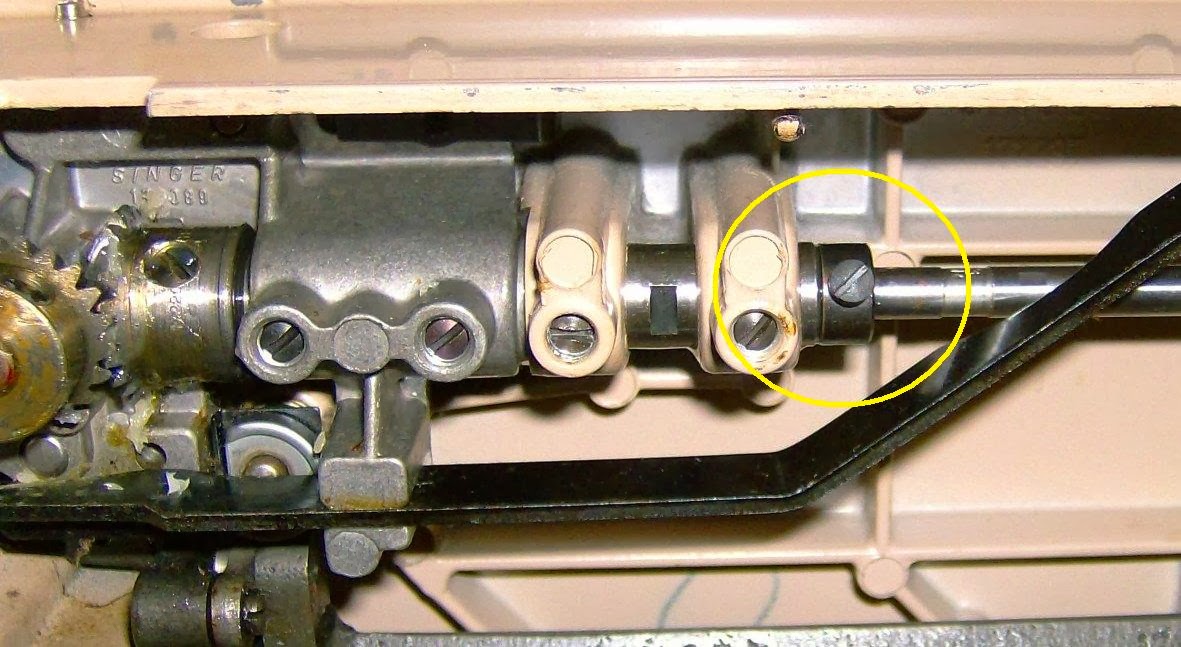 I oiled and greased everything that needs oiling and greasing but the machine is still noisier than other slant-needle machines.  It still has the beige bobbin winder tire so I am going to assume that the machine has so little wear that the gears have not worn together yet and it will quiet down in time. 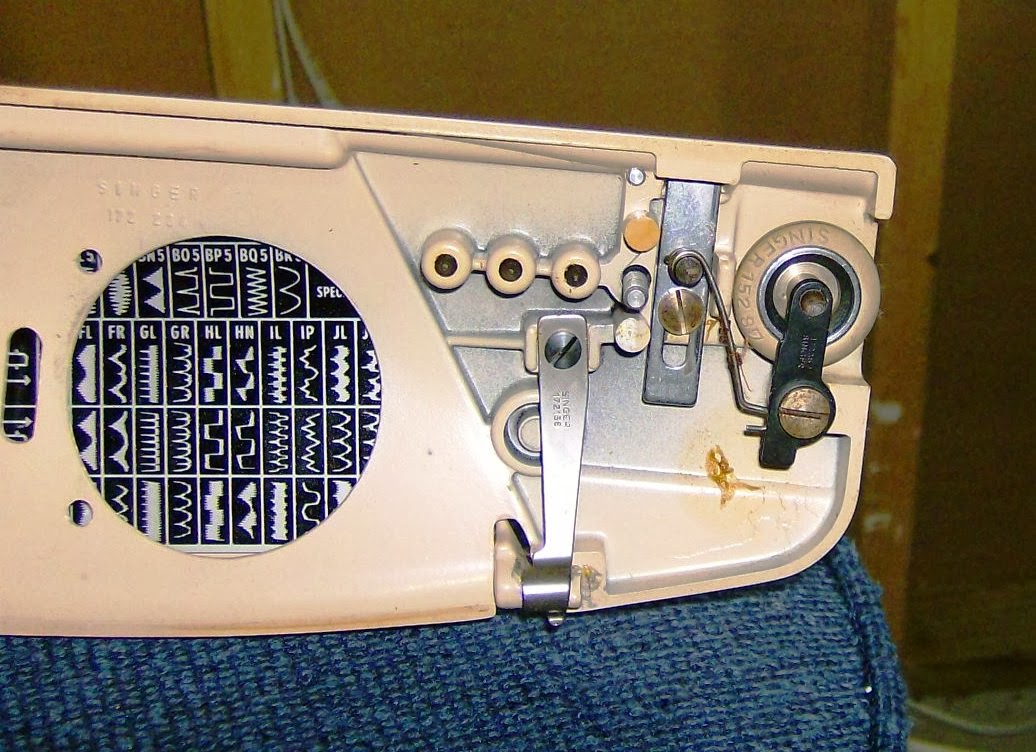 I will use it for a while and see what happens.

After everything was back together, I tried sewing.  The green fabric on the left was the result. 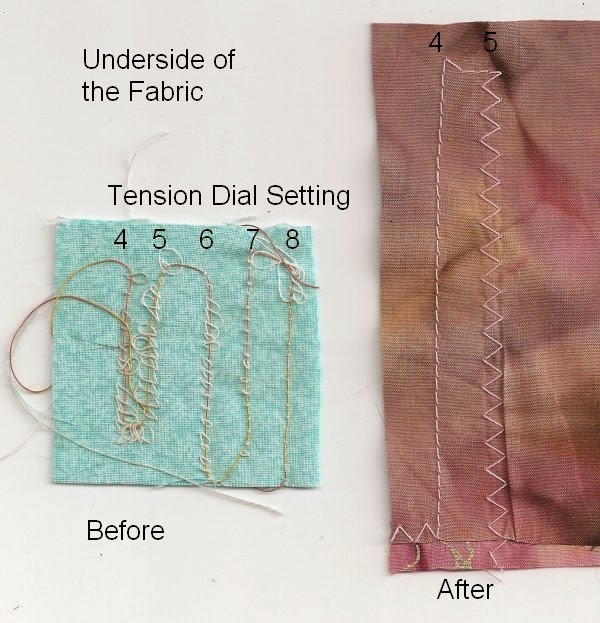 No matter how high I turned the tension dial, I got loops on the underside.  Checked the thread gaps and felt the hook and bobbin case for burrs and could find nothing wrong.  I disassembled the top tension and found nothing wrong there, either but after reassembling, the stitch looked like it should (the pink fabric on the right)  -Ed
Ed's Vintage Sewing Machine Store

Last week, Kathie was working up a notions order from her distributor and asked me if there was anything I wanted.  Strolling through the pages, I saw a neat-looking product called a Needle Grabber. 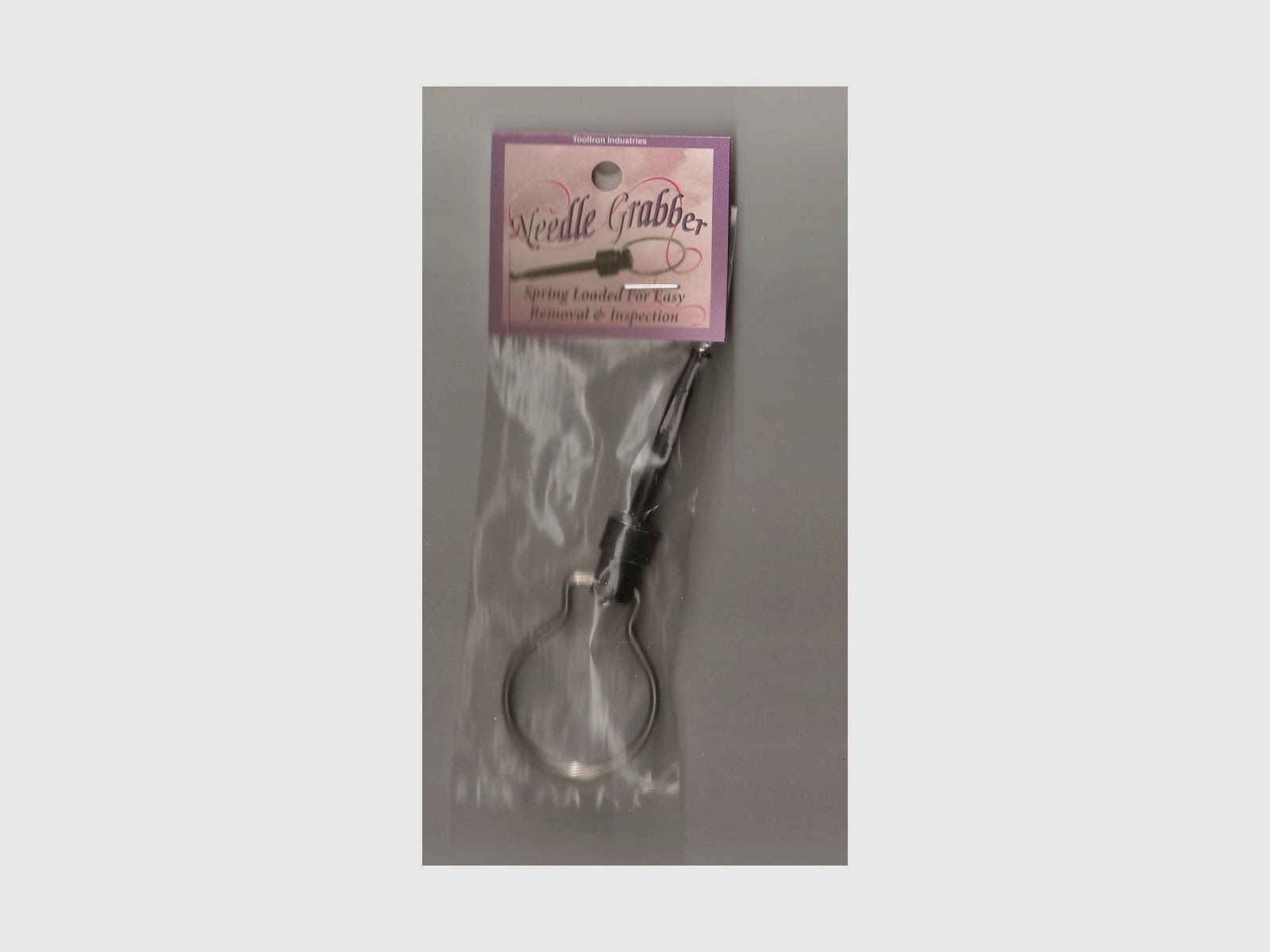 When they arrived, I took one out of the package for a look-see.  The third time I pushed the plunger, the metal hook broke off, the plunger fell out and the spring shot across the room. 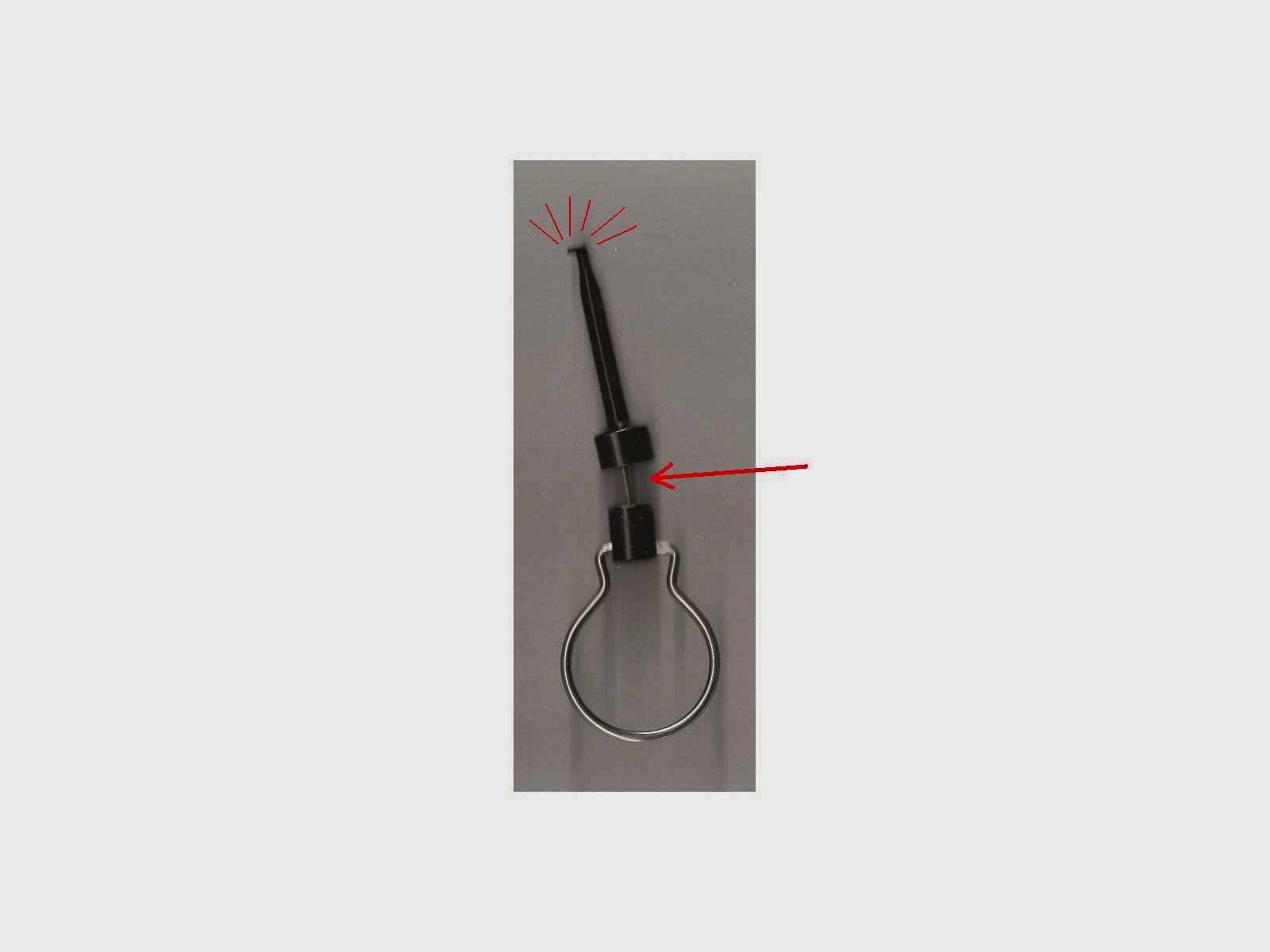 No way can I sell these, If you want one for yourself, order some needles from my Etsy shop and specify that you want a Needle Grabber and I will include it in the next two buyers' packages free of charge. Just be aware that you have been informed of the inherent dangers and that wearing eye protection when using would be advisable.

I am not happy with this machine. It is fussy about the material I try to sew, the stitches are too short for many of the things I sew, the friction wheel drive slips, and the knee lever speed control is too sensitive - I am constantly bumping it and running the machine without fabric under the foot. Anyone who sews knows what happens then, the needle thread gets caught around the hook and has to be worked out. The stitch and friction wheel issues might be correctable but I don't see any way to overcome the kneebar problem.

I have never done this before to a complete machine in good cosmetic condition but I am going to part this one out and sell the pieces in order to recoup my investment and free up space in my sewing room.

If you need any parts from a tan Supermatic, email me at my gmail address OldSewingMachines.