Guess What's on This Week's Auction

I can't believe I have never seen one of these before and now I see two in two weeks! 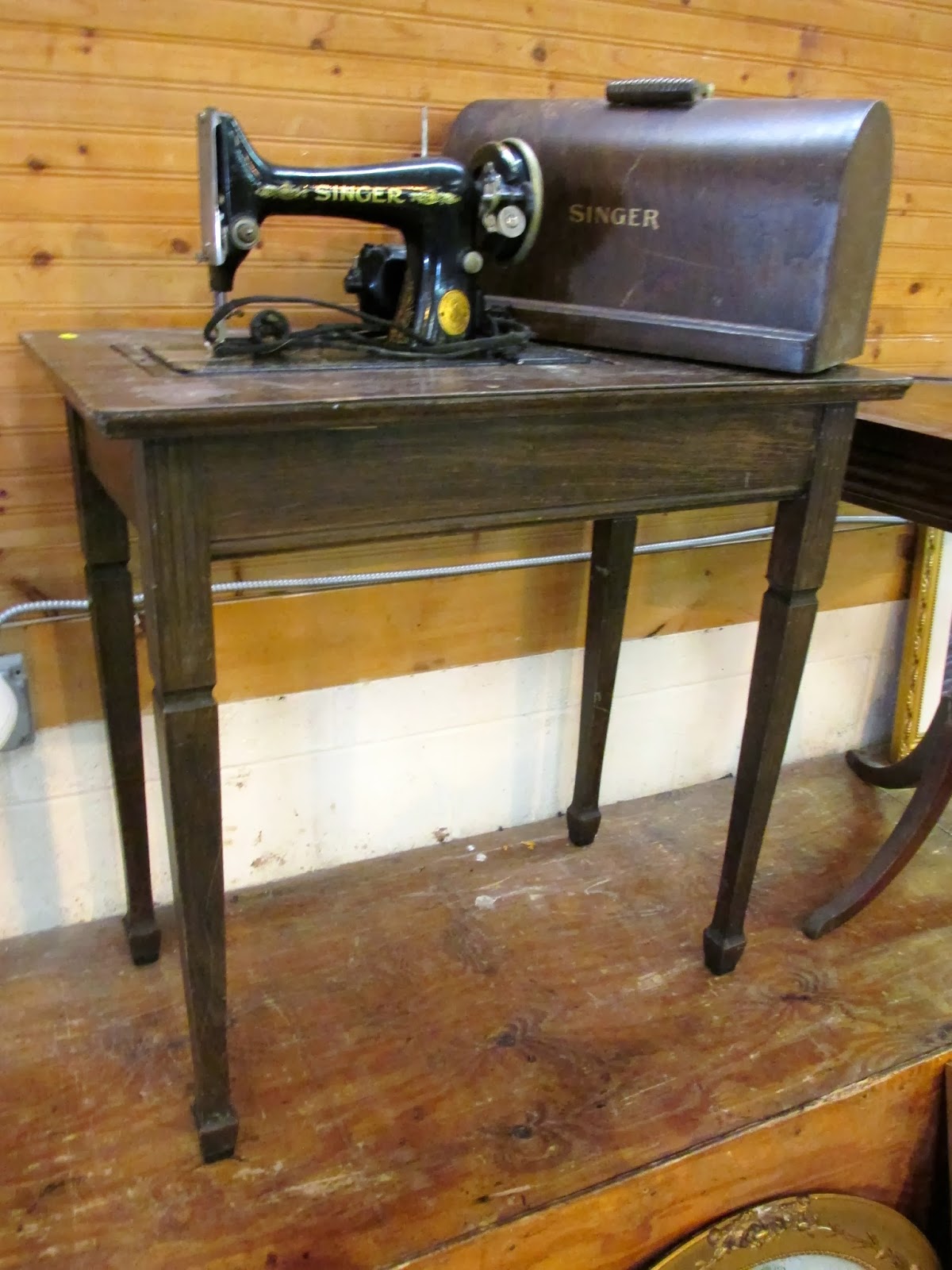 My first thought was that this is the same item on the two-weeks-ago auction that someone either didn't pick up or is trying to flip for a profit since the previous auction was "General Estate" and this week it's "Antiques and Collectibles" but I don't see the kneebar hanging down nor the second kneebar on the tabletop.  The sewing head appears to be in about the same cosmetic condition.  I tried to compare the scrapes and scratches in the two photos but that's difficult because the previous photo was taken from the front of the table and this one from the back. I do notice that the machine is backward, the needle end should be at the long end of the table, not the short end. -Ed

Trolling through the only thrift shop in this one-horse town, I saw a metal case which I almost passed up until I saw the open latch. 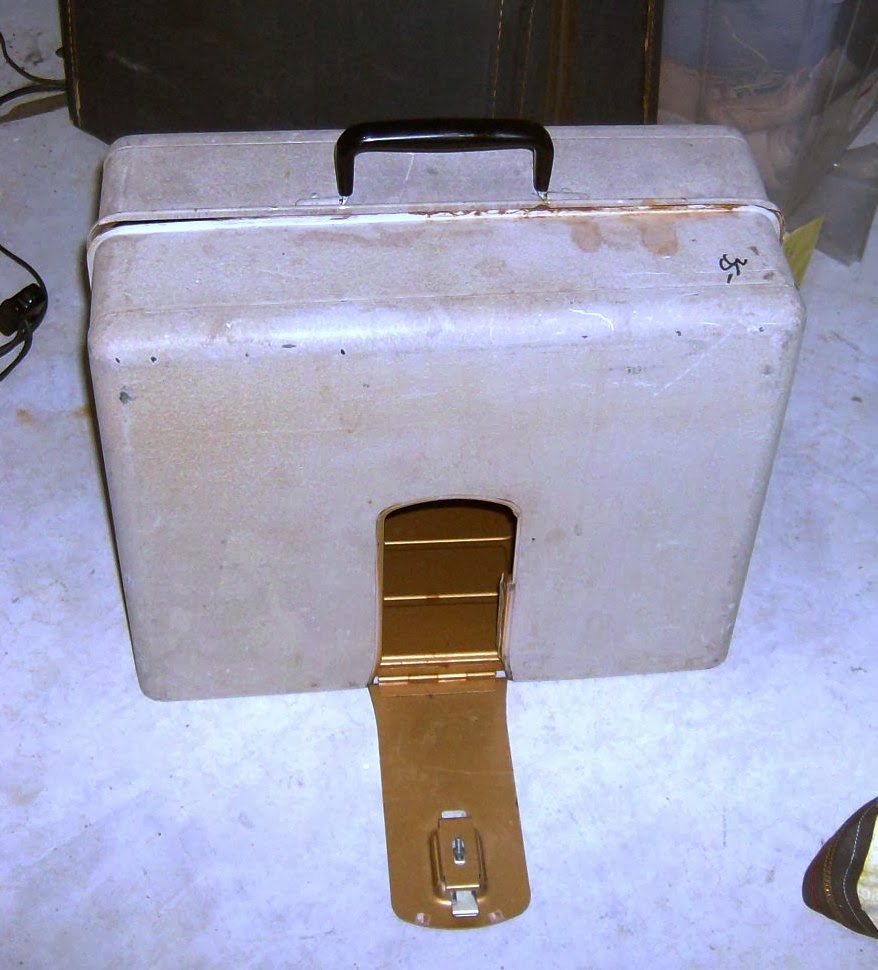 Elnas are not common in this area, but I have seen a few and knew that carrying case did not hold a manual typewriter, as I had first thought.  Inside was a vintage Elna Supermatic. 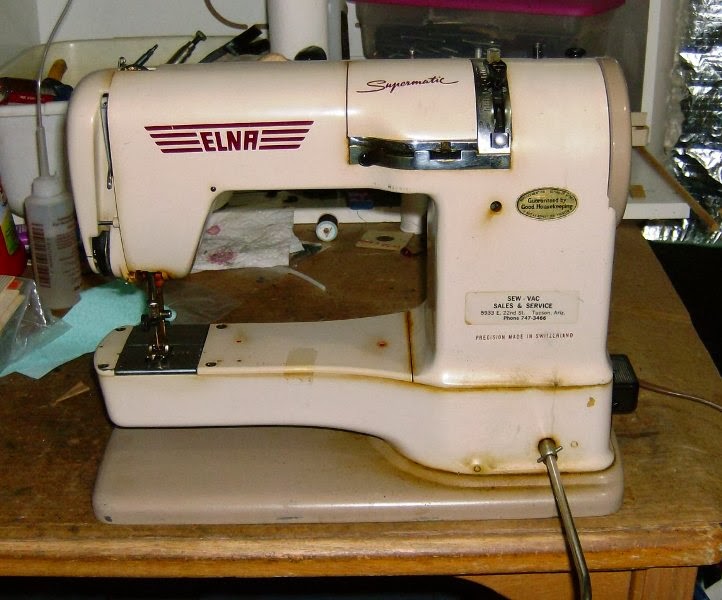 It is dirty but came with a zip-lock bag full of goodies:  Several instruction manuals and advertising pamphlets 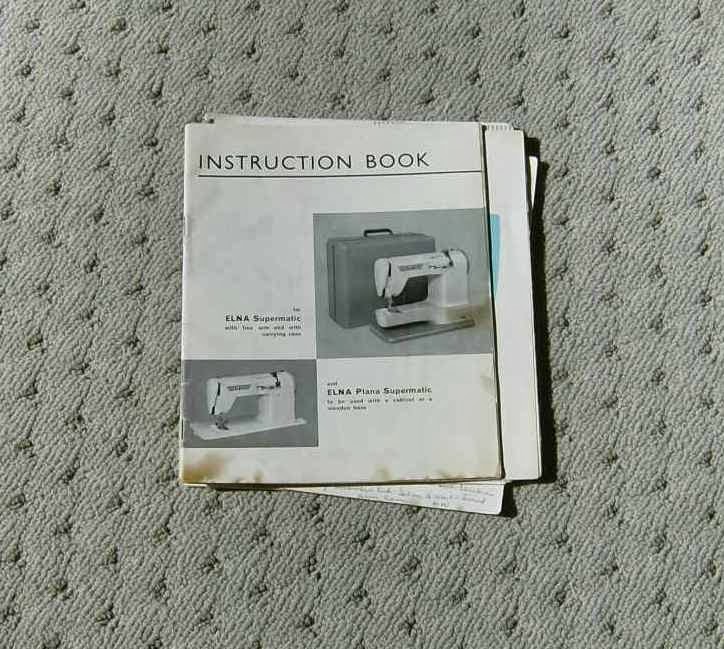 A baggie of presser feet and other accessories 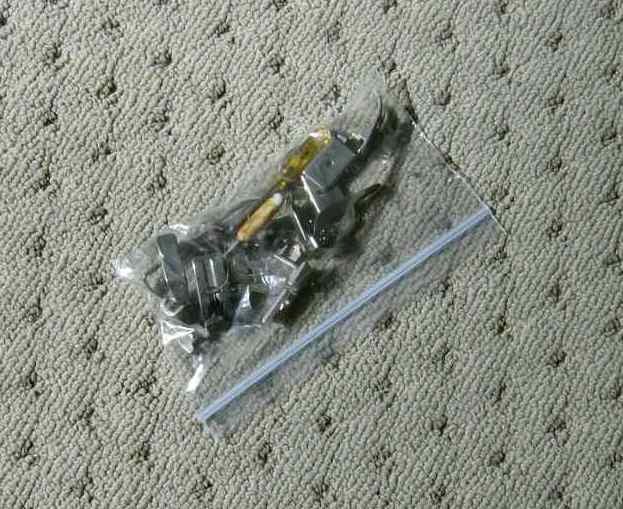 The knee bar which is necessary because it is the only means of powering the machine, there is no foot control. 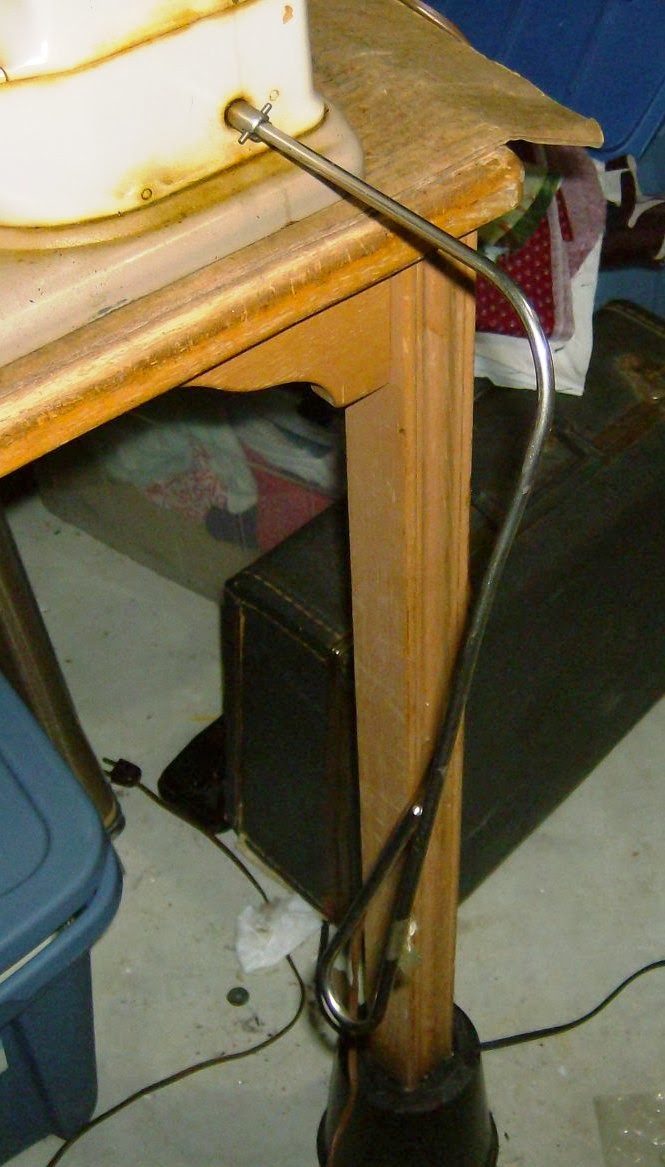 And a few cams 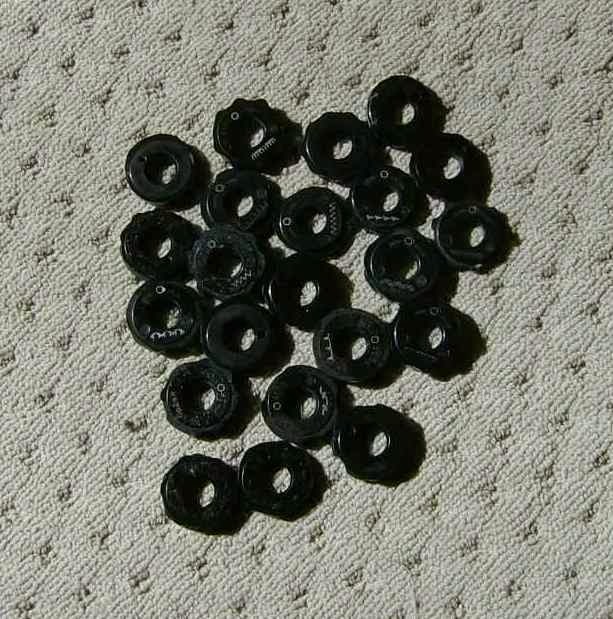 At $2 apiece, the cams alone are worth more than I paid for the machine!

The machine runs, although slowly, and the only problem I see initially is that the presser bar is frozen and the presser foot will not raise. A little penetrating oil should fix that.  Now to go clean it up and play a little.

Apparently more was frozen than the presser bar (which is now functional) because there was literally a pool of brown oil in the bottom of the freearm. Some of it leaked out when I had the head tipped over to remove the bottom plate, but there was still lots left. 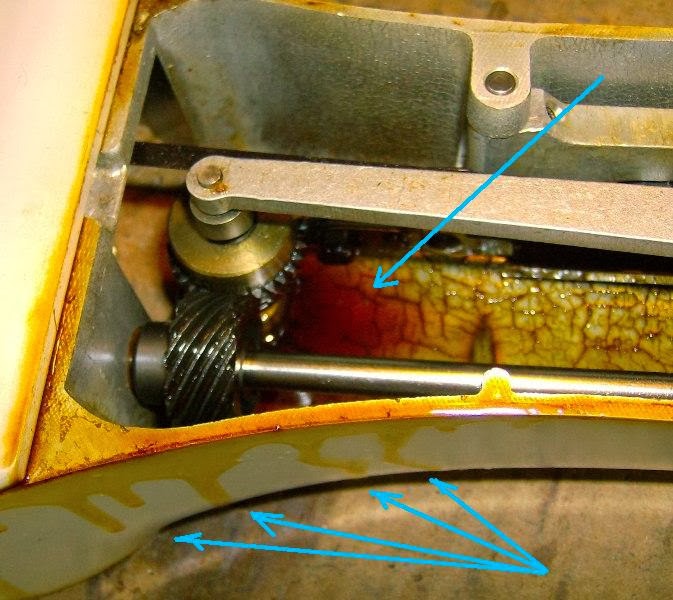 I have oiled many machines in my time but this was the first time I had to DE-OIL one!

It's all cleaned up and sewing, ready for fine-tuning. 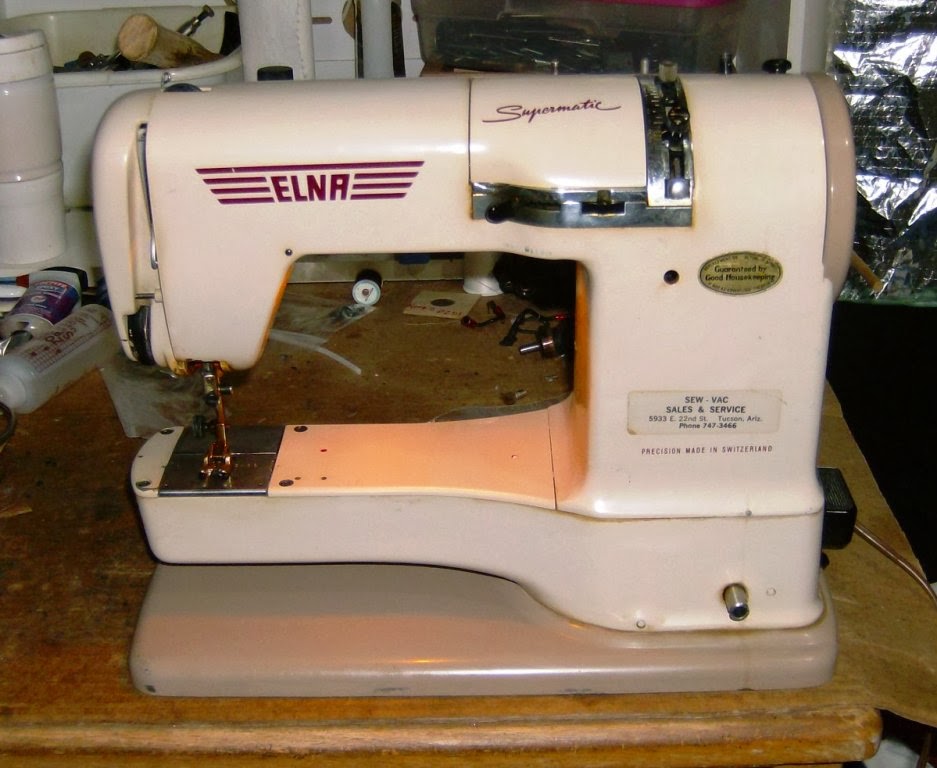 It growls and rattles a bit, probably just need to find the right spot to lubricate.  Also, it runs fast with no fabric under the foot but slows to a crawl when sewing.  Sounds like something is slipping in the drive train. 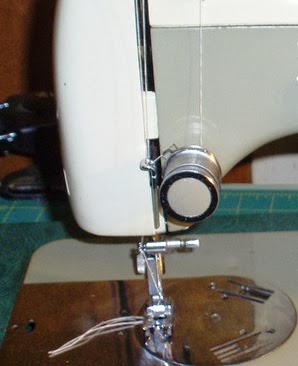 Hopefully, this procedure will correct that problem.

It is very important to check whether the position of the tension mechanism is correct.

-          Set the presser bar lever in its intermediate (embroidery) position. 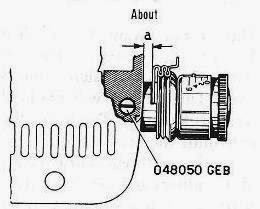 The first time I had to remove the balance wheel from a Necchi Supernova, I was a bit confused.  I removed the nut but there was no torque washer underneath and the balance wheel would not come off the shaft tail.  When I finally learned, I took photos and now Frank is having the same issue so I decided to post those photos to help Frank and anyone else who hasn't figured this out yet.

STEP 1 - Loosen the two screws in the knurled nut and unscrew. 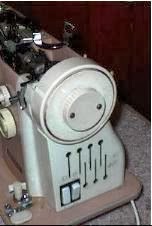 STEP 2 - The entire inner circle is the torque washer. 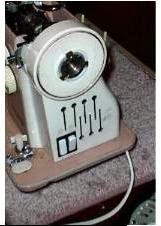 STEP 3 - Slide the washer off the shaft. 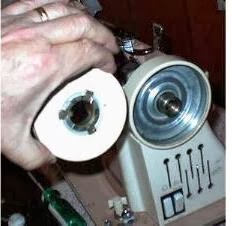 STEP 4 - Remove the belt and slide the balance wheel off the shaft tail. 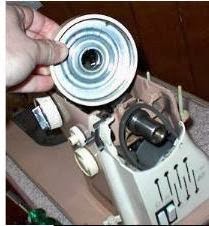 Installation is the reverse of removal. If the balance wheel does not spin freely when winding a bobbin, try swapping the two screws in the knurled nut. One is longer than the other and that's how Necchi solved the problem of the torque washer being installed backward.

We went to the auction last night and I'm glad I'm not in the beginning phases of collecting sewing machines, because I probably would have had to make two trips to carry home all my purchases in my minivan.

The first machine up for bids turned out to be a Wheeler & Wilson W9. This is kind of a landmark model because it was the last domestic machine made by W&W before Singer took over their plant and switched it to industrial machines. The 'W' in Singer industrial model numbers like 111W155 indicate they were made at the former Wheeler & Wilson factory.  Regardless of the collectability, this machine only brought $45. 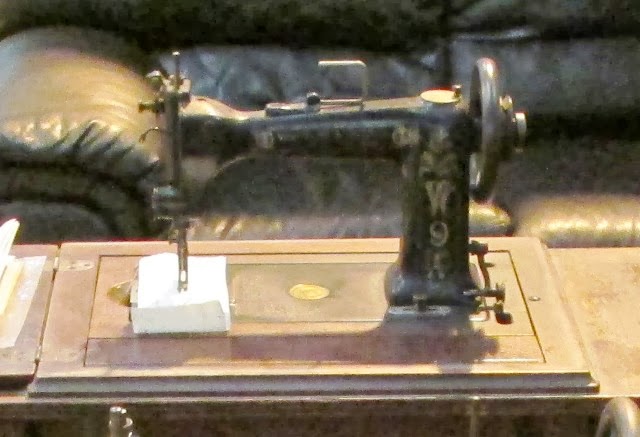 Next was the Singer 15 in a 6-drawer cabinet sitting next to the W&W. 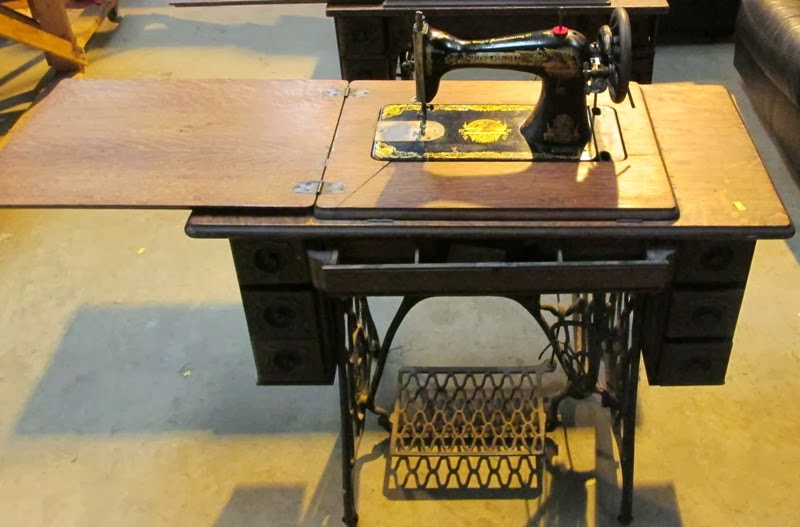 Being a more recognizable name and in obviously better cosmetic condition, bidding ended at $65.

After a delay while they auctioned off tray lots and box lots of household items, they came to the Martha Washington sewing cabinet. 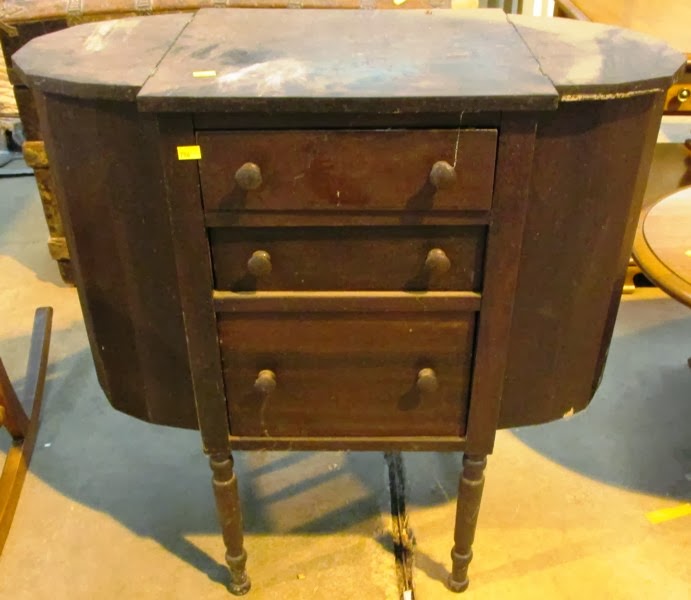 We have two of those and paid over $100 for each.  This one needs some love but appears to be in original condition.  It only brought $40.

Last, they got to the Singer 99-13 portable in the drop-in table.  I got a chance to look underneath during the preview and learned that that kneebar hanging down below the table is physically connected to the machine, not a separate controller. Space was tight under there and I didn't have a flashlight so I couldn't investigate further. This was the only machine I even considered bidding on solely because of the uniqueness of the table but bidding got to $85 and I was unwilling to spend that more than that for a very common machine in an intriguing table.

I had hoped there would be some vintage sewing attachments and accessories separate from the machines.  There were several boxes of sewing "stuff" but it was just thread, needles, binding and other notions I would never use, so I didn't even stay to see what they sold for.  For an evening's entertainment, I spent $1.95 for a soft drink and came home empty-handed.

I was surfing the local auction website to see what is up for sale Friday evening.  First thing I noticed was this neat little table designed to hold a Singer 99 in the beehive case without removing the head from the base.  I have been collecting old sewing machine for over 40 years and have never seen a table like this. 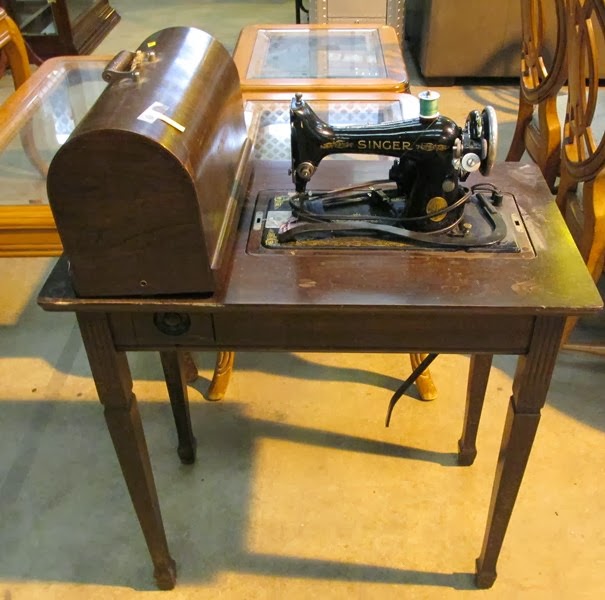 I see a kneebar on the machine and a knee control under the table, I have no idea how the machine is controlled when it is mounted in the table.

Next, I saw these two machines 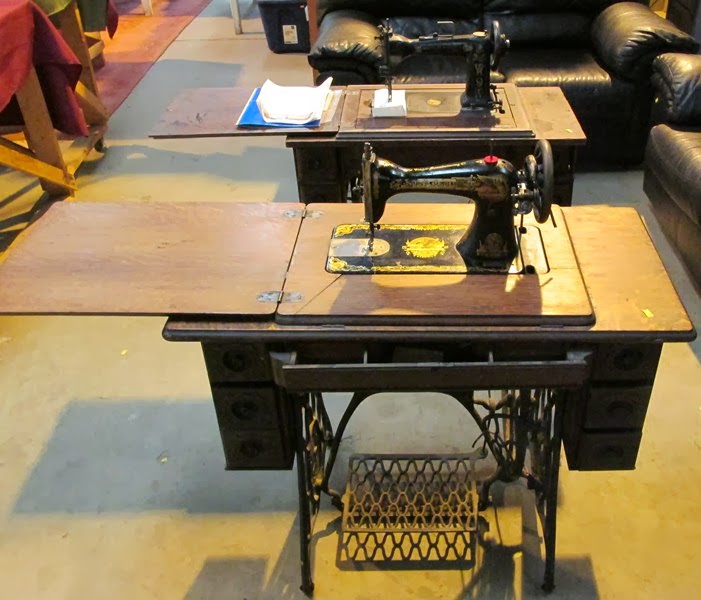 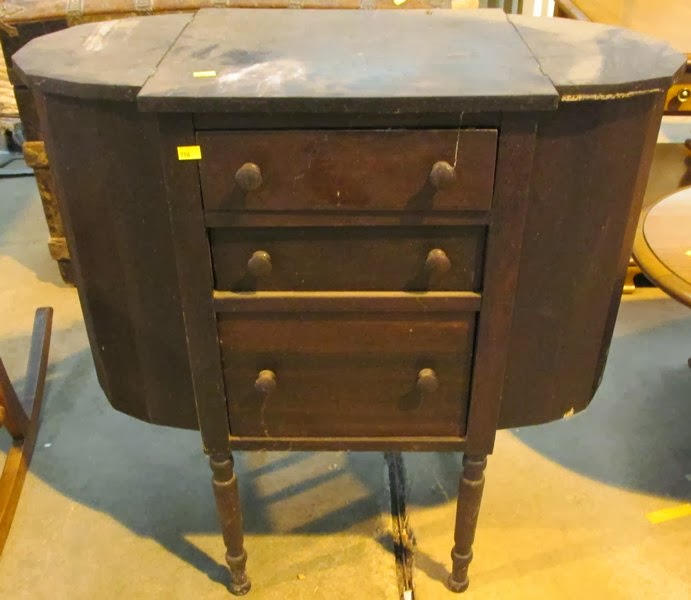 I'm beyond black straight stitchers and don't have space for treadles but with all those vintage sewing machines, this must be the estate of someone who sewed for many years and there might be some other vintage sewing paraphernalia worth bidding on.  I just might have to go and scope it out.

This is not specifically about sewing machines, but closely related:

When we had the store, we stocked the large 1200 yard spools of Star Thread made by Coats and Clark. 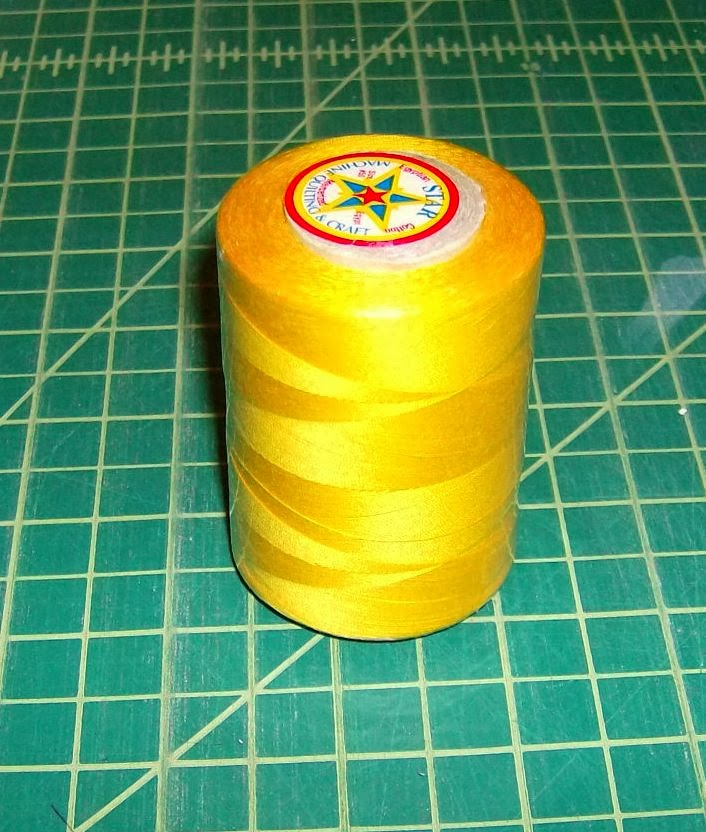 The problem buyers encountered was that the hole through the center of the spool is 5/8 inch in diameter, the spools wiggled and rattled when installed on the sewing machine's spool pin and the thread unwould unevenly. 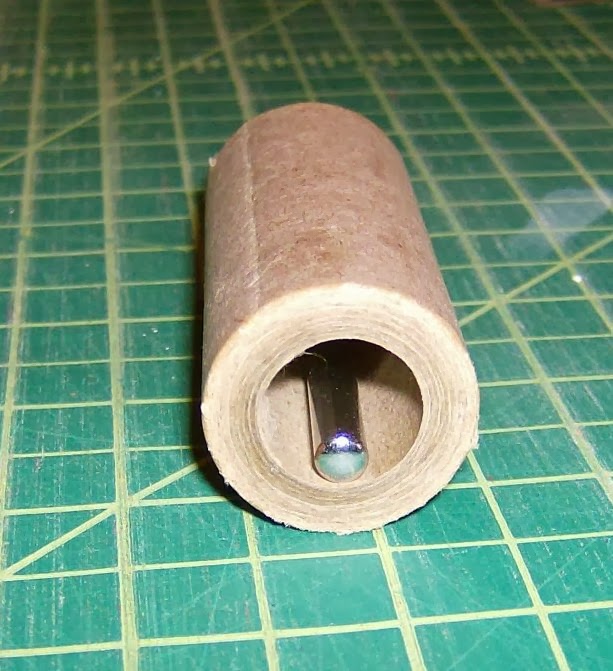 My solution is to use a thread stand but not everyone wants to carry a thread stand along on sew-ins and retreats.  We still have a couple of dozen spools of Star and it's not selling in Kathie's Etsy store so it looks like we are going to have to use it up ourselves.

I slipped the smaller tubing inside the larger tubing for 2 1/2 inches (the length of the Star spool) and sliced it off with a utility knife. 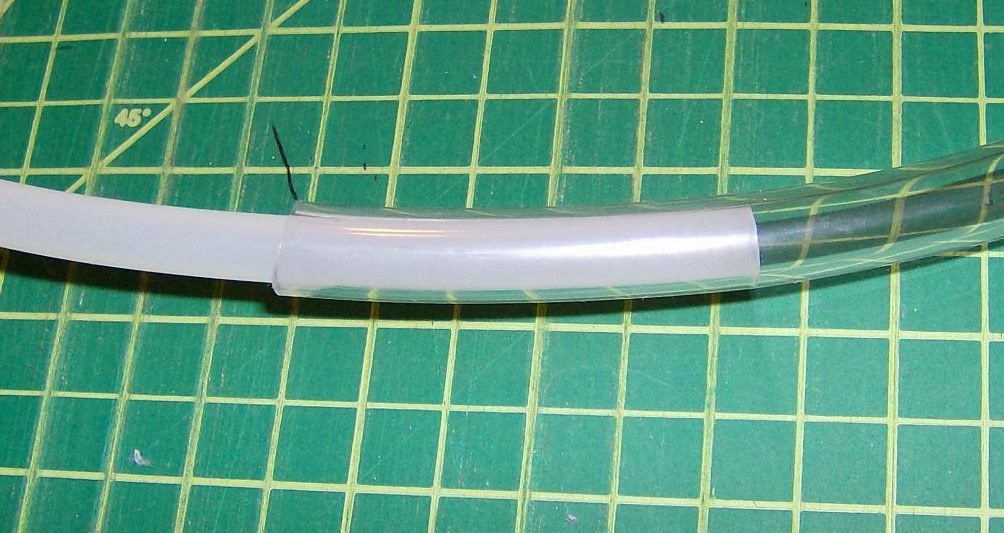 The 1/4" inside tube fits snugly over my spool pin and the 1/2" outer tubing takes up most of the space inside the Star spool so there is less rattle and the thread comes off the spool more evenly. 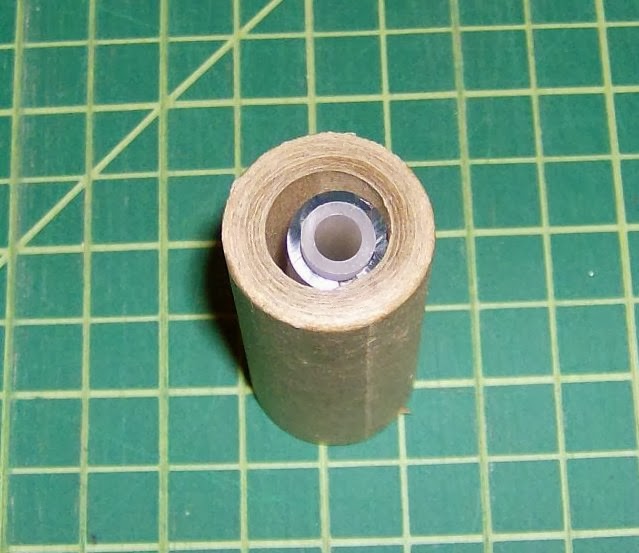 I can make 5 inserts for 60 cents worth of tubing.  Maybe providing an insert with each spool of thread will spur some sales, I already have enough thread to last my lifetime.