Who Let the Feed Dogs Out? 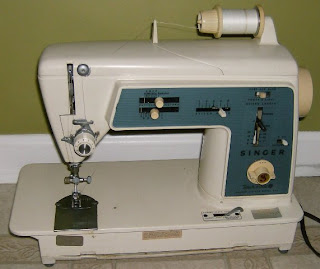 Singer 645
Back in the middle of the 600 Series Touch & Sews, Singer decided that rubber-coated feed dogs would be a good idea.  They would feed even the finest of fabrics without snagging or leaving marks on the fabric. 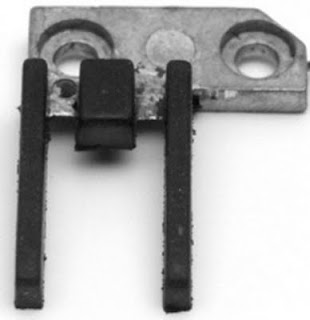 Unfortunately, Singer forgot that rubber and sewing machine oil don’t play well together and the rubber coating on the feed dogs softens and crumbles off.  When that happens, fabric will not feed and the machine will not sew.
A couple of weeks ago, a friend asked me to look at a 645 that she picked up at a thrift shop.  The first thing I saw was that the rubber had melted and was all out of shape. 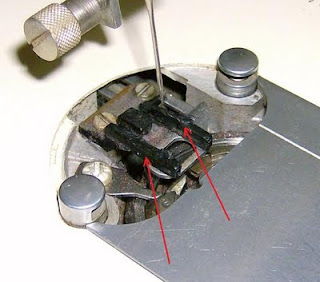 Before investing $20 in a new feed dog, I looked at the internal gears.  This series not only has a rubber feed dog, but plastic internal gears, also.  All the plastic gears appeared to have been replaced because they were all black.  The original gears were white and turn yellow/brown with age just before they crumble and break.  Someone had spent a good deal of money having those gears replaced and I have not yet seen a black replacement gear crack or break.   The machine ran quiet and smooth, so I decided it was worth the money to replace the feed dog.
Rubber-coated feed dogs are available but there is another option.  After a few years, Singer realized that rubber-coated feed dogs were a mistake and went back to metal feed dogs with teeth.  Those feed dogs from later model 600 series Touch & Sews fit perfectly where the rubber feed dogs were. 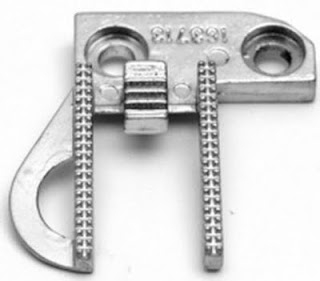 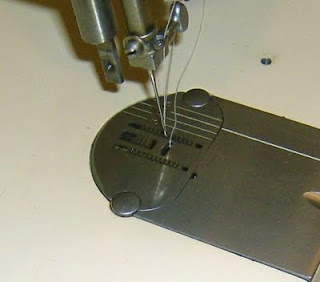 After seeing this machine, I am re-thinking the plastic gear issue and might try replacing a full set myself next time I run into a 600 series Touch & Sew that needs re-gearing. 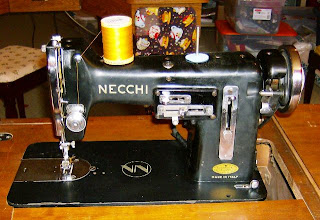 I have a soft spot in my heart for the Necchi BU because a $10 one from a thrift shop was my first exposure to the quality and sturdiness of Italian-built Necchis and Necchis have been my favorite machines ever since.  A few of the post WWII Japanese machines come close, but I have found none yet that can match the smooth, quiet sewing of a well-oiled Necchi BU or Supernova.  Anyway, this BU had been relegated to my storage shed for several years at the old house and sitting in the garage at the new house since we moved in a year ago.  It has been so long since I used it, I don’t even remember why I initially put it in storage.  It isn’t pretty by any means, paint on the bed is cracking, paint on the head is dull and the chrome is beginning to rust.  I vaguely remember tension issues, but can’t be sure after all this time.  I decided it either had to be rehabilitated or stripped for parts.  Either way, it was not going to take up precious garage space any longer.
On the workbench, I found that the balance wheel would only make about half a rotation so I lubricated every friction point with Tri-Flow Lubricant and worked the balance wheel back and forth for about half an hour.  Things weren’t getting any freer, so I got out a spray can of Permatex Ultra Slick Synthetic All-Purpose Lubricant and sprayed that all over the underside and inside the machine.  In short time, the mechanism freed up and the motor spun the machine so fast I thought it was going to take off!  That lasted for about a minute, and then it froze up again.  This has been my experience with the modern wonder lubricants - they don’t do what they advertise and don’t last.  Resorting to the old standby sewing machine oil, I oiled the machine and in just a few minutes had it running like new. At least the modern wonder lubricants broke the mechanism loose so the sewing machine oil could do its job.
The next issue was mounting the head in a cabinet.  Original ads for the Necchi BU stressed the fact that many parts of the machine were common and repairs would not be a problem.  But for some odd reason, the holes for the cabinet-to-machine mounting hinges are smaller than all the rest and standard hinges will not fit in the holes.  It's virtually impossible to find a set of the correct hinge pins.  In the past, I have reamed out the BU holes to accept standard hinges but am afraid that might weaken the bed and the weight of the machine could cause the metal of the bed to crack and the machine fall out of the cabinet.  Now, I take a standard set of hinge pins and grind them down just enough to fit the holes in the BU.
This was not the last of the problems, though, when I attempted to sew a test patch, the material wouldn’t feed and when it did, stitch length was not consistent.  It also felt like the presser foot was not doing a good job of pushing the fabric down against the feed dog.  I lowered the presser foot about a quarter inch and stitch quality improved. I haven't permanently solved this problem, I think the presser foot is not original Necchi but an industrial high shank foot.  Many folks don't realize that high shank feet and industrial feet are the same thing.  If you have high shank machines and need feet, investigate the industrial feet sold on eBay for options.  Anyway, I will try replacing this one with a Necchi foot to see if it makes any difference, if that doesn't fix it, I will lower the presser bar a bit. 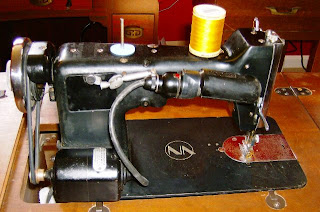 One thing I like about this machine is the light.  It has “Necchi” embossed on the shade, so I am fairly sure it is a genuine Necchi light but it is mounted using a swivel with multiple joints so the light can be repositioned an infinite number of ways.  If I ever decide to get rid of this machine, I will definitely keep the light.
Posted by Unknown at 6:19 PM 19 comments:

A Squid in My Jeans?

With all my recent business travel, college visits with my Rising Senior Daughter, and family illnesses, it has been a long time since I last posted.  To get back in the swing, I am going to start off with a simple recycled jean project.
In Big Lots yesterday, I spotted a cell phone charger on sale for $8.  That’s not a great price, except this model had a charger that would plug into either a wall socket or a car cigarette lighter and six different “heads” to fit many different phones.  I could see carrying only one charger and using it to charge my daughter’s Motorola, my Blackberry, and my wife’s LG either in the minivan or in a hotel room.  I envisioned the cable looking like a squid with a head shaped like a USB plug and six tentacles streaming out behind.  In that configuration, I could conceivably charge all three phones simultaneously. 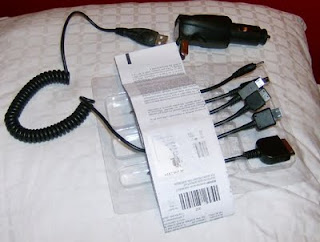 Unfortunately, when I got home and opened the package, I found the squid head shaped like a USB plug, but the tentacles were separate adapters that plugged individually into the South end of the squid.  So, I can only charge one phone at a time and I had to come up with some way to keep track of all those loose adapters. 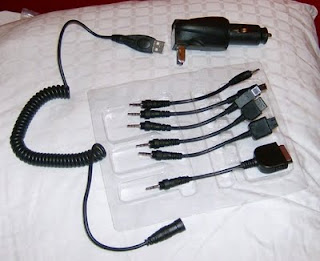 Knowing that I had a pair of discarded jeans on my cutting table, I decided to recycle that fabric, rather than buying new.  As I looked to find the best place to cut, I noticed a rear pocket and decided that if I could incorporate that pocket into my design, half of the cutting and sewing had already been done for me.  I cut out the pocket leaving about one inch of fabric all around. 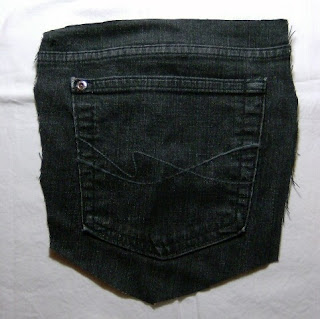 Next, I cut a chunk from the bottom of a leg, keeping the hem intact.  I trimmed that piece to the exact shape of the bottom and sides of the pocket, with about 2-3 inches extra at the top to serve as a cover flap. 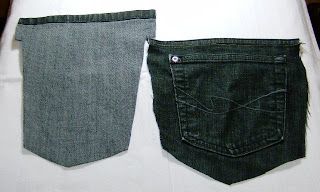 I rolled over the fabric above the pocket and made a hem.  Then, I measured and sewed six even slots in the pocket to hold the six adapters. 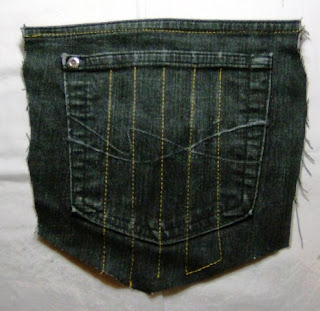 Next, I sewed the pant leg piece to the back side of the pocket and rolled the extra fabric from around the pocket to the back side and sewed along the pocket seam to hold it.  I could have been neater if I had taken more time, but thinking this would only be a prototype, I was more interested in getting it done quickly. 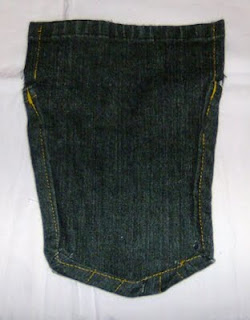 After coming up with some way to fasten down the flap, the six adapters fit snugly in the pocket and the charger and squid live in the compartment behind the pocket. 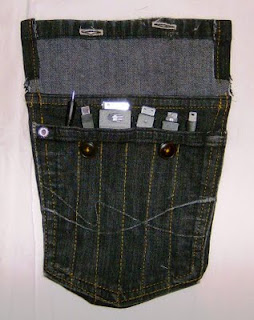 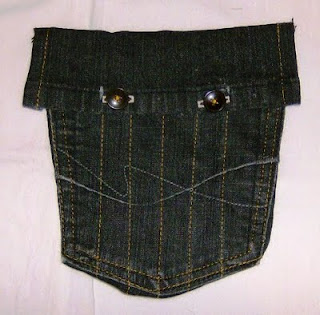 To keep this on topic, I was going to discuss the Necchi BU I used for this project, but this post has gotten so long I will save that for another day.
Posted by Unknown at 7:22 PM No comments: