I was trolling the local Habitat for Humanity ReStore this morning and saw something I didn’t know existed – a blackside Singer 15-91! 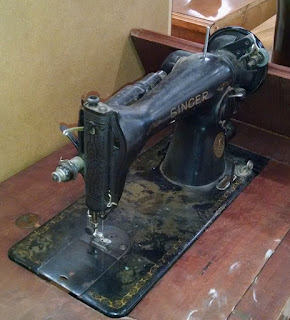 I know that several Singer models received the blackside treatment on faceplate, slide plate, and needle plate from 1941 to 1953 but had only seen it on 128s, 66s, and 99s.  According to the Bluebook, the 15-91 was manufactured from 1933 to 1956 so the production was within the period of blackside machines, but in my 40 plus years of collecting vintage sewing machines, I have never seen a model 15 in blackside.  I thought about buying it but after considering  condition, price, and space to put it, I let it stay. 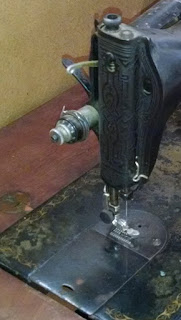 I have not been very faithful in posting on this blog or answering questions because I have had other priorities.  We sold our big house and bought two small houses – one in Maryland for summers and another in Florida for winters.  The Maryland house was a fixer-upper and required much work.  Patching and paint on every paintable surface, all new flooring, all new appliances, leaking toilets and other things.  Then we discovered that the gas line to the cooktop was leaking and, since the line is buried inside the concrete slab foundation, we had to have a new line run through the attic.  We still need to get that line boxed in to get it out of sight.  About the time we got things kinda wrapped up in Maryland, we went to Florida just in time to have Hurricane Irma blow the carport off that house. 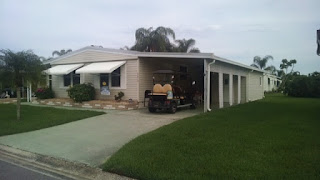 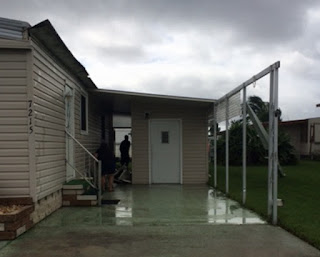 Fortunately, there was almost no damage to the house (just a small puncture in the roof) but it has been about ten weeks now and the contractor has not come to replace the carport.


I will probably not be posting as often as I used to because I just don’t have much to talk about.  All my vintage sewing machines are gone and the supply seems to have dried up around here.  I occasionally see a rusty hulk that was probably pulled out of a barn after decades of storage and a few Asian machines but nothing that sparks my interest.

I don't think I've come across a blackside in person. I have way too many machines, and really need to downsize. Good luck with all the repairs on the homes.

Oh no Ed, so sorry to hear this (I was hoping you guys escaped the wrath of the hurricane) but at least it was 'only' the carport roof! I imagine the contractors are all up to their ears in repair work. Fingers crossed the roof is back on soon.

I haven't seen a blackside in the 15 series either, but guess it was a matter of resources during those years? My understanding was the plants used up the parts they had and then went to the chrome-less parts during the rationing period as they ran out of old stock. So maybe there are a few more oddball 15's out there. Getting a picture is a good way to collect a machine- the pic takes up less space.

Moving is a huge energy drain. Two houses! Best wishes with the reno.....

Maybe more sweet old machines will appear when it becomes known in the new locations that you like them. I don't think I've ever seen a blackside machine of any version in person. Or on-line for local offerings, come to think of it.

Glad to see you're getting things squared away on the home homes.

I am new (a year or so) to this particular rabbit hole (vintage sewing machines, though I've sewn on an old Kenmore 148 for decades)... Earlier this year my cousin gave me Grammy's machine, a 15-91, in need of some work (I oiled and got parts moving and let it set, have too many other things going on-I think it needs the motor redone). And then this summer saw a blackside 15-91 at the Zimmerman House in Manchester, NH, one of Frank Lloyd Wright's later houses. I'm so sorry they wouldn't let us take photos, because he built the table it sat in. And I got so excited and was telling the docent, but he just didn't care. Which is way too bad! Glad I found your blog, I'll be checking out past posts. Good luck in FL!

Oh, Ed, congrats on both homes but wow, having been a two home owner for awhile I know how time consuming it is. I am trying to decide what to do with my three vintage machines that you serviced for me maybe four plus years ago. I love the "idea" of them so much but I find that I don't use them since as a garment sewing person I love the modern features on my every day machines. But you and others remind me of the power and longevity of these vintage machines and I can't quite part with them. Hope you are in FL by now and enjoying sunshine, at least, if not yet a great deal of warmth. we leave for our Florida rental in two weeks and I am looking forward to the stay and then a return when spring has really arrived in MD. Cheers and thank you for the update. (Warning, in my experience, lots of nice vintage machines in FL. That's where my Necchi came from.)

HI ED!!!
Sorry to hear that both of your houses have had some large and small disasters.
I am glad to hear from you

I hope you are doing well, probably in Florida now, right?
I know moving is a major ordeal, I told you the long grueling tale of my parents.
My life is still crazy, but I always think of you and the help you generously offered to me with the 301 and also general advice. You are a great friend
I hope both of you are enjoying yourselves.

I do have questions about my mom's 316G, but I do not want to bother you.
Please know that I am so very grateful for your generosity in sharing your knowledge
Always, Rosemary Bolton

I admire the strength needed to distribute all your loved machines. I took took the brunt of Irma and lost my 2 Kennies in the process along with anything that would not fit on a motorcycle. Now I have fallen back into the trap. You fix up the machine, fall in love with it and can't give it up. I need to put on sewing machine blinders. Good luck with your projects. I had a cringe when I read of the gas line leak and the fact it ran through the concrete. If you do start rehabing machines I would love to read about it.